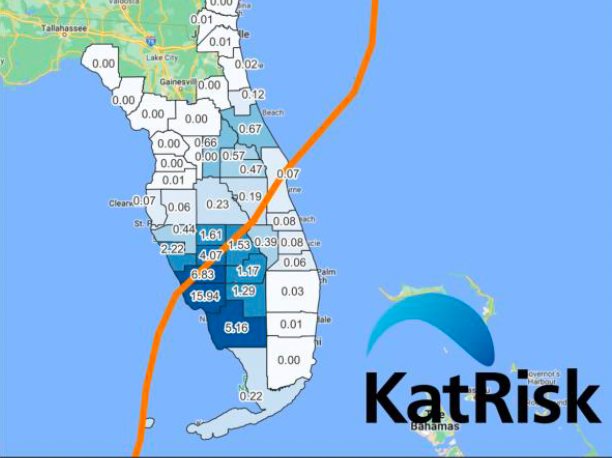 KatRisk’s use of a standard deviation around its estimate implies something in a range from almost $30 billion to as high as $62 billion, so puts its figure right around where some of the catastrophe risk modellers currently stand (for example, KCC at around $63bn and Verisk at up to $57bn).

What’s interesting about the KatRisk economis loss estimate for hurricane Ian is that the flood component is higher than for other catastrophe modellers.

KatRisk is intimately familiar with the NFIP’s exposure, having been the third-party catastrophe modeller on all of the flood insurers FloodSmart Re catastrophe bonds.

KatRisk’s estimate breaks down as follows:

At the level of storm surge and inland flood economic loss KatRisk estimates, which is including the NFIP, it is a strong suggestion that the NFIP’s share will be significant and that may put its reinsurance tower at-risk.

We’re told the NFIP’s flood insurance losses could well be into the lower layers of its reinsurance tower, which also means some of its FloodSmart Re catastrophe bonds would be likely to attach as well.

There still isn’t any clarity as to the level of losses the NFIP faces, but KatRisk’s modelling is well-attuned to the NFIP, given the work it undertakes for its reinsurance buying from the capital markets, so its figures could prove more accurate than other early estimates for water-based damages from hurricane Ian.