Australian primary insurance group IAG has revealed that its Orchard ILS Pte Ltd catastrophe bond was triggered and then fully exhausted by claims suffered from the severe bushfire season in the country.

The Orchard ILS catastrophe bond was the first to be sponsored Insurance Australia Group (IAG) back in February 2019 and also became the first cat bond transaction to be issued under the Singapore ILS regulatory regime, using the domiciles Special Purpose Reinsurance Vehicle (SPRV) regulations.

That means the Orchard ILS cat bond was exposed to all of the natural peril events that struck Australia this last summer, which included damaging east coast storms and hail events, and the severe bushfire season, among others.

This morning IAG has revealed that the bushfires exhausted the coverage provided by the Orchard ILS cat bond, causing it to need to add a short-term replacement chunk of aggregate reinsurance where the cat bond had previously sat.

The erosion and default of this catastrophe bond must have happened earlier this year, as IAG said, “The catastrophe bond which formed part of the aggregate protection was fully exhausted by the bushfire events which extended into January 2020. This was replaced for the period to 30 June 2020 only.”

We can only assume that’s the Orchard ILS transaction, as we know of no other cat bond sponsored by IAG.

This hadn’t come to our attention as the transaction was not broadly syndicated and was never included in broker secondary market pricing sheets, so visibility of its erosion and eventual total loss was not available to us.

In announcing its results this morning, IAG’s CEO Peter Harmer explained the impacts of natural catastrophes on the insurers financial year.

“The severe natural peril events have of course had a financial impact on our business and in the final quarter, a number of smaller ‘attritional’ natural perils brought our net natural perils claim costs to $904 million, exceeding our revised guidance of $850 million and original allowance of $641 million,” he explained.

The result was more than A$700 million of reinsurance recoveries across its program (out of A$900m net and before quota shares), made up of $150m under the calendar 2019 main catastrophe cover, around $150m under its calendar 2020 main catastrophe cover, more than $300m under its calendar 2019 aggregate cover, $101m from its FY20 stop-loss cover, and roughly $16m under the calendar 2020 aggregate cover, following full erosion of the attached deductible during 2H20.

The insurer has now shifted its aggregate reinsurance protection to run alongside its financial year, so renewing at the July 1st renewals and for the next year the replacement segment for the exhausted catastrophe bond remains, as the graphic below shows. 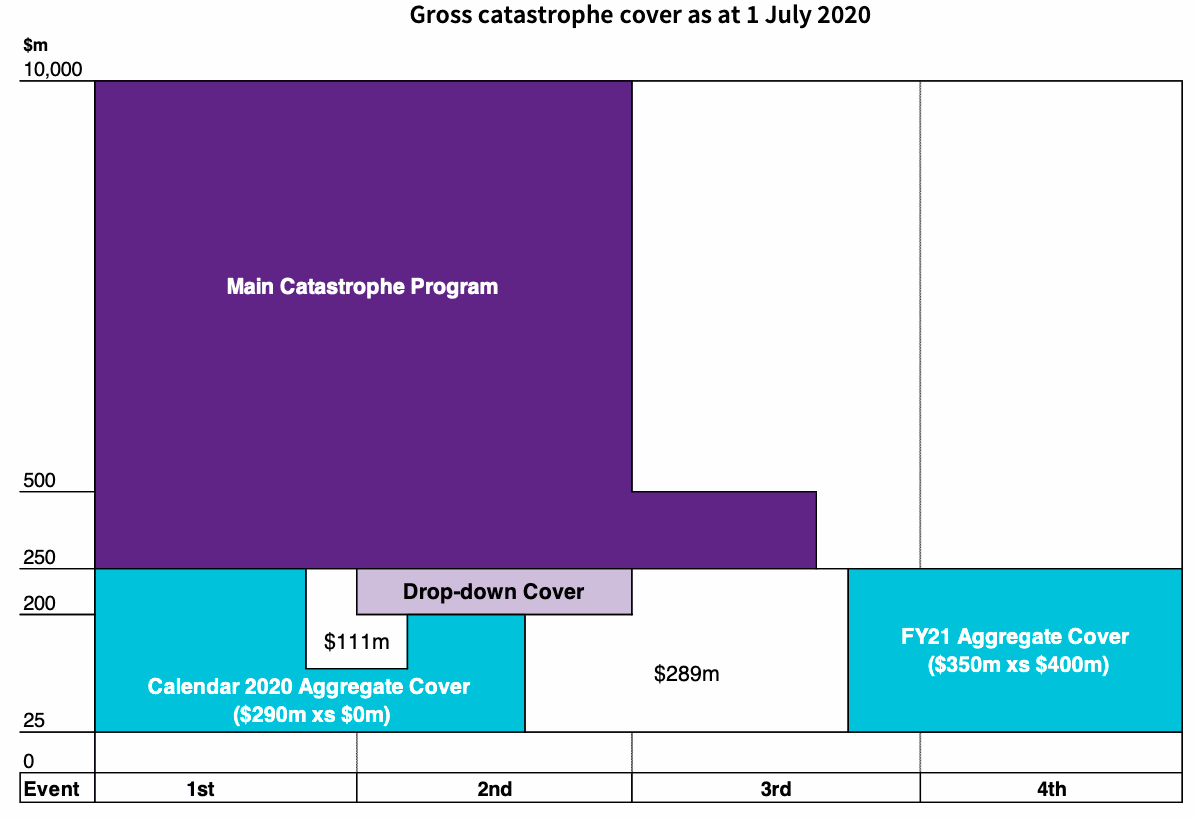 The insurer has increased its gross catastrophe allowance for the coming financial year to AU $975 million gross, AU $658 million net, around a 2.5% increased to account for the rising toll from severe weather and fires in the country.

The company increased its catastrophe reinsurance coverage at slightly higher rates at the renewals, adding more aggregate protection to run through the coming fiscal year, as well as a replacement for its drop down aggregate and also the gap left behind by the exhausted Orchard ILS cat bond.

IAG still has around A$290 million of its calendar year 2020 aggregate reinsurance left as well, with the new fiscal year aggregate kicking in alongside this from July.

So IAG’s first catastrophe bond Orchard ILS Pte. gains the unfortunate title of becoming the first Australian cat bond to ever be triggered and pay out in full, as well as becoming one of only a handful to be triggered by wildfires and perhaps only the second to ever become a total loss just from impacts of the wildfire peril.

We’ve added IAG’s Orchard ILS Pte. catastrophe bond transaction to our list of cat bonds that have defaulted, paid out or triggered.