Hurricane Isaias, which impacted the Caribbean, made landfall in the Bahamas, then raked the Florida coast, after which it made landfall in the Carolinas and went on to impact the U.S. northeast including New York, is expected to cause insured losses of more than $1 billion. 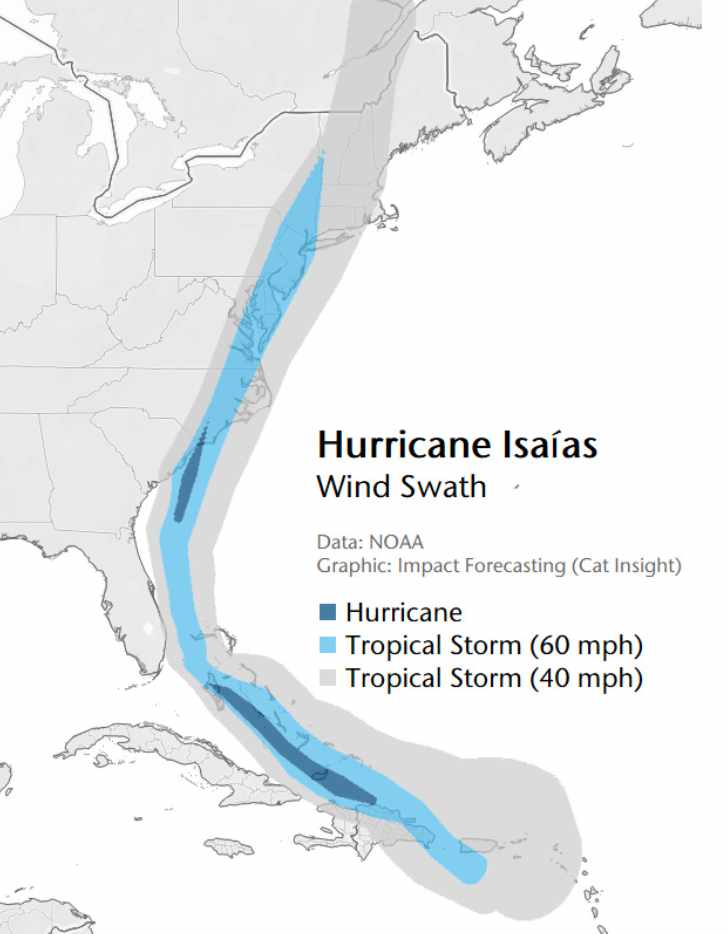 Hurricane Isaias only managed to become a Category 1 hurricane, with its maximum sustained winds reaching around 85 mph, after it had struggled through the Caribbean and alongside Florida due to wind shear effects.

But still, the impacts are particularly widespread with this long-tracked hurricane and the nature of its path alongside Florida and the U.S. eastern seaboard, then coming ashore and bring strong tropical storm force winds to a wide swathe of the northeast, means its insurance and reinsurance market loss will be the highest of the 2020 hurricane season so far.

As the graphic in this article shows, hurricane Isaias lost its hurricane intensity before coming closest to Florida, but then managed to regain it and intensify back to 85 mph winds before landfall in North Carolina.

The extremely warm waters along the eastern seaboard suggest this risk of close-in intensification could be a feature of this years hurricane season, which as we explained yesterday is expected to be extremely active, so is something to watch out for as storms approach the U.S.

But as hurricane Isaias moved north it interacted with the jet stream and weakening was minimised, meaning strong wind gusts were experienced in a very wide area, as well as rainfall and some tornadoes.

It was this passage through the northeastern U.S. that looks set to drive the largest portion of the insurance and reinsurance industry loss from hurricane Isaias, with Pennsylvania, New Jersey, and New York all particularly affected by the storm.

Storm surge along the coast was also seen to be particularly high, considering the strength of hurricane Isaias.

The highest official surge was 5.4 feet (1.6 meters) at Wilmington, North Carolina, which Aon notes was the third 1-in-100 storm surge event to be recorded in the past five years (Isaias, Florence, Matthew).

At least 30 unofficial tornado touchdowns were cited by the Storm Prediction Center (SPC) from Isaias, the strongest being an EF3 with up to 145 mph (235 kph) winds in Bertie County, North Carolina. This was the strongest tornado spawned by a tropical cyclone in the U.S. since 2005, Aon explained.

On the potential losses from hurricane Isaias, Aon explained, “It remains too preliminary to provide an economic or insured loss estimate at this time. The significant footprint of the event and incurred impacts, however, confirms that both the economic and insured totals will each individually surpass the USD1 billion threshold.”

That makes hurricane Isaias the most costly for the insurance and reinsurance industry of this year so far.

Impacts in the reinsurance market will likely be relatively low, with the majority of the losses from hurricane Isaias set to be retained in the primary insurance market, sources said.

“There is a possibility that a longer-than-normal period of loss development may initially occur,” Aon also warned, as the Covid-19 pandemic could exacerbate damage surveys and the claims process.