The 2020 Atlantic tropical storm and hurricane season is now forecast to have an 85% chance of “above-normal” levels of activity by NOAA, as the agency lifted its forecast for the season to call for an “extremely active” few months ahead.

NOAA joins other forecasters we track in calling for one of the most active Atlantic hurricane seasons on record in 2020.

Previously, back in May, NOAA had forecast that 13 to 19 named storms would form during the 2020 Atlantic storm season, with 6 to 10 becoming hurricanes and 3 to 6 major hurricanes.

Now, with already 9 named storms and 2 hurricanes behind us and the climatology looking extremely conducive to tropical storm formation, NOAA has ramped up its forecast significantly.

Taking the mid-point, that’s an increase of 7 more named tropical storms now expected for the season and 1 more hurricane. 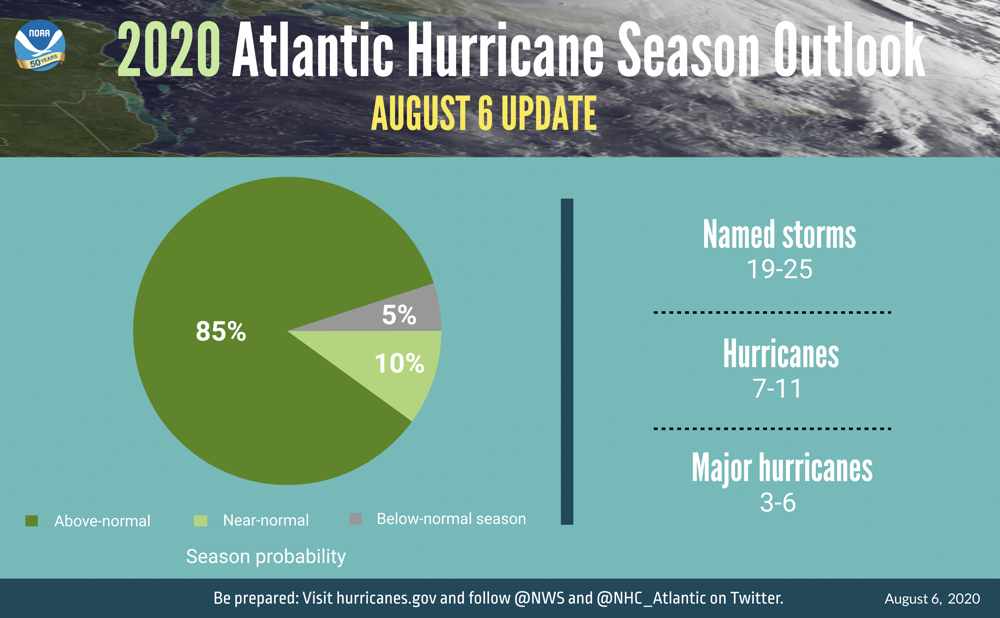 “This is one of the most active seasonal forecasts that NOAA has produced in its 22-year history of hurricane outlooks. NOAA will continue to provide the best possible science and service to communities across the Nation for the remainder of hurricane season to ensure public readiness and safety,” explained U.S. Secretary of Commerce Wilbur Ross. “We encourage all Americans to do their part by getting prepared, remaining vigilant, and being ready to take action when necessary.”

Based on a projection of accumulated cyclone energy (ACE), NOAA’s scientists now predict the chances of an above-normal Atlantic hurricane season has increased to 85%, with only a 10% chance of a near-normal season and a 5% chance of a below-normal season.

NOAA further explained, “Current oceanic and atmospheric conditions that make an “extremely active” hurricane season possible are warmer-than-average sea surface temperatures in the tropical Atlantic Ocean and Caribbean Sea, reduced vertical wind shear, weaker tropical Atlantic trade winds and an enhanced west African monsoon. These conditions are expected to continue for the next several months. A main climate factor behind these conditions is the ongoing warm phase of the Atlantic Multi-Decadal Oscillation, which reappeared in 1995 and has been favoring more active hurricane seasons since that time.

“Another contributing climate factor this year is the possibility of La Nina developing in the months ahead. Indicative of cooler-than-average sea surface temperatures in the equatorial regions of the eastern Pacific Ocean, La Nina can further weaken the wind shear over the Atlantic Basin, allowing storms to develop and intensify.”

Despite the increase in NOAA’s hurricane season forecast, our Artemis average remains 19 named storms, 9 hurricanes and 4 major hurricanes, which is still far-above the averages.