Analysts at investment bank Jefferies said this morning that they estimate the insurance and reinsurance industry loss from recent hurricane Ida will be around $32.2 billion, taking the 2021 catastrophe loss year-to-date run-rate far above the average.

August’s catastrophe events, including hurricane Ida which was the largest of the year so far, have now driven catastrophe claims far above the long-term average, Jefferies analysts believe.

Even excluding Hurricane Ida the analysts estimate that, “Year-to-date losses appear to be running 15% above the long-term average and 7% above the 10-year average.”

Excluding Ida the run-rate has dropped somewhat, but remains an above average catastrophe loss year.

The insurance and reinsurance industry is on-track for its most costly catastrophe year since 2017, the analysts state.

“By our calculation, natural catastrophe losses so far in 2021 are already higher than the full-year totals for the past three years (FY2018, FY2019 and FY2020),” they explained.

On hurricane Ida specifically, Jefferies analyst team estimate a roughly 40% economic to insured loss ratio, which they say drives their estimate for a bill of $32.2 billion.

This compares to the other estimates received so far, including, $25bn – $35bn (in Gulf region only), estimated by RMS, and $20bn – $30bn estimated by AIR Worldwide.

Including August’s losses the chart below shows that the year is now tipping towards one where flooding is now a major component of global insured losses, while the contribution from tropical cyclones has risen significantly with Ida. 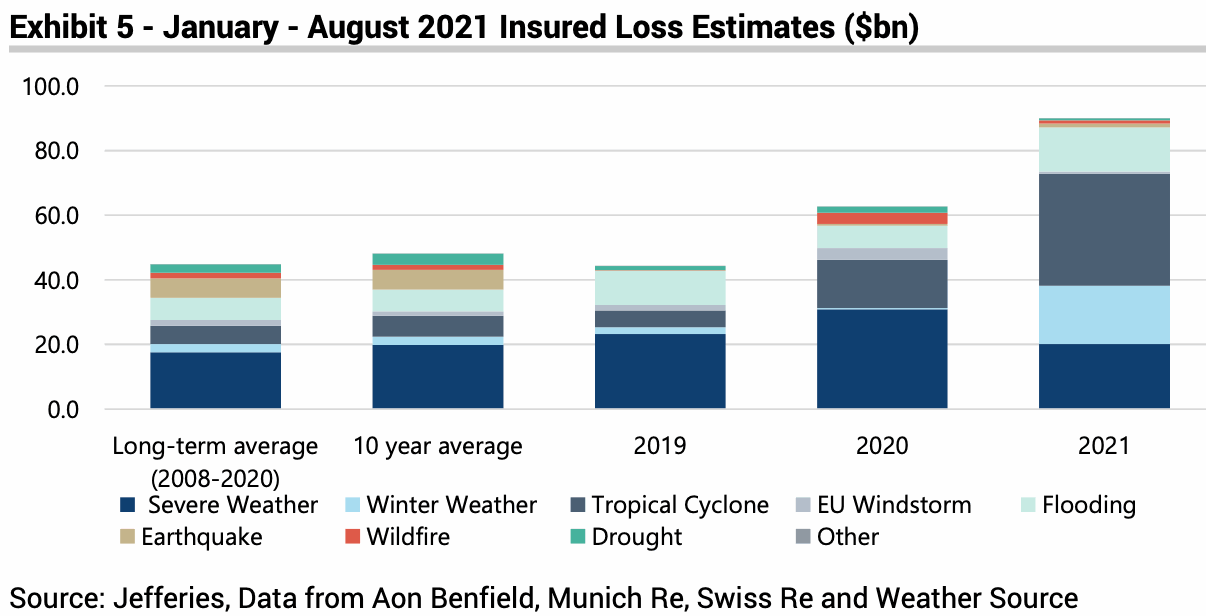 “Given the material losses from Hurricane Ida, we expect that reinsurance deductibles will be exceeded, with a higher proportion of net losses thus falling on reinsurers and creating additional rate rises in property excess of loss contracts.”

– AIR lifts top-end of hurricane Ida loss estimate to $30bn, to include floods.

– Ida will be one of the costliest U.S. mainland hurricanes: Aon.