The official start of the Atlantic hurricane season could be moved earlier by up to two weeks, if officials from National Oceanic and Atmospheric Administration (NOAA) decide that the recent historical climatology warrants an extension to the season.

Currently, the Atlantic hurricane season officially begins on June 1st and runs until the end of November.

But tropical storms are often designated and named in advance of the beginning of the season, something that is now being looked at to see whether it warrants an earlier season starting date.

NOAA representatives said that May 15th is the date being looked at, as a potential new starting date for the Atlantic hurricane season.

The earliest this would happen would be for the 2022 hurricane season, as we’re already too close to the 2021 season for the change to be made.

But NOAA and its National Hurricane Center (NHC) is going to be providing its regular tropical weather outlooks from May 15th this year, when previously they have started from June 1st.

A decision is likely to be taken at later this spring, at meetings held by the National Oceanic and Atmospheric Administration (NOAA) and also World Meteorological Organization (WMO), according to media sources including The Verge and Weather.com.

NHC spokesperson and meteorologist Dennis Feltgen told weather.com, “Considerations for the team would include a determination of the quantitative threshold for adding or removing dates from the official Atlantic hurricane season. Then, an examination would need to take place regarding the need for, and potential ramifications of, potentially moving the beginning of the hurricane season to May 15.”

There have been a number of early named tropical storms in the Atlantic basin, Caribbean and Gulf of Mexico in recent years.

Weather.com shared the graphic below: 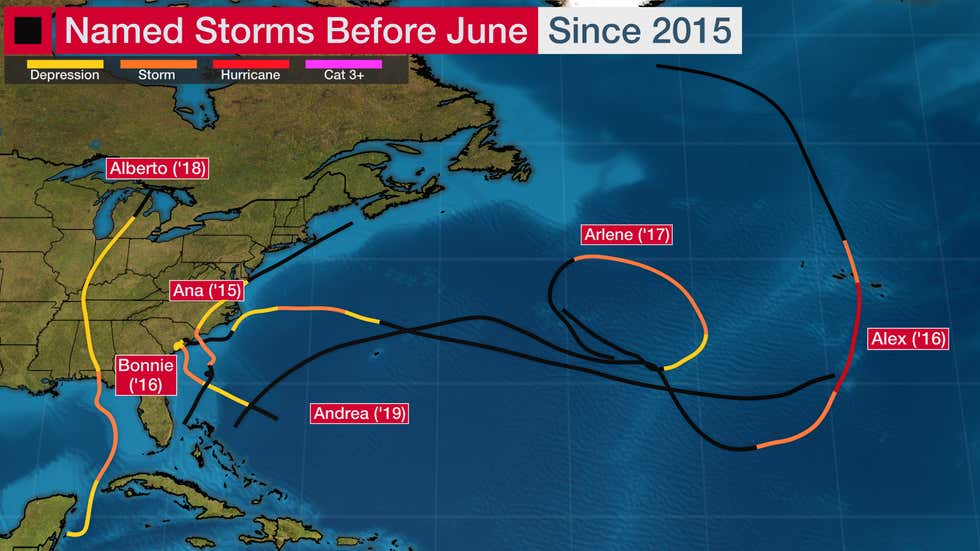 “Named storms have formed prior to the official start of the hurricane season in about half of the past 10-15 years, including each of the past six years,” Feltgen told weather.com. “Many of the May systems are short-lived, hybrid (subtropical) systems that are now being identified because of better monitoring and policy changes that now name subtropical storms.”

There are some considerations here for insurance, reinsurance and insurance-linked securities (ILS) interests, but they largely revolve around timing of potential protection buying, or wordings in specific products.

There are insurance, reinsurance and ILS products that are designed to cover the risk of US hurricane landfalls right throughout a season. So here the options would be to move the start-date earlier, or simply accept that this risk of an earlier storm forming has always been there anyway.

Hurricane risk models are generally calibrated to factor in the experience of recent seasons anyway, so it seems these should already be accounting for any risk posed by early forming storms.

The June 1st reinsurance renewals is an interesting date though, as these renewals are often considered largely Florida and named storm focused, in terms of the peak peril for which coverage is secured at June 1st.

Given the risk of any major hurricane landfall occurring earlier than June 1st is seen as incredibly small in the models, it’s unlikely any carriers would feel the need to buy protection earlier just because of an extension to the official hurricane season dates.

In fact, some carriers already buy and incept their mid-year reinsurance renewal purchases early anyway, largely as a way to avoid the congestion around this busy contract renewal period, but perhaps with an element of awareness that storms can come earlier than the season dates would suggest.

Of course, at the other end of the season, it is also possible to have tropical storm or hurricane activity into December, although this is seemingly rarer than pre-season storm formation.

In fact, the late season has been very quiet in recent years, perhaps suggesting that rather than any lengthening of the Atlantic hurricane season, what’s actually being seen is a slight shifting of the peak.

Seasonality is another interesting factor to consider then, as in the ILS market, for instruments such as catastrophe bonds and other US wind exposed ILS or collateralized reinsurance arrangements, seasonality can influence their contribution to modelled portfolio returns, with more risk/return apportioned at peak season.

Hurricane season also affects secondary market price marks for named storm exposed catastrophe bonds as well, so any shift in the timing of the peak of the season could influence when seasonality is applied on modelling ILS fund returns.

In reality, many of the early storms are sub-tropical in nature and historical early storms, pre-radar and other more advanced technologies, may actually have been wrongly categorised anyway.

But NOAA’s considering a change in the season start-date suggests that its meteorologists do believe the season is now more likely to have an earlier start, although as we said it’s entirely possible this is the whole season shifting a little earlier in the year, rather than the period of accepted named storm or hurricane exposure increasing in length.

As ever we’ll be tracking the 2021 hurricane season on our dedicated page. So stay tuned to Artemis as the season develops and early forecasts for 2021 Atlantic hurricane season activity begin to come in from later this month.