Economic losses from Japan earthquake up to $3.5 billion: RMS

The economic losses from property damage caused by both the April 15th magnitude 7.0 earthquake and April 14th M6.4 earthquakes in Kumamoto Prefecture, Kyushu, Japan are estimated to be up to $3.5 billion by RMS. 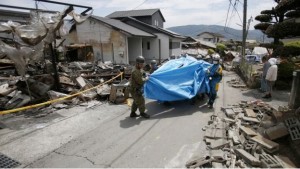 Whatever level the economic loss is estimated at, there is expected to be some reinsurance market impact from this Japan quake event, which could also mean small impacts to ILS funds or reinsurance sidecars.

RMS came up with the economic loss estimate after sending a reconnaissance team to the affected area. The estimate is based on findings from the visit, as well as risk modelling analyses of the shaking and its effects in different locations, with modelling carried out using RMS RiskLink version 15.0.

Chesley Williams, RMS senior geophysicist, commented; “There are hundreds of shallow crustal faults across the Japanese Islands. The events last week were likely associated with the Futagawa – Hinagu Fault System. The damage from these events is concentrated in Kumamoto Prefecture in close proximity to this fault system and was primarily due to strong ground shaking and slope failures.”

Interestingly, the loss from the 2011 Tohoku earthquake was only thought be around 15% covered by insurance in the end. So, on a percentage basis, this Kumamoto earthquake would need to see a significantly higher proportion of the economic losses estimated by RMS covered by insurance, in order for the toll to insurers and reinsurers to be as high as AIR’s estimate.

Of course differences in methodologies, as well as what is deemed in and out of both economic and insured loss estimates makes them very difficult to compare.