While reinsurance interests and holders of the Cal Phoenix catastrophe bond await the determination of whether PG&E’s equipment was the cause of the significant Camp wildfire of 2018, another utility’s power lines have now been deemed the cause of one of the largest 2017 blazes. 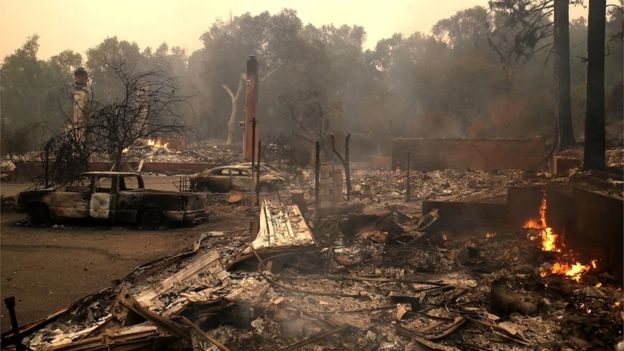 Southern California Edison is the electrical provider in question and its power lines are now said to have been the cause of the ignition of the Thomas wildfire.

The Thomas wildfire struck in October 2017, burning 281,893 acres across the Ventura and Santa Barbara counties of California and causing the destruction of 1,063 structures.

The end result for the insurance and reinsurance industry was a loss of around $1.8 billion from the Thomas wildfire, according to catastrophe industry loss event data aggregated by our sister publication Reinsurance News.

The Ventura County Fire Department said it has determined, “The Thomas Fire, which occurred in December 2017, was started by power lines coming into contact during high winds.”

High winds caused power lines to come into contact with each other, resulting in an electrical arc which subsequently is now thought to have caused the blaze.

The VCFD added, “The power line in question is owned by Southern California Edison.”

Edison and its parent had already been named in some lawsuits, including from insurers we understand, related to the ignition of the Thomas wildfire.

A full report is expected to be published by the fire department, which is likely to stimulate further legal action against the electrical utility.

Southern California Edison responded, saying that it believes there were at least two ignition points for the Thomas wildfire of 2017 and that two fires merged to become the single blaze.

The utility says that while it had already disclosed that its equipment may have been responsible for the ignition of the so-called Koenigstein ignition blaze, it has not determined whether its equipment caused the other ignition in the Anlauf Canyon area.

In addition, the utility said that it believes the ignition in the Anlauf Canyon area started at least 12 minutes before any issues involving its equipment and at least 15 minutes before the start time indicated by the VCFD report.

If deemed liable, Southern California Edison could find itself needing to pay a significant chunk of the insurance claims associated with the Thomas wildfire, something its property liability tower capacity providers and their reinsurance providers may find themselves on the hook for.

The utility had said previously that it believed it would exhaust its wildfire liability insurance if found liable for the Thomas wildfire. After which it purchased $300 million more capacity for the 2018 season.

The company had approximately $1 billion of wildfire-specific insurance coverage for the 2017 year wildfires, subject to a self-insured retention of $10 million per occurrence.

It looks like there could be a chance of the utility needing to claim on its coverage, which will not be welcomed by insurance and reinsurance interests on-risk for its liability tower.

The market awaits still understanding whether utility PG&E will be found liable for its equipment causing the 2018 Camp wildfire blaze, a much larger insurance and reinsurance market loss.

That is where the Cal Phoenix catastrophe bond exposure lies as well, hence some losses could flow to third-party investors if PG&E is deemed liable for the wildfire outbreak.

– PG&E and utilities not liable for starting Tubbs wildfire.