The U.S. National Oceanic and Atmospheric Administration’s Climate Prediction Center says there is a 30% chance that the 2019 Atlantic hurricane season sees above normal levels of activity and warns of factors including El Nino and a warmer than normal Atlantic that can affect intensity of the season. 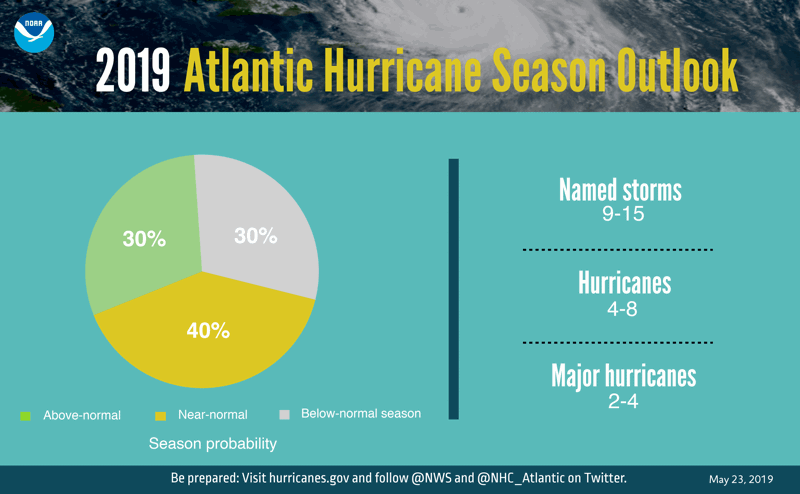 NOAA gives a 70% range of confidence for this forecast, which predicts slightly more hurricanes and major hurricanes than others of the main forecasters that we track here.

The ongoing El Nino conditions are expected to persist and suppress the intensity of the hurricane season, NOAA explains.

But, countering this, the administration also notes that an expected combination of warmer-than-average sea-surface temperatures in the tropical Atlantic Ocean and Caribbean Sea, as well as an enhanced west African monsoon, will both favor increased hurricane activity.

These factors make this hurricane season fraught with uncertainty for those concerned about the impacts of landfalls in the insurance, reinsurance and insurance-linked securities (ILS) market.

With conditions still looking to be ripe for intensification of storms, given the warm sea surface temperatures, any tropical storms that make it towards the U.S. coastline could become a concern for reinsurance related interests.

However, El Nino conditions can counter this, given the way it affects both steering currents and wind shear, which can impact where and how hurricanes track and also make their structure less stable as well.

NOAA also gave seasonal hurricane outlooks for the eastern and central Pacific basins, offering a 70% chance of an above-normal season for both regions.

Given the forecasts, reinsurance interests need to keep watch on the 2019 hurricane seasons as they develop, as it only takes a single landfalling storm for significant losses and impact to lives to occur.

Adding NOAA’s Atlantic forecast to the others we track maintains our Artemis average forecast for the 2019 hurricane season of 13 named tropical storms, 6 hurricanes and 2 major hurricanes.

As a reminder, one named tropical storm has now already been counted, after Andrea formed and then dissipated earlier this week.