The Insurance Council of Australia (ICA) has continued to count rising claims from the recent and in some parts ongoing extreme rainfall and flooding that has affected the Australian east coast region, with claims rising another 25% in the last day and an early estimate of $900 million being given for the insured cost so far.

The figure of $900 million is not based on reported insured losses from Australian P&C carriers, rather it is based on the number of claims seen but with the estimate based on previous flood events.

“This figure is subject to detailed assessment of claims as loss adjustors move in over the coming weeks and will increase as further claims are made,” the ICA explained.

As we reported yesterday, expectations are that the insurance and reinsurance market loss from the floods and rainfall will rise towards the $1 billion to $2 billion range.

Insurance claims from the flooding in South-East Queensland and the New South Wales coastal region are expected to trigger reinsurance layers and P&C carriers are already suggesting that recoveries will be made.

The ICA reports that insurers have now received 60,163 claims as of this morning, up 25% from yesterday’s toll.

The chart below shows the pace of claims, which is outstripping other recent flood insurance catastrophes in Australia. 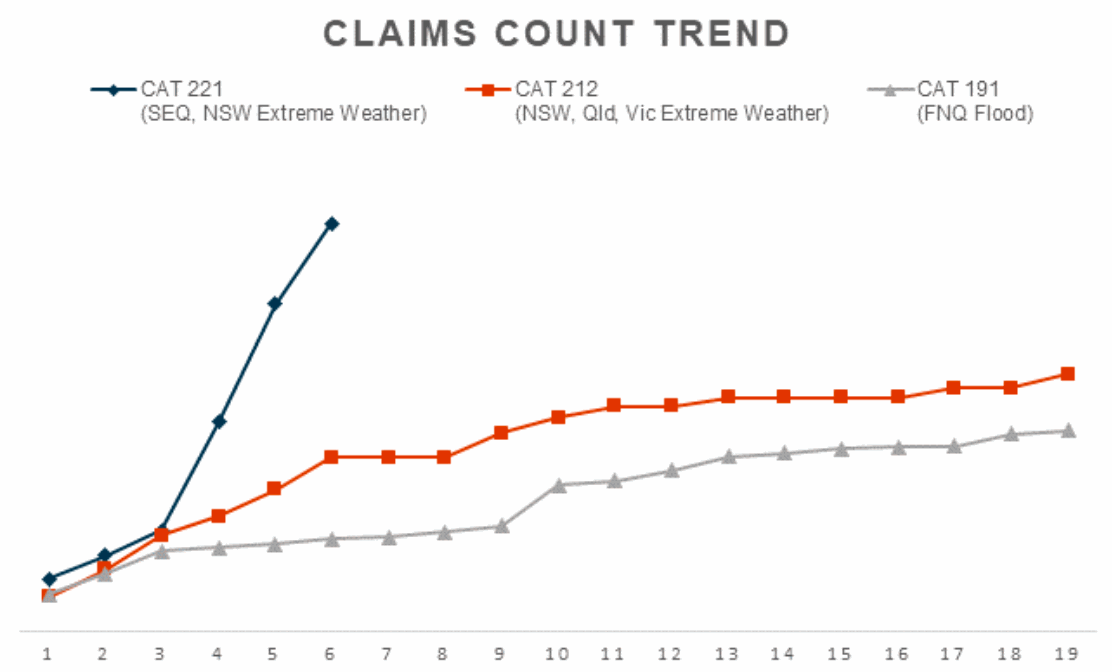 The chart compares the current flood disaster in Australia versus last March 2021 which was ultimately seen as around an A$751 million by PERILS AG, and another comparable catastrophe event in the far north Queensland area, which was a roughly A$1.2 billion insurance industry loss.

The ICA warns that the New South Wales claims figures are expected to increase in coming days, given the current flood emergency impacting in and around the city of Sydney.

They call the event “very much unfolding in and around Sydney” and for Brisbane there are now warnings of further storms which could exacerbate the situation.

Andrew Hall, CEO, Insurance Council of Australia said, “This is an ongoing and severe weather event, so it is still too early to predict where it will end.

“These severe weather systems have been impacting the East Coast now for more than a week and are still very active across all regions.

“Despite that, insurers are working closely with Local, State and Federal Governments to ensure that insurers are fully coordinated in the recovery process that is starting to commence in communities up and down the coast.”

As we explained earlier this week, reinsurance layers are expected to trigger as Australian flood claims quickly rise, with some insurers already highlighting their maximum retentions and others saying they expect to make recoveries.

Early assessments suggest that reinsurance will bear the brunt of the costs and that the toll could reach towards A$2 billion.