Australian flood loss seen up to A$2bn, with reinsurers on the hook

Global reinsurance markets are expected to bear the brunt of the Australian east coast flood losses, according to S&P Global Ratings, while claims reported have risen by another 53% overnight.

Australian property casualty insurers are expected to make extensive use of reinsurance arrangements to support their claims payments from the extreme rainfall and rising floodwaters that have impacted areas of the east coast of Australia in recent days.

The Insurance Council of Australia (ICA) now reports that insurers have received 48,220 claims from the flooding in South-East Queensland and the New South Wales coastal region.

That’s a 53% increase over yesterday’s report and claims have continued to rise far faster and already further than other comparable events, such as the floods from a year ago.

The March 2021 floods were ultimately seen as around an A$751 million by PERILS AG, who said the industry initially over-reserved for them, as the industry loss total fell from over A$1 billion.

The ICA has provided the graph below which shows that insurance claims from this years flooding have outstripped the 2021 event and increased at a much faster rate, suggesting there will be more to come as flood claims can be slower to file, needing residents to return to their properties to be able to lodge claims.

The chart compares the current flood disaster in Australia versus last March and another comparable catastrophe event in the far north Queensland area, which was a roughly A$1.2 billion insurance industry loss. 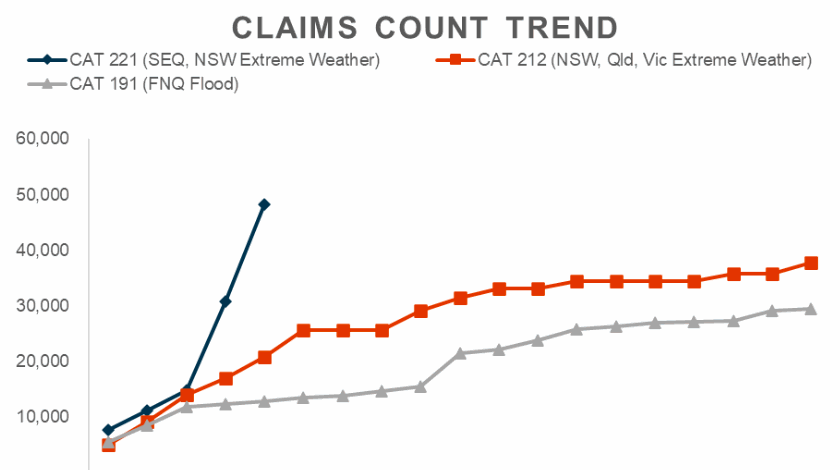 With claims set to rise much further, it’s beginning to look like the current flood catastrophe will be one of the most expensive to hit Australia.

As of this morning the ICA reported that 37,807 of the claims filed are from Queensland, with the remainder from New South Wales.

New South Wales figures in particular are expected to increase, as more policyholders return to their homes and businesses, the ICA explained.

84% of the claims relate to property damages, with the remainder motor vehicle and it’s still too early for an estimate from the insurers, the ICA said.

S&P Global Ratings has given a broad estimate of between A$1 billion and A$2 billion of insured losses for this flood event, which seems reasonable given the claims numbers and pace of claims filing being seen. That would equate to approaching US $1.5 billion.

S&P noted that the costs could approach the 2011 Brisbane flood event, which caused a normalised A$2.1 billion industry loss, but are unlikely to get close to the January 1974 A$3.2 billion Brisbane flood catastrophe.

“While gross exposure from the floods will be comfortably within reinsurance limits, insurers’ retentions will be moderate and eat into nominated catastrophe allowances and mute bottom line earnings,” the rating agency continued.

“Should the flooding extend in duration or further over state boundaries, or breach aggregate covers, this may entail further event retentions to be absorbed by the primary insurers. There will also be rising pressure on reinsurance rates at renewal,” S&P further said.

As we explained yesterday, reinsurance layers are expected to trigger as Australian flood claims quickly rise, with some insurers already highlighting their maximum retentions and others saying they expect to make recoveries.