Bermuda headquartered insurance and reinsurance firm Everest Re saw its third-quarter 2019 results dented by the impacts of catastrophe losses, but it continued to grow its capital base and its fully collateralized reinsurance sidecar and segregated accounts vehicle Mt. Logan Re stabilised further in the quarter.

Everest Re reported a 47% decrease in net earnings during the third quarter of 2019, primarily due to catastrophe losses stemming from Hurricane Dorian and Typhoon Faxai, as our sister publication Reinsurance News reported earlier today.

President and CEO of Everest Re Dominic J. Addesso commented on the results, “Everest generated an impressive 13% annualized net income return on equity for the 9 months year to date. Our business and balance sheet are built to provide meaningful protection for our clients, as was the case this quarter with the previously announced catastrophe losses from Hurricane Dorian and Typhoon Faxai. Everest’s mix of business between reinsurance and insurance, supported by robust investment income, results in a strategic balance that has contributed to our longevity and success over many years.”

Premiums written rose by 9%, driven largely by a 29% rise in direct insurance premiums, as Everest Re continues to diversify towards primary sources of risk. Reinsurance premiums were up just 3% by comparison.

$280 million of catastrophe losses in Q3 from hurricane Dorian and typhoon Faxai drove Everest Re to a technical underwriting loss though, as the combined ratio came out at 101.4% for the period.

Saving the quarter’s results though was the investment portfolio, as it delivered 12% and investment income was reported as a huge $181.1 million. Alongside some releases of reserves, the investment result has helped Everest Re maintain strong capital generation and growth in the quarter.

The result is that Everest Re reached $9 billion in common equity as of the end of Q3, a new high for the firm.

Alongside the capital provided by its use of the capital markets for reinsurance through the Kilimanjaro Re catastrophe bonds, as well as Mt. Logan Re Ltd., and its debt which hasn’t increased since 2014, Everest Re now benefits from a capital base of a record $13.451 billion, up from just under $13.4 billion at the end of the first-half of the year.

The Mt. Logan Re third-party capitalised collateralized reinsurance vehicle had been shrinking over recent quarters, as it continued to deal with the fall-out of the major loss years of 2017 and 2018.

But that shrinkage slowed significantly in the third-quarter of 2019, as Mt. Logan Re reached October 1st with $934 million of capital, only slightly down on the $940 million reported at the end of Q2.

That is an encouraging sign, as it shows that Mt. Logan Re continues to put the impacts of losses behind it and the erosion of its asset base has all but stopped in recent weeks.

Of course it will be interesting to see how much impact the third-quarter losses from hurricane Dorian and typhoon Faxai have on the vehicle, as well as typhoon Hagibis and any other events this year. It will also be interesting to see whether Mt. Logan Re elects to raise fresh capital for the January renewal season.

This slight churn in assets under management is also typical of that seen in the AuM’s of insurance-linked securities (ILS) fund managers and other third-party reinsurance capital vehicles during the period, as the hangover of prior year losses continues to be dealt with.

For Everest Re, third-party reinsurance and retrocessional capital provided by the Kilimanjaro Re catastrophe bonds and Mt. Logan Re’s AuM still makes up roughly 29% of Everest’s overall capital base, as seen below. 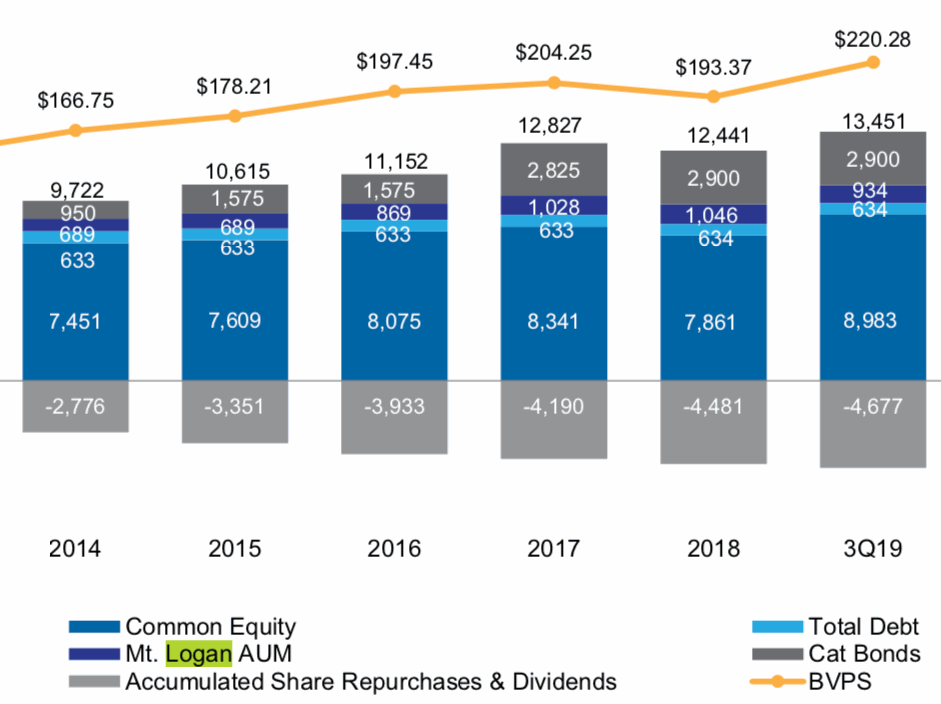 It is a decline from the 32% of capital that third-party sources contributed to Everest Re in cat bonds and Mt. Logan Re at the end of 2018, but still an impressive contribution from ILS investors.

As the losses move further behind Everest Re, the reinsurer should find it can begin to expand its Mt. Logan Re strategy once again and the slowdown in erosion of AuM signals this point approaching.

Everest Re could also look to the catastrophe bond markets later this year, as some of its older vintage Kilimanjaro Re cat bonds are due for maturity by December.

$1.125 billion of Kilimanjaro Re cat bonds are set for maturity before the year ends, suggesting the reinsurer is likely to look to replace this long-term capital, with fresh cat bonds possible.

Everest Re has not sponsored a cat bond since April 2018 now, suggesting it is well overdue a visit to the cat bond market and we may see the reinsurance firm return before the end of 2019 or very early in 2020.