Over the last few years third-party capital has become increasingly important for reinsurance firm Everest Re and after the recent years of losses its importance has risen even more, as catastrophe bonds and Mt. Logan Re now contribute 32% of the reinsurers capital base.

Everest Re, given its broad exposure to major catastrophe loss events, was hit hard in the fourth-quarter of 2018 by $875 million of pre-tax catastrophe losses, which was aligned with analysts expectations after the pre-tax total after the firm pre-warned of $695 million in losses after tax.

These figures are after taking into account reinsurance and retrocession, which includes the benefits of sharing some losses with the investors in Mt. Logan Re, but still Everest Re fell to a loss for the fourth-quarter on the burden.

For the full-year, Everest Re reported a profit though, reporting net income of $103.6 million, or $2.53 per diluted common share. Read more on Everest Re’s Q4 2018 results over at our sister publication Reinsurance News.

President and Chief Executive Officer, Dominic J. Addesso commented on the results, “During 2018 there were nearly $90 billion of insured industry losses, the fourth highest on record. Despite these events, Everest had both positive net income and operating income for the year. This result is testament to the diversification of our business across geographies, classes of business, and sources of capital. Everest’s long term returns remain impressive, with 5 and 10 year average returns on equity still in excess of 10%.”

“Sources of capital” is certainly one of the diversifying factors Everest Re has built on in recent years, as its capital base has grown significantly with the help of third-party investors backing its series of catastrophe bonds and the Mt. Logan Re fully collateralized reinsurance sidecar and segregated accounts vehicle.

After the two years of heavy losses in 2017 and 2018 Everest Re’s shareholder equity has actually shrunk slightly, but the amount of third-party capital available to its underwriting has grown (despite the losses) helping the firm to increase the contribution third-party capital makes to 32% of its capacity and capital base.

Mt. Logan Re actually shrank slightly during the fourth-quarter of 2018, having been reported as having $1.161 billion of assets under management at October 31st 2018.

As of January 1st 219 Mt. Logan Re’s assets under management fell slightly to $1.046 billion, slightly up from a year earlier.

The catastrophe bond protection provided by the Kilimanjaro Re series of cat bonds grew slightly during the year to reach $2.9 billion in aggregate.

Everest Re remains the largest cat bond sponsor in our Deal Directory and tops our catastrophe bond sponsor leaderboard as a result.

So in total, these third-party reinsurance capital activities amounted to $3.946 billion of capacity and capital for Everest Re at the start of 2019.

That means these third-party capital ventures now contribute the largest percentage of overall capacity in Everest Re’s history, with the capacity provided by cat bonds and Mt. Logan Re now making up 32% of Everest Re’s overall $12.484 billion of capacity.

Everest Re’s shareholder equity shrank during 2018, as the impacts of catastrophe losses drew down on this pool of capital for the re/insurer. However, it’s also worth noting the company delivered the most capital back to shareholders in its history as well, with $5.153 billion of share repurchases and dividends during the year as well.

Looking back, Everest Re began its third-party capital management and cat bond issuance activities back in late 2013 with the launch of Mt. Logan Re, then added the Kilimanjaro catastrophe bond series in 2014.

So almost a third of the firms capital and capacity is now delivered through the combined third-party capital deliver of the cat bonds and Mt. Logan Re, showing that Everest Re has moved in the direction of other reinsurers which choose to have a hybrid and diverse capital base.

This hybrid mix of capital and capacity sources helps insurance and reinsurance firms like Everest Re to attain greater scale and relevance, target lines of business where the returns may not support its cost-of-equity as well, and provide more holistic client solutions.

You can see the growth in third-party reinsurance capital use Everest Re in the chart below, which while dramatic has been aligned with growth in its overall shareholders equity as well.

Which may suggest that leveraging third-party capital to increase its scale and relevance has contributed to the growth in Everest Re’s equity as well? 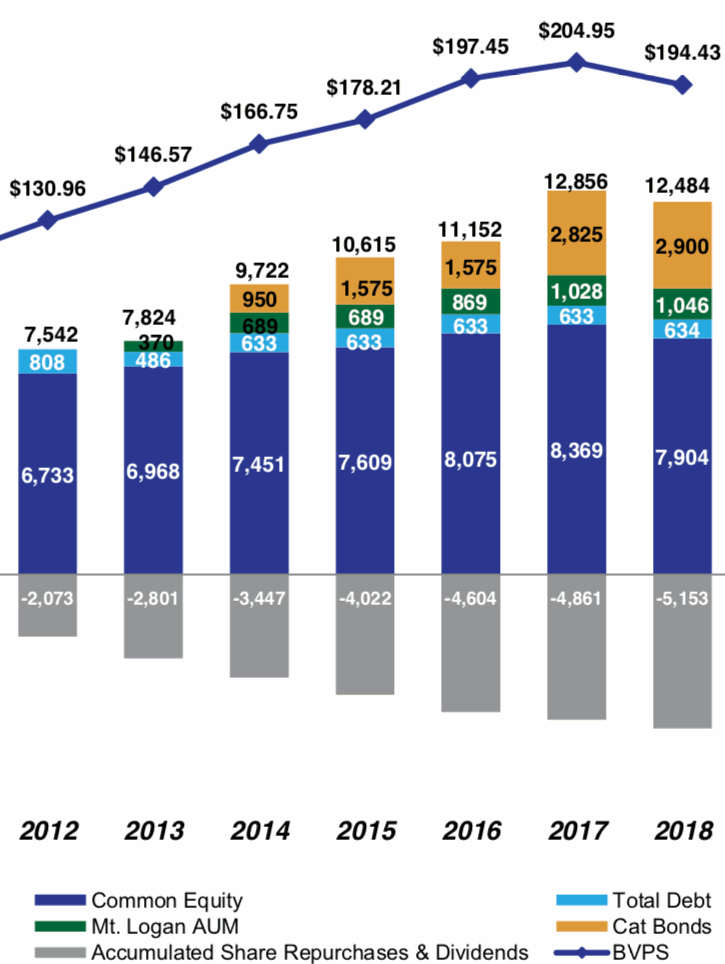