The 2011 Atlantic tropical storm and hurricane season doesn’t officially begin until the 1st June, but already meteorologists are closely watching an area north of the Leeward Islands where a wave has formed which they say has the potential to develop into a tropical disturbance.

Back in 2003, Tropical Storm Ana formed on the 20th April, showing that it is possible for tropical weather characteristics to form outside of the months that are generally accepted as the tropical storm season.

The area being watched is currently non-tropical and formed of an upper level pocket of cool air which is generating a lot of cloud and some thunderstorms. If the weather disturbance travels down to lower atmosphere levels and travels over warm water (that area is warm right now) it could become a tropical warm-core system. 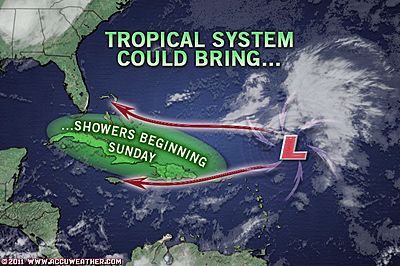 In reality, the chances of this becoming a storm that anyone needs to worry about are very slim at this time of year, in fact the National Hurricane Center gives it a 20% chance of further intensification. Meteorologists give it a good chance of dispersing, although there is the potential for some heavy rain over the Caribbean should it head in that direction.

Accuweather says in a news article on this disturbance, that early formation of a storm can’t be taken as a sign of an active hurricane season. They state that unusually warm waters in the Gulf of Mexico, as we have this year, are more likely to cause an active season. Interestingly they say that there is some correlation between years with large numbers of tornadoes and more landfalling tropical cyclones in the U.S.. As we wrote yesterday, 2011 is shaping up to be a record year for tornadic activity.

Whether this disturbance becomes a tropical depression or not this early activity in the Atlantic basin should be a reminder to all that hurricane season is getting closer (just 40 or so days away) and re/insurers need to ensure that their hedging strategy is in place.

As with previous years we’ll bring you coverage of major storms which threaten landfall on a special page which will document the season.