According to Bloomberg news, the Operational Re III Ltd. operational risk catastrophe bond is viewed by investors and holders as potentially at-risk on the challenges faced by the beneficiary of the coverage, investment bank Credit Suisse, due to the Archegos and Greensill Capital issues.

Operational Re III Ltd. then sold notes to capital market investors, including some specialist ILS investment funds, with the proceeds providing the collateralisation for the reinsurance agreement.

Bloomberg has reported today that the riskiest tranche of the Operational Re III catastrophe bond has been marked down and had traded at 60 cents on the dollar, as investors perceive an elevated risk of attachment and possible loss of principal.

This is all related to the Archegos and Greensill Capital issues that Credit Suisse has faced this year, both of which have cost the investment bank significant sums.

Credit Suisse lost around $5.5 billion due to the collapse of family office Archegos, which had borrowed huge sums from the bank.

This was followed by the Greensill Capital issue, which saw supply-chain finance funds managed by Credit Suisse facing large losses, some of which it had to repay.

Together, these issues have cost Credit Suisse billions and impacted its reputation, just the kind of incident an operational risk catastrophe bond may have been designed to cover.

However. Bloomberg noted today that understanding whether these issues are covered is challenging and as we’re not privy to the full documentation on the Operational Re III cat bond we are unable to provide much clarity at this time.

The Operational Re series of cat bonds provided Credit Suisse with operational risk cover for exposures including: certain cyber risk exposures, such as IT system failure that causes business interruption; fraudulent behaviour both of external parties and employees of the investment bank; fiduciary issues; losses due to improper business practices or unauthorised activity; accounting errors; documentation errors; regulatory compliance issues; HR issues; discrimination in the workplace; or even personal injury; among other things.

Fraudulent behaviour, losses due to improper business practices, errors. Some of these could apply in some way to Archegos and Greensill, perhaps.

But without clear sight of the language around the trigger for the Operational Re III catastrophe bond, it’s very hard to know if the underlying reinsurance capital is actually at-risk.

Bloomberg believes that the turmoil in pricing of the notes in the secondary market is driven by confusion to a degree, as investors are not sure whether there is exposure to the operational risk cat bond noteholders, or not, at this stage.

The notes of the riskiest tranche have been declined in value, while a “sliver” traded at 60 cents, Bloomberg explained today. 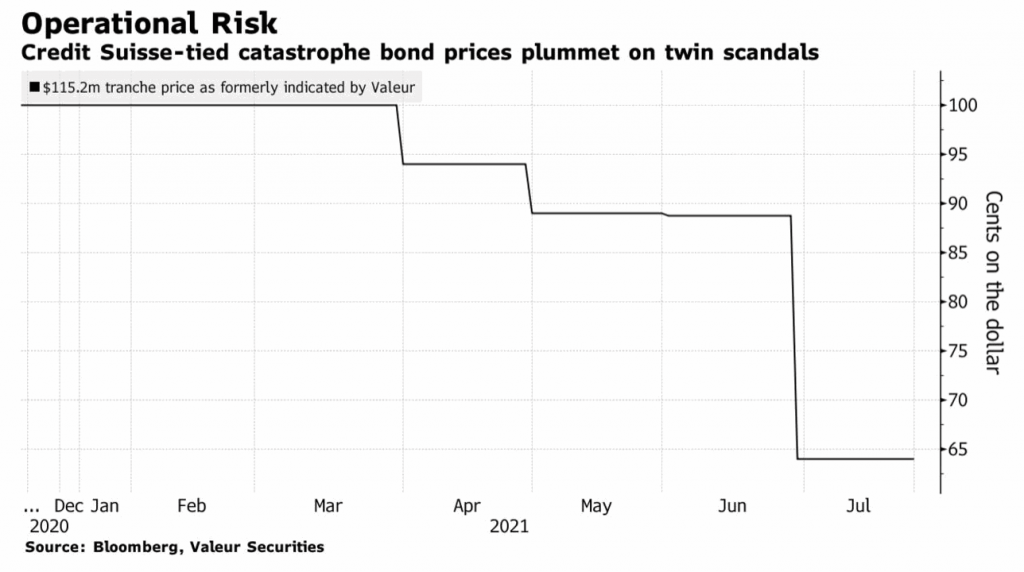 It is the Archegos and Greensill Capital issues that are seen as thee potential triggers for the insurance coverage, which could benefit Credit Suisse.

As with all three of the Operational Re cat bond deals issued so far, the one currently in-force and potentially at-risk features limits in place to ensure that no single operational risk loss event, or defined category of loss according to the transaction, can trigger the operational risk ILS notes on its own.

In this case Archegos and Greensill, if they qualify as covered events, would constitute two, it seems, so the aggregate nature of the insurance and reinsurance contracts could be activated.

At this stage it would come down to whether the insurance is triggered, under the Zurich issued policy and with all of these deals the Operational Re cat bonds are only providing some of the reinsurance capital to underpin that, we believe.

It’s likely they sit higher in the tower than traditional forms of insurance or reinsurance risk capital and if that is the case then traditional cover would need to attach and exhaust first before the Operational Re III noteholders faced any loss.

The most junior, or riskiest, $122 million tranche of Class D notes only had an expected loss of 0.12% at issue, as these were considered remote in terms of risk, but paid a 5.645% coupon as of the latest reset.

At this stage it’s impossible to predict whether the holders of these notes will face any loss and as are the typical mechanics of the secondary cat bond market, brokers have marked this junior tranche down to reflect the potential threat of losses, rather than any actual loss having occurred, as yet.

You can read all about the Operational Re III Ltd. deal in our comprehensive catastrophe bond and related ILS Deal Directory.