Collateralized reinsurance market shows no signs of slowing down

Collateralized reinsurance market growth shows no signs of slowing down, according to rating agency S&P, as the “exceptional growth” exhibited by this form of third-party capital looks set to continue, in particular thanks to the ease of uptake for ceding companies.

Collateralized reinsurance can be a much simpler entry point for ceding companies, into accessing the capital markets backed, insurance-linked securities (ILS) world of reinsurance and retrocessional protection.

For buyers of protection new to ILS, collateralized reinsurance poses fewer challenges or hurdles to adopt as a component of a reinsurance tower, compared to the structuring and issuance of catastrophe bonds, for example.

The comparability of the collateralized reinsurance product with traditional reinsurance is also a draw, as it slots more neatly into the tower of protection alongside the traditional participants in a program.

Typically indemnity in nature, the collateralized reinsurance product can often be seen as a simple alternative to a rated reinsurance balance-sheet, although now can of course be backed by a rated entity as well, removing the collateral one step further from the ceding company

This simplicity has also made it attractive to ILS fund managers, as they can deploy their capital into reinsurance programs with much greater ease and on more level terms with competitors.

All of this has helped to drive the rapid growth of that segment of the ILS market, resulting in collateralized reinsurance being as much as twice the size of the catastrophe bond market at this time (depending on whose metrics you use, an example from Aon is below). 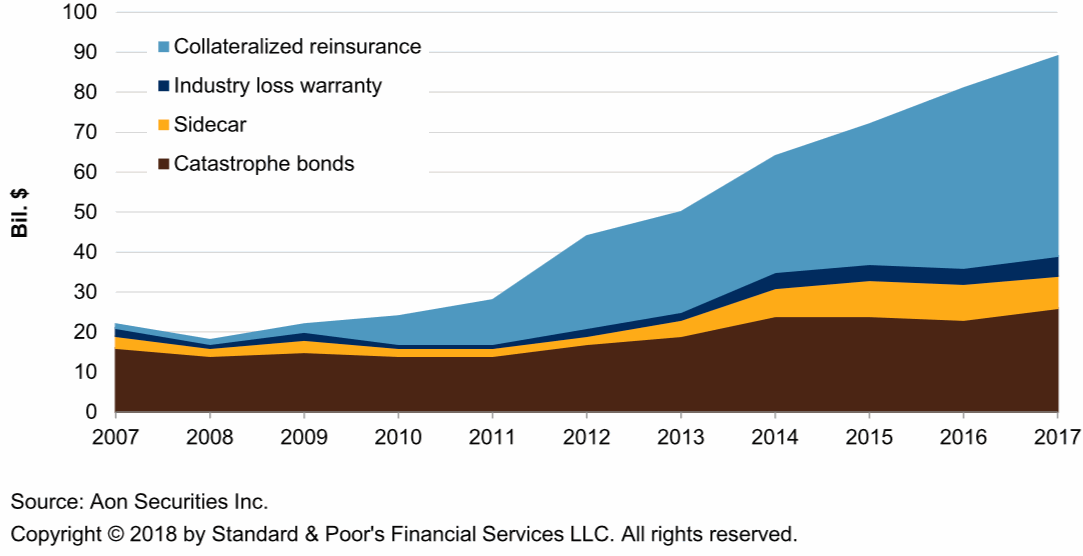 S&P notes that ILS funds “do not typically offer an independent assessment of their ability to pay claims” but the full cash collateralization of the risk is increasingly seen to negate the need for ratings, with acceptance of this option increasing across the global insurance and reinsurance marketplace.

In total, the figures from Aon in the chart above show that collateralized reinsurance is roughly 60% of total convergence or ILS capital, accounting for around $50 billion in 2017 and by now likely closer to $60 billion (we would estimate).

S&P note that not every counterparty wants to directly face off to a collateralized reinsurance arrangement and trust, which has led leading ILS funds to work more closely with fronting reinsurers or to establish their own rated reinsurance entities.

The latter, of ILS fund managers establishing their own rated vehicles, “Puts further pressure on traditional reinsurers’ competitive position, especially given that the vehicles usually have a lower expense ratio than the traditional players as the latter provide various ancillary services to their clients,” S&P explained.

It is also likely to continue to outpace catastrophe bond market growth, at least until the costs of cat bond issuance can be lessened further.

Collateralized reinsurance is also likely to assist with the expansion of the ILS market as well, given its simpler to transact nature means that entering new classes of business will likely be easier in future for ILS funds adopting this approach.

“We assume collateralized reinsurance will remain the dominant means of incorporating third-party capital into the reinsurance market, despite being the source of a significant proportion of the 2017 investment losses,” S&P said, adding “It is an effective means of connecting cedants’ counterparty credit risk considerations with the investors’ appetite for insurance risks.”

However, it’s worth noting that growth of collateralized reinsurance has slowed somewhat in 2018, after two year’s of extraordinary growth in 2016 and 2017.

This is a natural slow down as the sector achieved scale and now further growth is expected at the rate seen so far this year, but for growth to accelerate again we’ll need to see the ILS market expanding and taking more market share (as our survey results forecast may happen).