The recent fire at a floating dock in the shipyard of luxury super yacht manufacturer Lürssen has been designated as a loss event to track by Property Claim Services (PCS) through its PCS Global Marine & Energy product. 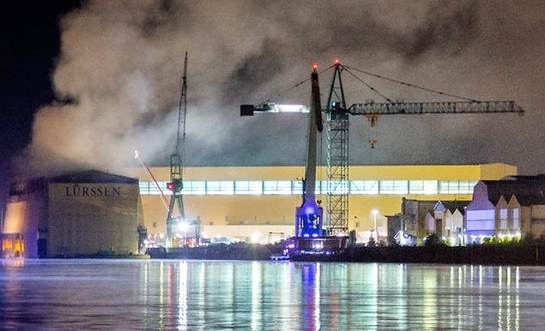 The fire is expected to result in a significant loss for the marine hull insurance market, perhaps significant enough to see reinsurance layers kicking in, hence there is a chance that this man-made loss could also result in a small hit to the insurance-linked securities (ILS) fund market.

Other man-made losses in recent years have hit a few ILS funds and collateralised providers of retrocessional reinsurance, including the Costa Concordia and Tianjin fire losses.

As the ILS fund market expands its remit into specialty lines of business including some elements of marine risks, while some collateralised retrocessionaires provide broad-based cover to reinsurers including for marine loss events, significant and catastrophic losses in short-tailed specialty lines (such as marine hull) become more likely to result in attritional impacts for some funds.

PCS has designated the shipyard fire as an official PCS Global Marine & Energy event, meaning that it will analyse the loss event, track the development of claims, aggregate claims information from insurers and report on the event, if the market-wide loss is significant enough.

It’s been reported by TradeWinds that the insurance and reinsurance market could face as much as a $700 million marine hull claim as a result of the Lürssen shipyard fire.

It’s not clear whether there is also a property policy exposed to the fire as well, which along with a potential business interruption claim could raise the eventual market-wide loss.

Given the way the Costa Concordia, Tianjin and Jubilee oil field FPSO losses reverberated around the reinsurance and retrocession markets, including some small or attritional impacts to ILS funds and collateralized retrocession, there is every chance that if the Lürssen shipyard fire loss escalates it could do similar.