NOAA has updated the concept of an ‘average’ Atlantic hurricane season, shifting the 30-year period forwards by a decade, which now means the benchmark average year contains two more named tropical storms and one more hurricane than before.

It means the definition of an ‘average’ hurricane season is now based on the most recent 30-years of climatological history.

Previously, the average (also termed the median by some), was based on records from 1981 to 2010.

Using those years gave an average hurricane season in the Atlantic 12 named tropical storms, 6 hurricanes and 3 major hurricanes of Category 3 strength or greater.

As from the start of the forecasts for the 2021 Atlantic hurricane season, NOAA said that its Climate Prediction Center (CPC) will use 1991 to 2020 as the new 30-year period of record.

The updated averages for the Atlantic hurricane season have therefore increased, with 14 named storms, 7 hurricanes, but still 3 major hurricanes.

NOAA said that this once a decade update moves the set of statistics used to determine when hurricane seasons are above-, near-, or below-average relative to the climate record. 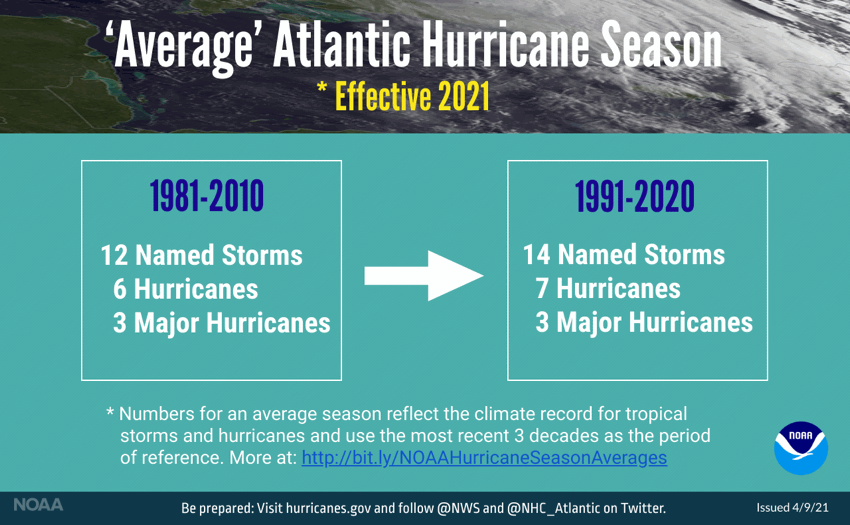 “This update allows our meteorologists to make forecasts for the hurricane season with the most relevant climate statistics taken into consideration,” explained Michael Farrar, director of NOAA’s National Centers for Environmental Prediction.

“Our work illustrates the value of NOAA’s investments in next-generation technologies to capture the data that underpins our outlooks and other forecast products. These products are essential to providing the public and local emergency managers with advance information to prepare for storms, and achieving NOAA’s mission of protecting life and property.”

However, looking at more recent history, the average for 2011 to 2020 is for 17 named storms, 7 hurricanes and 3 major hurricanes.

Commenting on the reasons why numbers have risen, NOAA said, “The increase in the averages may be attributed to the overall improvement in observing platforms, including NOAA’s fleet of next-generation environmental satellites and continued hurricane reconnaissance. It may also be due to the warming ocean and atmosphere which are influenced by climate change. The update also reflects a very busy period over the last 30 years, which includes many years of a positive Atlantic Multi-decadal Oscillation, which can increase Atlantic hurricane activity.”

“These updated averages better reflect our collective experience of the past 10 years, which included some very active hurricane seasons,” Matt Rosencrans, seasonal hurricane forecaster at NOAA’s Climate Prediction Center further explained. “NOAA scientists have evaluated the impacts of climate change on tropical cyclones and determined that it can influence storm intensity. Further research is needed to better understand and attribute the impacts of anthropogenic forcings and natural variability on tropical storm activity.”

As we’ve explained in recent days, early forecasts for the 2021 Atlantic hurricane season are all pointing towards another above-average year.

This remains the case, even lifting the average benchmark to the new 30-year period NOAA will use, as our Artemis average is 18 named storm, 9 hurricanes and 4 major hurricanes, with ACE of 148 based on the forecasts we’ve tracked so far.

We’ve added the new average to our table where we collect seasonal forecast data and compare it to actual storm numbers, but for reference we’ve left in the earlier 30-year average for comparison as well.

Averages are a useful benchmark, when considering how forecasts compare with recent or historical seasons. But for the insurance and reinsurance industry just a single hurricane landfall can result in above average losses, meaning these figures are directionally useful, but certainly not guidance for what to anticipate in terms of how impactful a hurricane season may become.