U.S. specialty insurance group Assurant has shrunk down the top of its reinsurance tower at its July 2020 renewal, securing less coverage than a year ago to reflect changes to its exposure and reduced writings.

Assurant’s 2020 property catastrophe reinsurance tower provides for U.S. coverage of $930 million and Florida specific coverage of $1.15 billion, both of which figures are down considerably on the $1.16 billion U.S. tower and $1.4 billion tower with the inclusion of Florida from a year ago.

Assurant said that its 2020 reinsurance tower will cost it approximately $138 million pre-tax in premiums, down from the $163 million pre-tax it paid for its 2019 tower, which reflects the insurers exit from small commercial underwriting business as well as a modest reduction in its lender-placed exposure.

The reinsurance renewal has been placed with more than 40 reinsurance carriers all rated A- or better by AM Best, some of which are likely to be fronted capacity from ILS funds or collateralised sources.

When adding Assurant’s coverage from the Florida Hurricane Catastrophe Fund, the insurer has a reinsurance tower covering gross Florida state losses of up to $1.15 billion. 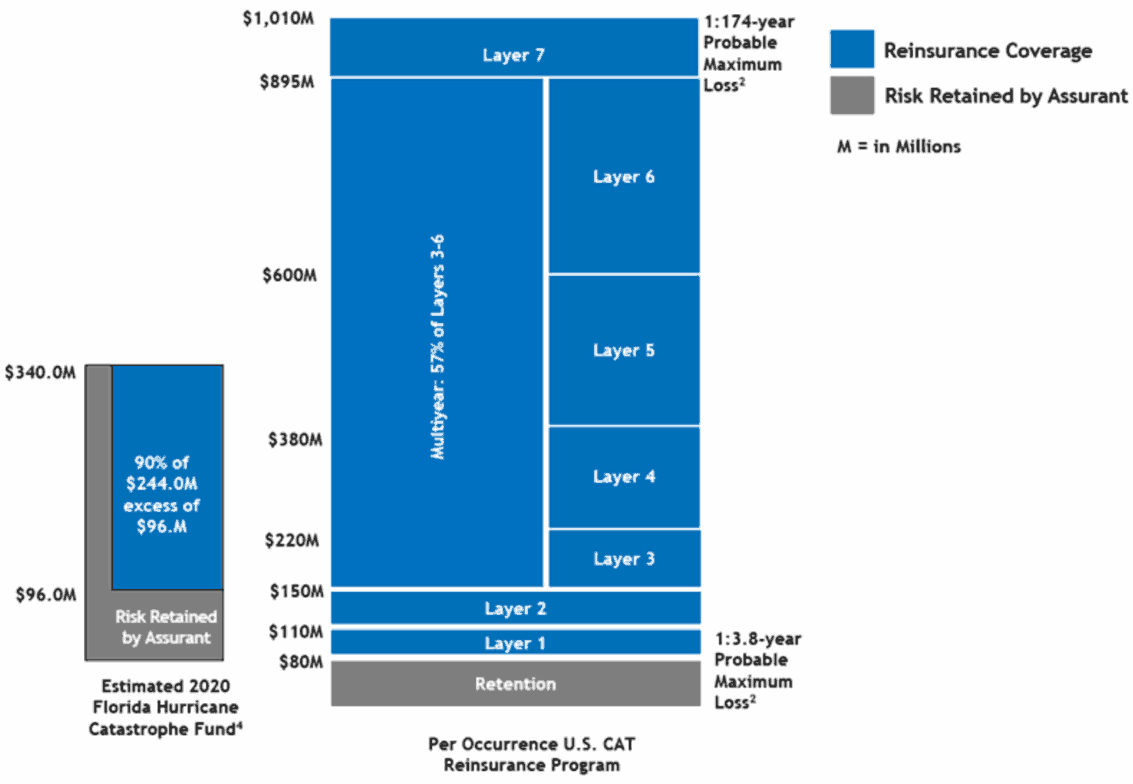 Assurant has continued to expand its use of multiyear reinsurance contracts, having increased this to 35% of the program in 2019 and with the U.S. tower now almost half placed on a multi-year basis over the next two to five years, which the insurer noted will help to lower the volatility of future reinsurance renewal pricing.

Every layer of the reinsurance tower offers Assurant one automatic reinstatement, except Layer 1 which has two reinstatements.

Assurant has managed to hold onto its cascading reinsurance coverage, so that aggregate protection across multiple events remains and the majority of higher coverage layers (layers 2 through 6) would cascade down to $110 million as the lower layers and reinstatement limits are exhausted by any losses.

It’s hard to compare Assurant’s reinsurance costs, but these are likely to have risen somewhat given the state of the market right now.

However the insurer has secured a tower that covers it to a one-year higher return period event than a year ago, with the same retention as well as reinstatement arrangements, still keeping its cascading features and locking in more multi-year protection, which suggests the carrier has been looked on favourably by reinsurance markets as a partner.