U.S. specialty insurance group Assurant has successfully secured a larger amount of reinsurance limit for its property catastrophe reinsurance program for 2019, while at the same time the retention on the program now stands at one-third of where it was as recently as 2012.

Assurant has been steadily expanding its reinsurance protection through adjustments to its property catastrophe tower in recent years, culminating in 2019 with Florida coverage of $1.4 billion, U.S. wide protection of $1.16 billion, with multi-year coverage an increasing component of the placement and the retention reduced by 30% compared to the prior year.

“We are pleased to complete our 2019 catastrophe reinsurance program, which this year includes a significant reduction of our per-event retention to $80 million, as we look to lower our catastrophe exposure and produce more predictable earnings and cash flow,” Assurant President and Chief Executive Officer Alan Colberg commented.

Assurant’s property catastrophe reinsurance program retention sat as high as $240 million back in 2012, but has steadily been reduced, falling to $120 million in 2018 and now coming down to just $80 million for the 2019 wind season.

After suffering losses from the U.S. hurricanes in 2017, Assurant has increased its spread of coverage somewhat again, while the reduced retention means limit secured has actually increased, even though the top of the program tower is still similar.

The catastrophe reinsurance program protects, “more than 3 million homeowners and renters policyholders against severe weather and other hazards,” Assurant explained.

The $1.16 billion U.S. program is enough coverage for a 1-in-173- year storm, based on projected modeled loss estimates, the company said.

The coverage increases to $1.4 billion in Florida when the catastrophe fund is also taken into account. 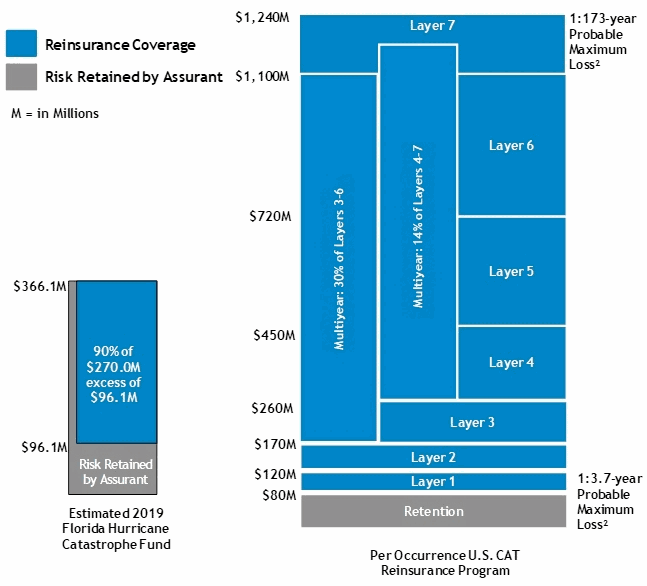 Sensibly, multi-year contracts now make up roughly 35% of the catastrophe reinsurance program layers, Assurant said, up from 32% in 2018.

Every layer features one automatic reinstatement, except for the first which has two reinstatements, Assurant continued to explain. While every layer also includes a cascading feature to provide multi-event cover.

This means the higher coverage layers can drop down to $120 million as the lower layers and reinstatement limit are eroded.

Assurant has paid a $165 million pre-tax reinsurance premium for the program, which it says reflects a significant decrease in catastrophe per-event retention and modest growth in exposure as well.

This is up from the estimated $134 million of reinsurance premiums paid in 2018. However, the increased protection and reduction in retention will have raised the overall expenditure for Assurant.

For 2019, the coverage was placed with more than 45 reinsurers that are all rated A- or better by A.M. Best. We’re told there are some ILS fund backed rated carriers involved, as well as fronted ILS capacity.

“At Assurant, we manage risk to protect and support our policyholders when catastrophes occur. Going forward, we will continue to evaluate options to further reduce our catastrophe exposure,” Colberg said.