Welcome to our 2016 Artemis Flood & Protection Gap Roundtable in partnership with Swiss Re, in which participants explore the issues surrounding global flood insurance coverage, the resulting protection gap and how traditional and capital markets can assist to narrow this. 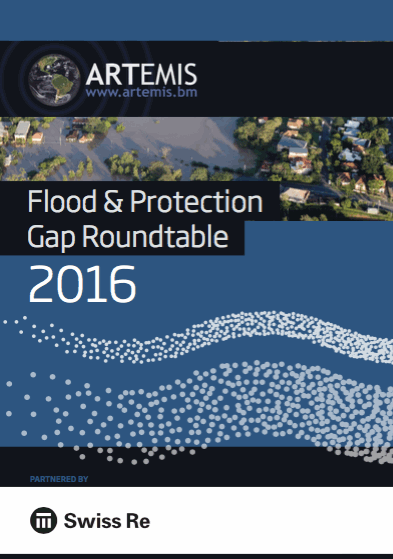 Flood is a rapidly evolving and increasingly costly peril, responsible for the highest economic losses globally in 2015. While insurance penetration varies significantly from country to country, flood events are also resulting in significant insurance losses, particularly as assets at risk of flood continue to grow along the coast and in major cities that are close to sea level. Factors arising from climate change, such as sea level rise and more extreme precipitation events, are also expected to contribute to more extreme flood events in the future.

Yet in comparison to perils such as earthquake and windstorm, flood remains significantly underinsured. Widespread flooding along China’s Yangtze River Basin has caused estimated economic damage of around $33 billion, according to Aon Benfield. Of this total, just two percent is thought to be insured.

But it is not just in emerging markets where there is a significant “protection gap.” Mature insurance markets such as Canada, Germany, Italy and the Netherlands are among those where flood risk is significantly under-insured. As Swiss Re’s Caspar Honegger points out in this roundtable discussion, Australia could point the way forward as a country that has made significant strides in closing its flood insurance gap since the Brisbane floods of 2010.

The appetite of governments to act as insurer-of-last-resort for flood risks appears to be dwindling in some markets, with most supporting a move towards more private market involvement.

In the UK, this issue was resolved through the Flood Re initiative, with the government and industry working together to create a solution that ensures a viable market for flood will continue to exist while allowing insurers to price the hazard appropriately.

As other markets explore the possibility of similar mechanisms, it is clear the role of the reinsurers and capital markets will continue to grow, with governments and the insurance industry working together to better monitor, mitigate and transfer the risk of flood.

Executives and representatives of the insurance, reinsurance and ILS market came together with Artemis to discuss issues surrounding flood insurance and the resulting protection gap.