The growth of ILS capacity backed by capital market investors in the global reinsurance market is “pressuring the reinsurance sector to work to charge less” according to A.M. Best, pressure that is not decreasing with alternative and ILS capital now contributing 20% of the markets capacity

According to data from rating agency A.M. Best, alternative or convergence capital from insurance-linked securities (ILS) structures and vehicles, such as catastrophe bonds, ILS funds, reinsurance sidecars and other structured products, has grown to $71 billion at the middle of 2016 and now represents roughly 20% of total dedicated sector capacity.

The growth of ILS-backed capacity and its increasingly efficient business model is now pressuring the traditional reinsurance sector to embrace innovation, in order to lower its own cost-of-capital ultimately to the benefit of the customer by reducing the cost of cost of re/insurance products.

A.M. Best Vice President Robert DeRose explained; “Capital market capacity is clearly pressuring the reinsurance sector to work to charge less. With more capital in the market, the ultimate winner should be the insured client as this drives down the cost of insurance.”

All of these factors are seen as negative and are continuing to adversely impact global reinsurance firms, the rating agency explains, resulting in a scenario where operating fundamentals remain very weak, alongside reduced demand from primary insurers, as they retain more risk to leverage their own excess capacity, which also continues to exacerbate the situation.

As a result of all of these headwinds and this build-up of pressure, innovation is being forced on the reinsurance sector, as they seek to develop new strategies as a response designed to help them “adapt to structural market changes”, according to A.M. Best.

The influence of capital market capacity is far from solely negative though, in fact it’s a positive for the reinsurers that are prepared to embrace and leverage it.

A.M. Best notes that as reinsurers seek to position themselves to navigate the market challenges, increasingly they “seem to be viewing capital market capacity as an opportunity as opposed to a threat.”

While capital market capacity continues to flow into the global reinsurance market, albeit at a slower rate of adding just $3 billion in the first-half of 2016 to grow to $71 billion, “underwriters that have the market knowledge and distribution capability to assess risk are benefiting,” A.M. Best says. 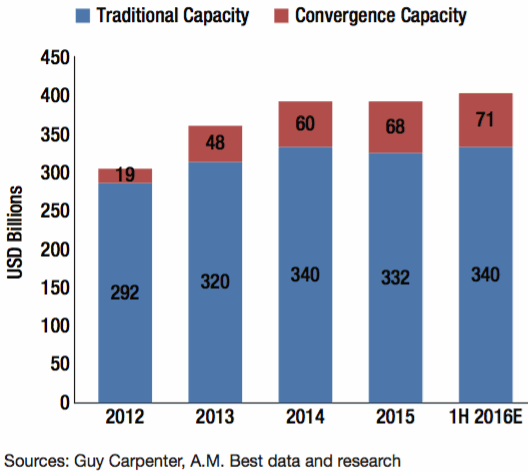 The growth of alternative capital and the ILS industry is now providing reinsurers with opportunities to be innovative and to reduce their own costs of capital, as the addition of an efficient third-party capital balance-sheet or use of other third-party capital backed structures can help them to better navigate the changing marketplace.

A. M. Best explains; “This abundance of capital is good for buyers of reinsurance in negotiating pricing and terms and conditions, or in some cases purchasing more reinsurance protection, as reinsurers try to maintain their market position while maintaining underwriting discipline.”

Capital market capacity is also being leveraged to help reinsurers optimise their own business strategies and capital needs. It’s a positive influence on their businesses in challenging time, if strategically well-managed.

“Reinsurers are responding to these challenges by employing greater capital market capacity to
help optimize results and reduce net probable maximum loss (PML) for peak zones as a percentage of capital,” the rating agency continued.

Reinsurers are of course also utilising capital market capacity alongside their own capacity, in the structural form of collateralised reinsurance sidecars or reinsurer managed ILS funds, as well as simply laying off risk to ILS investors.

By managing the capital in-house reinsurers also stand to benefit from fee income, as well as the alternative capital backed balance-sheet which can help them to remain more relevant in some property catastrophe markets in particular.

As we’ve discussed before though, these efforts do have to be strictly managed with fair and robust alignment between reinsurer and investor interests, as at some point there will be questions raised if losses hit third-party investors, but not the reinsurer itself, which had not been anticipated.

“While there will be winners and losers among the players and investors, with more capital in the (re)insurance market, the ultimate winner should be the insured client as this drives down the cost of insurance, keeping with the theme of working harder to charge less. Through that lens, this all seems positive,” A.M. Best comments.

However while the market is adapting to this new structural reality and the growing pressure applied by ILS and alternative capacity from the capital markets, the shake-out is set to continue as while seeking to be innovative companies will continue to face growing competitive pressures.

Reinsurers are also innovating by shifting geographies, entering new lines of business, using cycle management to move into primary lines, embracing technology and the insurtech trend and seeking out new partnerships or acquisitions.

The rate of change is not slowing and we expect to see many more initiatives emerge in the months to come, either focused on increasing efficiency, acquiring new business, building new expertise, seeking organic or acquisitive growth.

ILS and capital market capacity promises to help make the reinsurance market more efficient, but in doing so change is required and is being forced on reinsurers. Under such conditions there is no doubt that mistakes and poor decisions will be made.

“It is the long-term value proposition that really matters for all parties involved and that outcome is still very unclear,” Robert DeRose said.

Finally, it’s important to note that reinsurers have also pressured themselves into innovating, through their own habit of lowering rates and discounting significantly for diversification. There are some markets where ILS is not a big player and still rates have tumbled and the pressure is ramping up, which has particularly affected small to mid-sized reinsurers.

Laying the blame for the pressure reinsurers are facing solely at the feet of the ILS market is overly simplistic, of course. Alternative capital has certainly been a catalyst for change and will continue to be one, but the competitive nature of a marketplace like reinsurance has ensured that this pressure has been magnified significantly.

With around 20% of global limit for catastrophe risk now being ceded to the capital markets via ILS structures, funds and players, the pressure is not going to let up anytime soon.

Innovation is a healthy response and this evolution of the reinsurance business model, while producing losers, will in the end produce a leaner, more customer focused, lower-priced risk transfer market, ultimately benefiting everyone.

A.M. Best is holding its outlook for the reinsurance sector as negative, saying that “The significant ongoing market challenges that will hinder the potential for positive rating actions over time and may eventually translate into negative rating pressures.”

Growth in longevity reinsurance and longevity risk transfer business could help life reinsurers to elevate their returns on equity (ROE)...