Global property catastrophe reinsurance rates rose just 1.1 % across the market at the key January renewals, but there considerable variation in pricing across region and how loss affected or perceived as under priced an account was, according to Guy Carpenter.

The reinsurance broker said that its Global Rate on Line (RoL) Index, which measures the change in catastrophe premium dollars paid year-on-year, rose by only 1.1%, despite the consecutive years of major losses suffered by the reinsurance market. 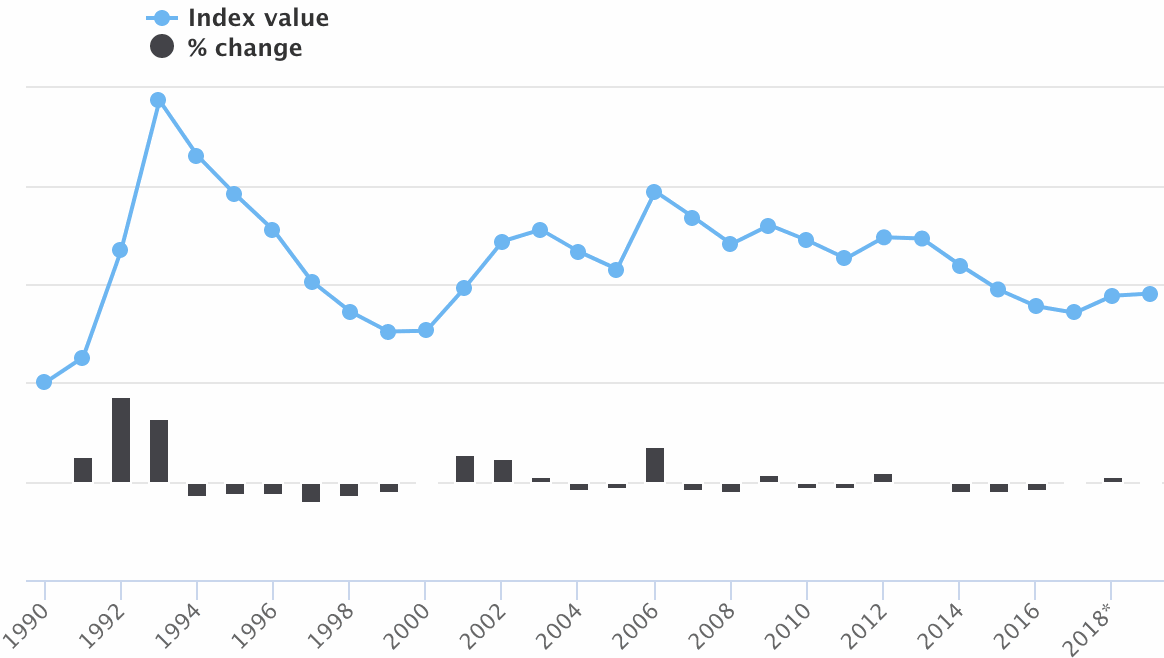 However the difference in rate movements for different regions was stark, with a 5.1% gulf between positive United States catastrophe reinsurance renewals and negative European contract signings.

The U.S. saw rates increase by 2.6%, according to Guy Carpenter, while the Europe, Middle East and Africa (EMEA) regions saw rates decline by -2.5%.

But within those regions there was also a wide variation in renewal results, depending on account specifics and loss experience.

Plentiful capacity remained, despite the impact of heavy losses on the sector and the capacity crunch that emerged in retro reinsurance markets, meaning buyers largely got what they wanted, or expected, at the renewal.

Some specific dynamics also affected the market, such as Brexit’s impact on European renewals where some buyers were. more reluctant to use capital from Lloyd’s, although this had little effect on the outcome of the renewals as additional capital was readily available.

Of course the renewal of major European reinsurance programs has been a difficult affair dominated by the big four players for years now, resulting in a marketplace that is unattractive for many, particularly on the ILS side of the market where discounting rates for diversification just isn’t a viable strategy for most.

These big reinsurers write European renewals at rock-bottom pricing, undercutting almost all others, resulting in the continuing softening in that market and this has pulled down rates across the globe, as evidenced by the broker indices, such as Guy Carpenters.

“While the impact on January 1 renewals overall was muted, this was a more challenging environment for some segments than it was a year ago. The industry is dealing with questions of pricing adequacy and where and to what degree adjustments might be needed. Finding equilibrium was not always easy and questions remain coming out of this renewal,” commented David Priebe, Vice Chairman at Guy Carpenter.

Upward movement in property reinsurance pricing was limited to localised activity, the broker said, but added that the effects on profitability from losses in this sector spilled over to put pressure on other lines of business to achieve or maintain self-sustaining levels.

Because of this, increases on some non-loss-impacted casualty and specialty business were achieved, although we’d venture that the profitability of these business lines and the impact of the performance review at Lloyd’s will also have had a bearing on rates here.

Guy Carpenter sees the outlook for the reinsurance renewals through 2019 as uncertain, given how much uncertainty there is over the amount of capital that could flow into the market and whether the issues around trapped collateral will persist for ILS markets.

“Diminishing profitability as well as uncertainty over the amount of available convergence capital impacted retrocessional renewals at January 1, but it is unclear what this might mean for broader market dynamics going forward,” the broker said.

Noting that if the trapping of collateral continues, or increases, and capital providers become more conservative in their allocations to reinsurance, it could have a larger bearing on how April and mid-year renewals shake-out.

However, the broker also notes that there are “signs capital may increase, with several initiatives reportedly in progress to bring in new funds,” which as we’ve explained may result in rising ILS and collateralised reinsurance capacity by the mid-year renewal juncture.

Guy Carpenter explained that while the reinsurance industry continues to adjust its mechanisms for delivering capital to be matched with risks, those risks themselves continue to evolve as well, which the broker says creates additional challenges.

Here, the firm is referring to the influence of climate change on catastrophe and severe weather risks, as well as emerging classes of risk such as cyber.

To respond to this Guy Carpenter says, “Market participants may need to adapt their approach to a shifting landscape,” but the broker adds that it expects reinsurance capacity will remain plentiful “for risks that can be adequately measured and priced.”

It will be interesting to see whether questions get raised about the sustainability of underwriting European property cat risks at rock-bottom pricing in the future, as this is a dynamic which many believe is fostering an unhealthy expectation on pricing in the region.