The recent outbreak of deadly tornadoes and damaging severe convective storms in the United States has been estimated as a roughly $3 billion insurance industry loss, by risk modeller Karen Clark & Company.

KCC is, as ever, the first out of the gates with a modelled estimate of insurance and reinsurance market losses from a catastrophe event.

At “around $3 billion” the estimate sits towards the lower-half of the expected range, which could be encouraging for some insurance, reinsurance and ILS market participants.

KCC’s loss estimate covers the insured loss from the December 9th to the 12th severe convective storm outbreak, which includes the Quad-State Tornado and damaging winds and hail, the company said.

The around $3 billion estimate is based on the output of the firms high-resolution KCC SCS Reference Model.

The graphic below on the meteorological set-up that drove the severe weather event is from KCC. 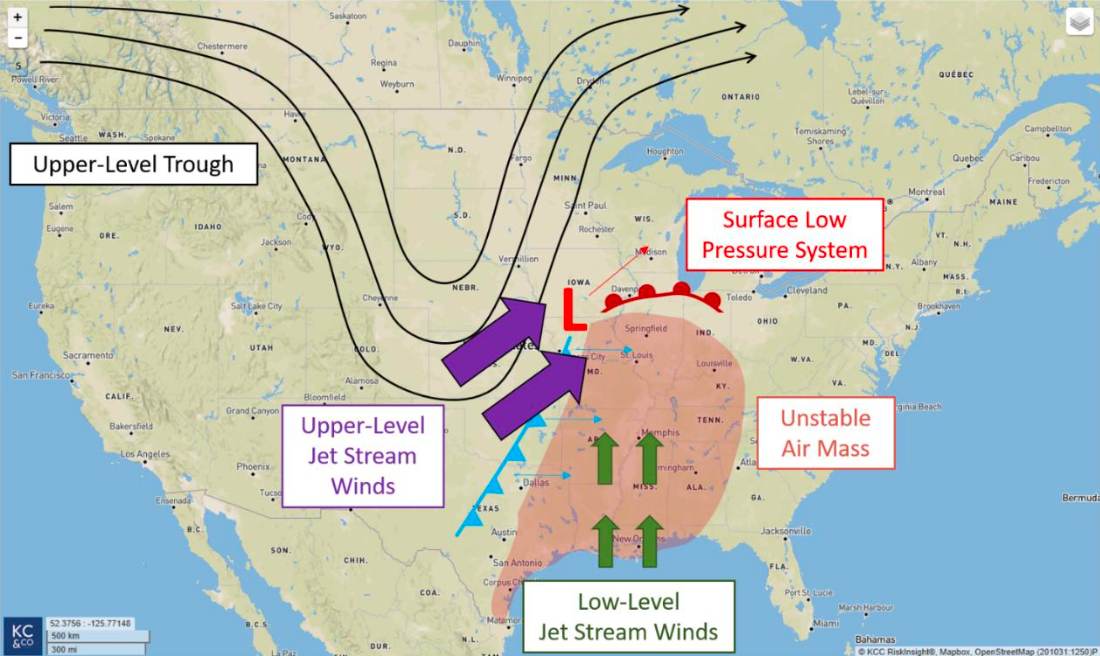 KCC explained some of the damaging impacts from the tornadoes:

The most significant damage has been reported in Kentucky. Hundreds of homes and businesses were destroyed in Warren County, which includes Bowling Green, where many structures including the TMS Automotive plant were leveled.

Widespread significant damage was also reported elsewhere in Kentucky, including in Mayfield, where a tornado tore through a candle factory and leveled the downtown sector. Dozens of homes were destroyed in Dawson Springs and in Princeton, where a country club was also destroyed. In Barnsley, numerous buildings reduced to their slabs were reported. Thousands of customers were still without power in Kentucky as of Monday morning.

Most of the damage was driven by the so-called Quad State tornado, which tracked across four states for at least 200 miles, KCC noted.

It is early to be estimating losses for this recent severe weather and tornado event, but KCC’s number seems a reasonable place to start, with a $3 billion industry toll already well within the top-ten severe convective storm industry losses ever experienced and not far off a top-five event.

– US tornado toll likened to $7bn industry loss from 2020 Derecho.

– Tornadoes a multi-billion loss, a “limited portion” for reinsurance: Aon.