Insurance industry losses from natural catastrophe events are preliminarily estimated to reach $105 billion in 2021, according to global reinsurance firm Swiss Re.

That’s the fourth highest industry natural catastrophe loss toll on record, the reinsurer said, and it expects the nat cat toll will grow faster than GDP in future.

Overall, the reinsurance company said that insured catastrophe losses and man-made disasters will cost the industry around $112 billion in 2021.

But natural catastrophe insured losses at $105 billion are far above the $77 billion 10-year average and 17% above the $90 billion experienced in 2020. 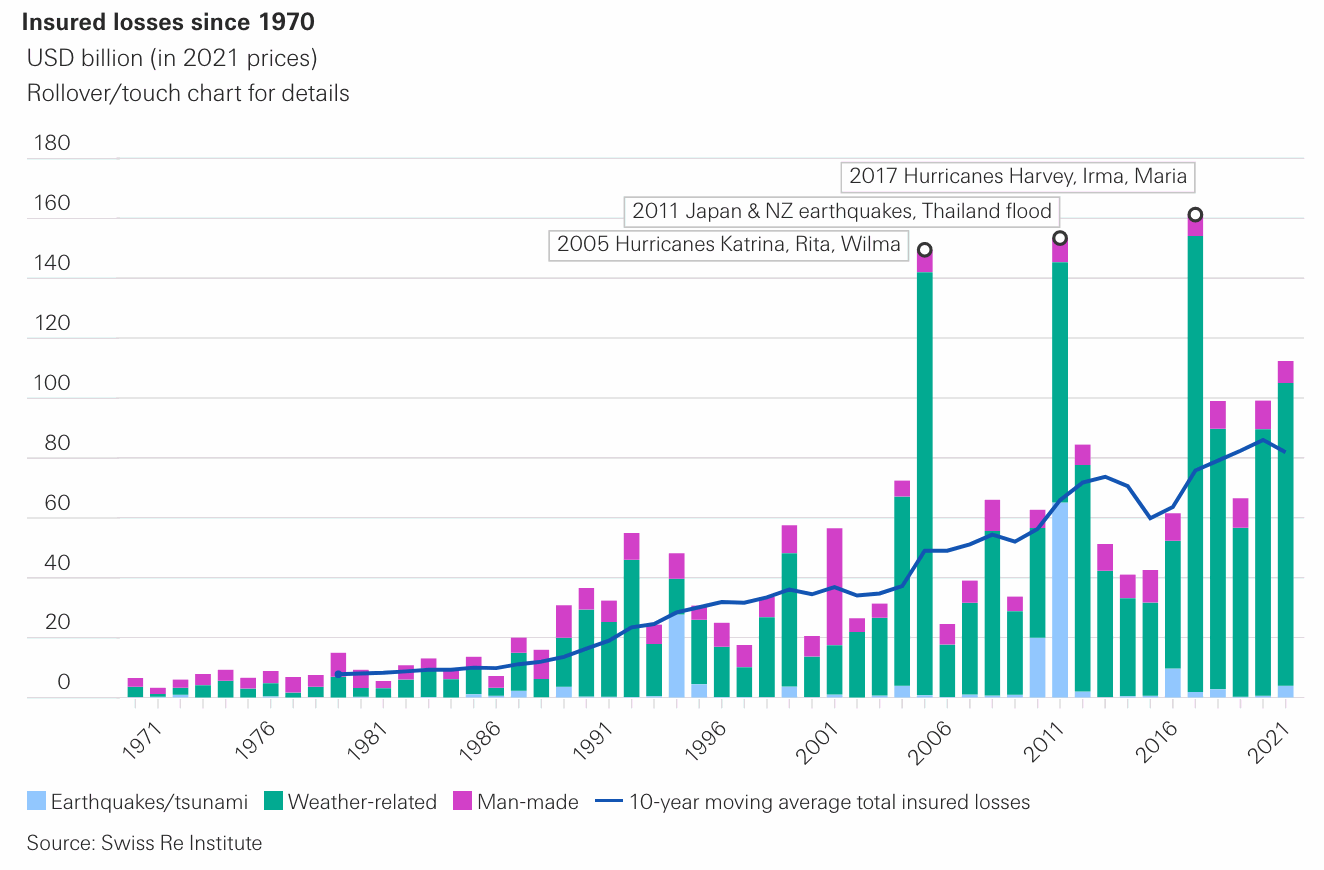 ”In 2021, insured losses from natural disasters again exceeded the previous ten-year average, continuing the trend of an annual 5–6% rise in losses seen in recent decades. It seems to have become the norm that at least one secondary peril event such as a severe flooding, winter storm or wildfire, each year results in losses of more than USD 10 billion. At the same time, Hurricane Ida is a stark reminder of the threat and loss potential of peak perils. Just one such event hitting densely populated areas can strongly impact the annual losses,” explained Martin Bertogg, Head of Cat Perils at Swiss Re.

Hurricane Ida was the largest loss event of the year, in Swiss Re’s eyes, but the reinsurance firm only pegs its estimate for Ida at between $30 billion and $32 billion, including the flooding in New York and NFIP losses.

This is actually a lower-end estimate for hurricane Ida, considering some have pegged it as high as $40 billion and the damage excluding flood is already seen at the upper twenty billions of dollars by many in the industry.

Swiss Re also pegs winter storm Uri at $15 billion and the European flooding in July at $13 billion, which is perhaps the highest estimate for those floods.

However, economic losses from the European floods are seen as $40 billion, which lays bare the protection gap that exists for flood coverage in the region.

Secondary perils once again contributed a significant amount to the annual toll, Swiss Re highlights, especially from severe thunderstorms, hail, tornadoes and flooding around the world.

In fact, more than half the annual nat cat loss total is from secondary perils once again, on which Swiss Re notes that “wealth accumulation and climate change effects in disaster-prone areas drive claims.”

It’s worth noting that Swiss Re hasn’t been clear on what, if any, loading it has applied to the annual total for 2021 to cover the recent tornadoes in the United States, but did say that “catastrophe activity in December has remained elevated and resulting losses are still being assessed.”

So, it’s safe to assume there’s a strong chance the annual total will rise once the impacts of the tornadoes is better understood, while there is also loss creep potential in events like hurricane Ida as well.