Up to $850 million insured loss from M7.8 Ecuador earthquake: AIR

Catastrophe risk modelling firm AIR Worldwide has provided the first insurance, and possibly reinsurance industry loss estimate from the Magnitude 7.8 earthquake that impacted Ecuador recently, of up to $850 million. 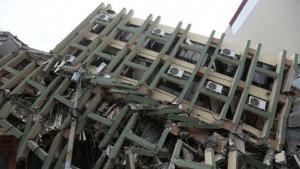 On the 16th of April 2016 a M7.8 earthquake struck Ecuador’s central coast, with the country continuing to assess the amount of casualties and widespread damage caused by the event.

“According to the USGS, the megathrust earthquake occurred as the result of shallow thrust faulting on or near the plate boundary between the Nazca and Pacific plates,” said AIR Worldwide senior engineer, Dr. Arash Nasseri.

AIR Worldwide has estimated that the earthquake, which has so far claimed 570 lives and injured more than 4,600 people, will result in an insurance and possibly reinsurance industry loss of between $325 million and $850 million.

The quake resulted in more than 1,100 buildings reportedly being destroyed with over 800 damaged, underlining the potential for losses to reach the $850 million mark, and even beyond.

Beyond destroying/damaging buildings and the devastating number of lives lost and injuries that occurred during the quake, “a lack of running water, power, and communication systems, as well as damage to highways, bridges, and the closure of Manta Airport,” were other resulting impacts of the event, says AIR Worldwide.

Following the quake the country entered into a “State of Exception,” and Ecuador’s President, Rafael Correa, declared a state of emergency for six of the worst hit regions in the country, which includes Esmeraldas, Los Ríos, Manabí, Santa Elena, Guayas, and Santo Domingo.

The catastrophe modelling firm explains that its loss estimates explicitly capture data from ground shaking, and that its insured loss estimate for the event is based on assumptions surrounding earthquake insurance penetration rates in the country, “about which there is considerable uncertainty.”

AIR Worldwide has provided more detail on what its insured loss estimates do and do not reflect, as shown below.

Artemis reported recently that industry reports and commentary, plus initial loss estimates of recent earthquakes in Japan, and the Ecuador event would likely impact the earnings of reinsurers in the second-quarter.

AIR Worldwide has estimated that insured losses from the recent Japan quake would be as much as $2.9 billion, so combined with the potential $850 million of losses from the Ecuador quake it’s certainly possible that some reinsurers will feel the impact and there is the potential for any ILS funds participating on reinsurance programs covering Ecuador on a collateralised basis to face some attritional loss too.