Insurance claims from the severe flooding that struck the New South Wales region of Australia this month have risen again over the weekend, with another 25% added to take the total to 10,526, but the estimate for insurance and reinsurance market losses remains low at $122 million.

Flood waters continued to recede in the Sydney area and the sun came out over the weekend, providing much-needed respite to flood affected residents.

Now, the impacts further north have also stopped and some towns that have been flooded for days are now seeing roads passable again.

While the forecast is for more rainfall over the next week or so, at this time there aren’t any concerns over flood waters rising as rain totals are expected to be lower. Although there are warnings that surface flooding is possible given how saturate the ground is now.

Given the slow pace of claims being filed, compared to the floods earlier this year in Australia, we’ll likely drop down to reporting on these floods just once or twice per-week after this article, unless anything of note occurs or the number of claims filed jumps unexpectedly.

As of Thursday morning, the number of insurance claims has risen further to 6,853 as of early this morning, a 57% increase.

The figure jumped again to 8,415 last Friday, while an initial insured loss estimate of $97.9 million was reported by the ICA.

The Insurance Council now puts the number of claims filed at  10,526, another 25% increase to Friday’s figure.

But losses are also rising slowly, with the Monday update from the ICA reporting its initial estimate of insured losses as now just $122 million.

Claims from this latest July 2022 flood event in Australia are still tracking well-below other recent flood catastrophe events that have affected the country (see chart below), which is encouraging for insurance and reinsurance interests that have been badly hit by losses from the country in recent years. 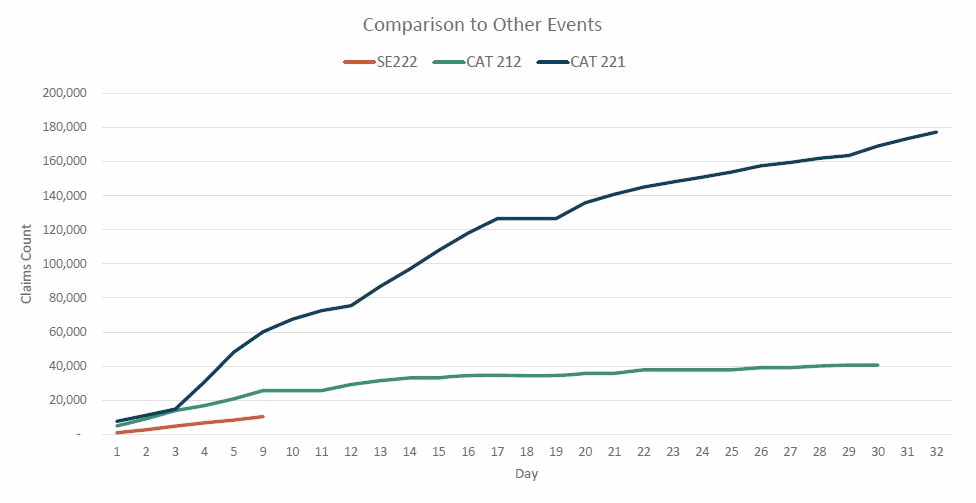 The July 2022 flooding in Australia remains a “significant event” rather than an insurance catastrophe.

The longer-term outlook remains focused on the potential for more rainfall and potential flooding over the coming months, as Australia’s Bureau of Meteorology latest update forecasts a wetter August to October to be expected for much of Australia, with the east particularly exposed.

Rainfall is likely to be above median, the BOM said, with an 80% chance much of the Northern Territory, Queensland and New South Wales experienced above average rainfall over those coming months.

“Large parts of northern, central, and eastern mainland Australia (away from the southern coastline) are around 2 to 3.5 times more likely than average to have unusually high (in the top 20% wettest of all years over 1981–2018) rainfall for August to October,” the BOM said.

2022 has now seen some eastern parts of the country flooding three or four times, with this latest episode set to add to the misery of residents and business owners.

These July 2022 floods in Australia have struck just as parts of the eastern and southeast coastal areas of the country are in recovery after a number of flood events that occurred earlier in the year.