Australian primary insurance giant Suncorp said this morning that it has made adjustments to its reinsurance tower at the July renewals, as the company dealt with the “material hardening” of rates.

Suncorp’s goal was to achieve a “balance between the cost of the program and acceptable levels of earnings and capital volatility” through its reinsurance renewal, a task made much harder by higher reinsurance prices.

“While the overall structure of the program remains similar to prior years, changes have been made to reflect the material hardening of the global reinsurance market following elevated natural hazard activity in recent years,” the insurer explained this morning.

The insurer has successfully kept its maximum event retention at $250 million for the coming year, while also increasing the upper limit of the reinsurance tower coverage from $6.5 billion to $6.8 billion.

The aggregate XoL cover has remained at $400 million, but with this higher attachment, at the same time the per event deductible has increased from $5 million to $10 million.

You can see Suncorp’s renewed reinsurance arrangements below: 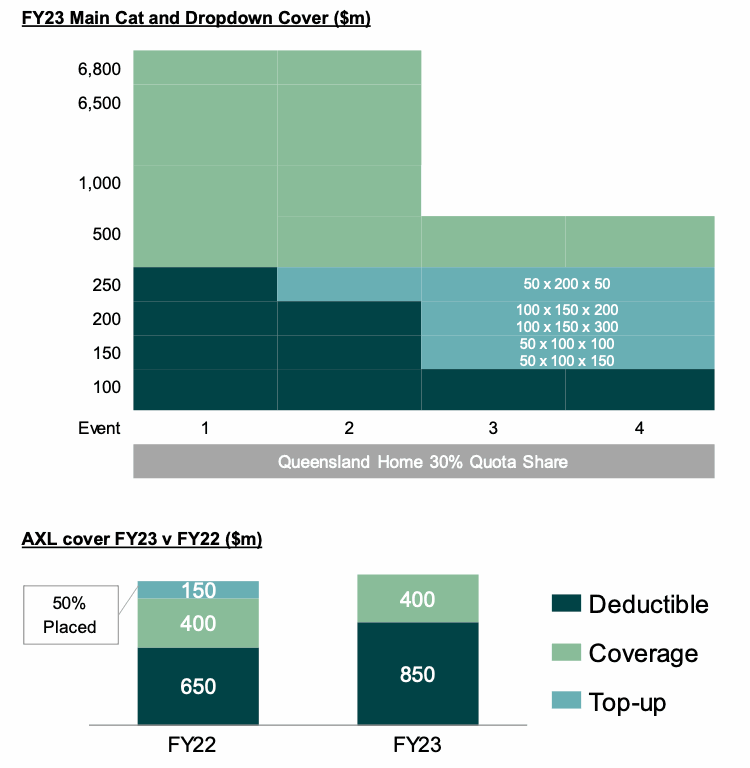 The insurer said that its total “reinsurance premiums for FY23 have increased significantly as a result of the hardening global reinsurance market,” indicating much higher costs it seems.

The company is also expecting to increase its natural hazard allowance for FY23 to $1,160 million (up from FY22: $960 million), because of the changes to the reinsurance program and the FY22 hazard experience.

These changes are also expected to increase target capital for Suncorp by $135 million, while its Excess Technical Provisions in capital are expected to reduce by approximately $170 million for FY22.

The much higher catastrophe aggregate reinsurance attachment point will reduce the likelihood of this layer attaching over the coming year.