Insurance claims filed from the severe flooding this July in the New South Wales region of Australia have risen overnight by another 23% to 8,415, but so far the estimate for insurance and reinsurance market losses remains low.

Flood waters are now receding in the Sydney area, but further north impacts continue and some towns remain flooded, while the forecast is for the low-pressure system off the coast to continue driving strong winds and some rainfall into parts further north.

Now, as of Thursday morning, the number of insurance claims has risen further to 6,853 as of early this morning, a 57% increase.

The Insurance Council has now updated the claims filed number to 8,415, another 23% increase to yesterday’s figure.

But, at the same time the ICA has reported an initial estimate of insured losses of just $97.9 million, a figure that is certain to rise as greater clarity over the impacts from the flooding emerge.

The good news for the insurance and reinsurance market is that claims from this latest July 2022 flood event in Australia are still tracking well-below other recent flood catastrophe events that have affected the country (see chart below). 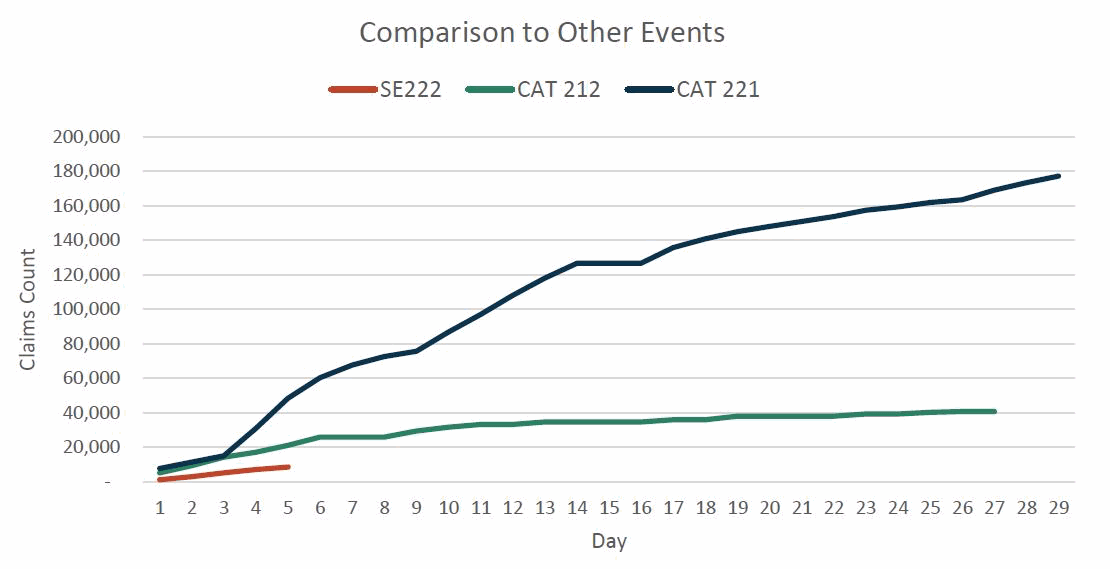 These 8,415 claims are split into 84% for property damage, 14% for motor and 2% for commercial insurance claims.

The July 2022 flooding in Australia is still termed a “significant event” rather than an insurance catastrophe.

Flooding persists in some areas and the ICA’s event definition spans across large parts of Sydney, the Hunter and mid-north coast.

The outlook for more rainfall and potential flooding over the coming months is not looking good, as Australia’s Bureau of Meteorology said yesterday that a wetter August to October is to be expected for much of Australia, with the east particularly exposed.

Rainfall is likely to be above median, the BOM said, with an 80% chance much of the Northern Territory, Queensland and New South Wales experienced above average rainfall over those coming months.

“Large parts of northern, central, and eastern mainland Australia (away from the southern coastline) are around 2 to 3.5 times more likely than average to have unusually high (in the top 20% wettest of all years over 1981–2018) rainfall for August to October,” the BOM said.

More rainfall is forecast for the Sydney area over the next week as well, which if heavy could exacerbate recovery from this recent flood.

2022 has now seen some eastern parts of the country flooding three or four times, with this latest episode set to add to the misery of residents and business owners.

Recall, these July 2022 floods in Australia have struck just as parts of the eastern and southeast coastal areas of the country are in recovery after a number of flood events that occurred earlier in the year.