Swiss Re holds onto reinsurance top-spot, driven by non-life expansion

Swiss Re has stayed at the top of the Top 50 Global Reinsurance Groups leaderboard, as significant growth in large non-life transactions helped the company increase its gross premiums written by 16% in 2019. 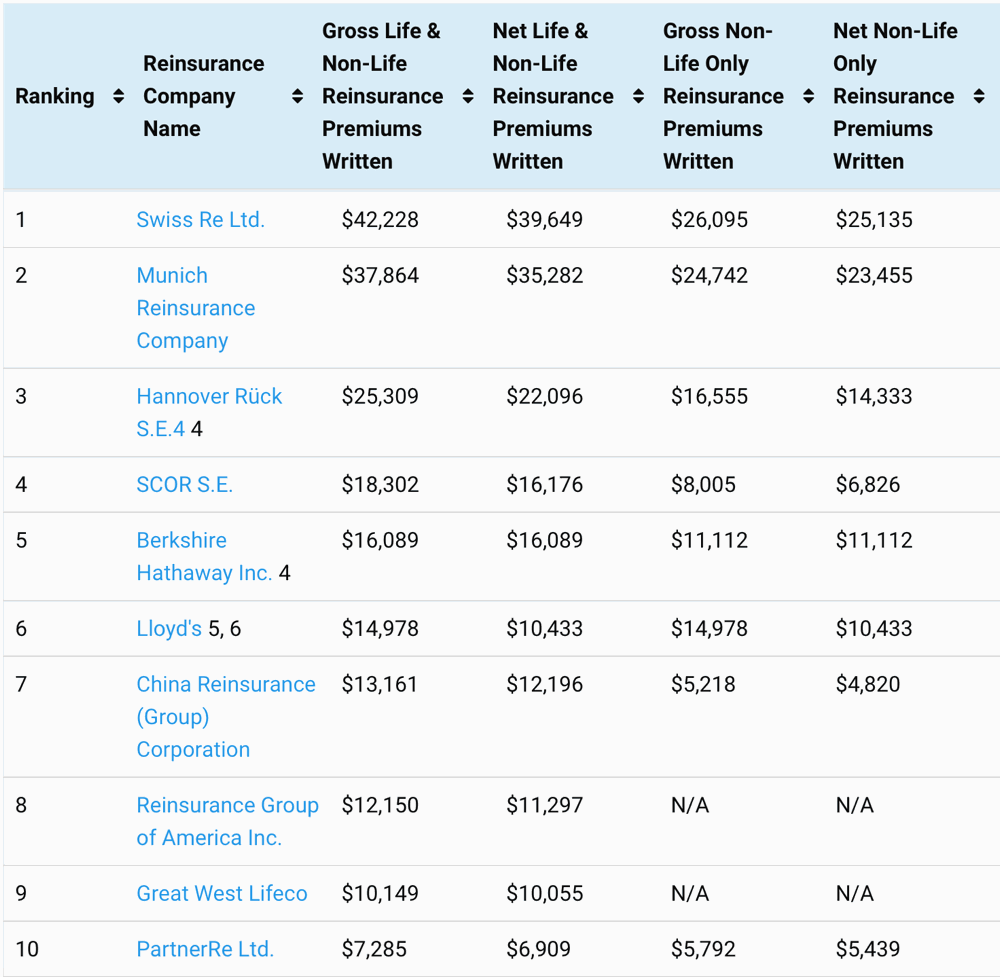 According to the latest data of the 50 largest reinsurance groups in the world from rating agency A.M. Best, which is available to analyse here over at our sister publication Reinsurance News, Swiss Re’s non-life book expanded by an impressive 25.1% last year, mainly due to large transactions  in the Americas and EMEA.

As a result of the significant growth, A.M. Best noted that Swiss Re, “widened its lead over the No. 2-ranked Munich Reinsurance Company.”

Helping Swiss Re in this expansion of non-life reinsurance underwriting has been its growing use of alternative capital, which as we revealed the other day now sees the reinsurer managing almost $2.5 billion of third-party investor assets in its sidecars and internally managed catastrophe bond portfolios.

AM Best said that natural catastrophe business growth and rate activity in underperforming lines has been a contributor to Swiss Re’s continued expansion.

Swiss Re sits at number one in the reinsurance group top 50, with gross premiums underwritten in 2019 reaching US $42.2 billion.

“Swiss Re and Munich Re will likely continue to occupy the top two spots on the list, as they accounted for nearly 30% of the Top 50’s total GPW in 2019, further demonstrating the dominance of large reinsurers at the top of the list,”explained Scott Mangan, associate director, AM Best.

The reason for the increase was primarily due to social inflation in U.S. casualty business and typhoons in Asia, as well as loss creep from 2018 storms, AM Best said.

The top 10 reinsurance groups accounted for 69% of the top 50’s total GPW, AM Best said.

“In recent years, this percentage has consistently been around 70%, which reinforces AM Best’s sentiment that the industry’s largest reinsurers continue to house disproportionately sizable amounts of risk, despite cedants’ efforts to diversify their reinsurance panels and spread out their counterparty risk,” the rating agency explained.

Analyse the full list of the Top 50 Global Reinsurance Groups.

Analyse the full list of the Top 50 Global Reinsurance Groups.