Our sister publication Reinsurance News surveyed a segment of its industry readership as to how high they anticipate the insurance and reinsurance market loss from the recent severe storm and tornado outbreak will rise, with the largest percentage opting for between $2.5 billion and $5 billion.

Official industry loss estimates are still lacking, aside from Karen Clark & Company’s around $3 billion from earlier this week.

But analysts and other commentators have said the industry loss may reach higher, with some suggesting it could even prove as costly as the 2020 Midwest state Derecho event, that resulted in industry losses of around $7 billion.

So, our team decided polling the reinsurance focused readership of Reinsurance News would provide a reasonable representation for what the broader industry practitioner base is anticipating.

Interestingly, while the largest percentage opted for the insurance and reinsurance market loss to fall between $2.5 billion and $5 billion, which seems a reasonable banding to put it in, the majority actually opted for a loss of greater than $5 billion. 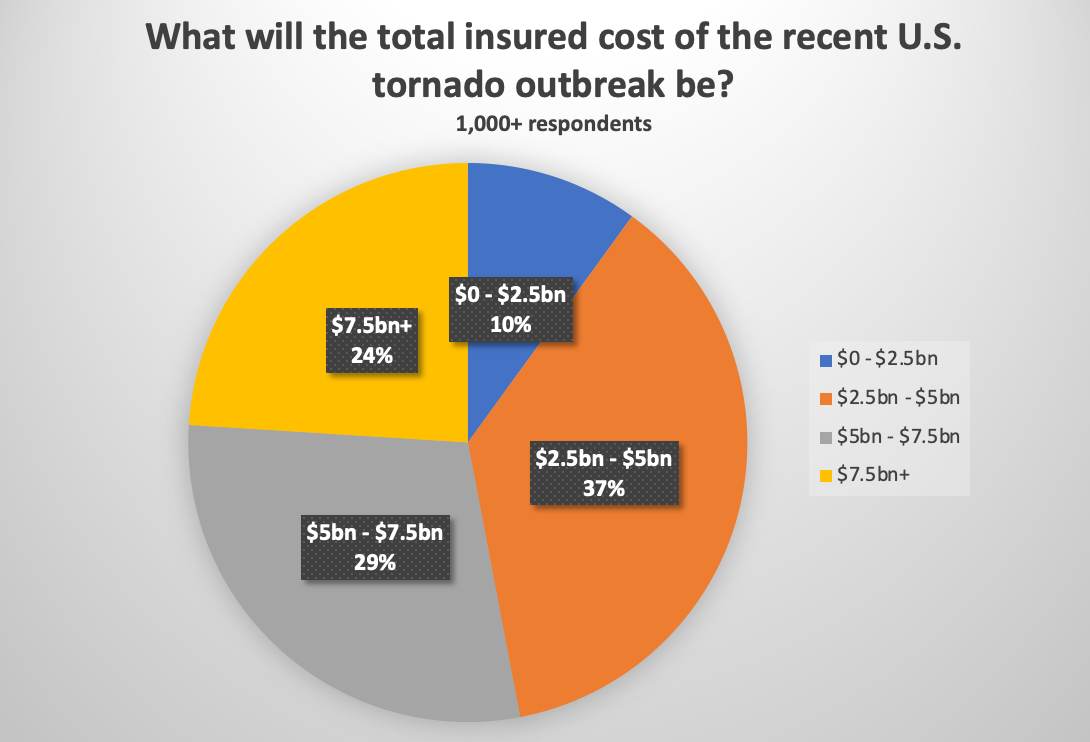 Just 10% of the more than 1,000 respondents opted for the eventual industry loss from the tornadoes settling at below $2.5 billion.

The largest proportion, or 37%, opted for an industry loss of between $2.5 billion and $5 billion.

So what to make from that?

The $2.5 billion to $5 billion mark seems to be where we’re hearing brokers and other industry facilitators are telling their clients to prepare loss reserves for, at this stage.

But there is a large number in the reinsurance industry that feel the eventual toll, once all of the damage from across the very wide area affected has been counted, could rise into the upper-end of the single-digit billions, it seems.

Interestingly, reinsurance broker Guy Carpenter has said that insured losses are estimated as high as the mid-single digit billions, which aligns with our survey majority response.

But the broker also cautioned on looking too much higher, saying that commentaries suggesting a loss as high as the 2020 Derecho, of around $7 billion, “are likely aggressive with the early knowledge of the event.”

It is still very early for a clear picture of a catastrophe loss with such a wide foot-print and with some set to bundle losses from severe weather on days either side with the tornado outbreak as well, it could be some time before the industry has an accurate picture of its exposure.

– US tornado toll likened to $7bn industry loss from 2020 Derecho.

– Tornadoes a multi-billion loss, a “limited portion” for reinsurance: Aon.

– Properties with reconstruction value of $3.7bn exposed to tornadoes: CoreLogic.