So-called secondary perils are driving insured losses around the globe, according to reinsurance giant Swiss Re, who also said the fingerprints of climate change are evident in the increasing frequency and severity of losses.

Swiss Re reports an estimated $35 billion of insured losses from natural catastrophes through the first-half of 2022, as well as another $3 billion of man-made disaster losses.

Swiss Re’s estimate for global insured natural catastrophe losses from H1 2022 is 22% above its average for the last decade, of $29 billion. 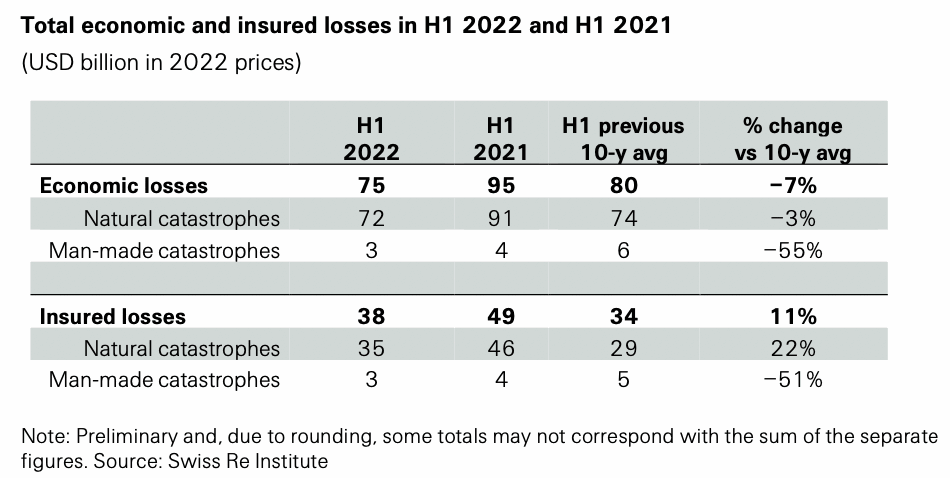 Secondary perils have been a major contributor, the reinsurance firm believes, with hailstorms and flooding continuing to drive insurance losses globally, something Swiss Re says is “exacerbated by rapid urban development and wealth accumulation in disaster-prone areas.”

“The severe weather events of the past six months once again highlight that natural catastrophes, particularly secondary perils, are increasing in frequency and severity in all regions,” the company said.

There are also perhaps losses to add to the figure, as the reinsurer noted that, “The record-high temperatures in many parts of Europe may lead to further losses caused by droughts and wildfires.”

Commenting on the first-half nat cat activity, Martin Bertogg, Head of Catastrophe Perils at Swiss Re, said, “The effects of climate change are evident in increasingly extreme weather events, such as the unprecedented floods in Australia and South Africa.

“This confirms the trend we have observed over the last five years, that secondary perils are driving insured losses in every corner of the world. Unlike hurricanes or earthquakes, these perils are ubiquitous and exacerbated by rapid urbanisation in particularly vulnerable areas.

“Given the scale of the devastation across the globe, secondary perils require the same disciplined risk assessment as primary perils such as hurricanes.”

Jérôme Jean Haegeli, Swiss Re’s Group Chief Economist, added, “Climate change is one of the biggest risks our society and the global economy is facing. With 75% of all natural catastrophes still uninsured, we see large protection gaps globally exacerbated by today’s cost-of-living crisis.

“Partnering with the public sector, the insurance industry is critical for strengthening society’s resilience to climate risks, by investing in and underwriting sustainable infrastructure.”

Interestingly, while insured losses from natural catastrophes are seen as 22% above the ten-year average by Swiss Re, the economic loss estimate is $75 billion, for nat cat and man-made losses, which the reinsurance firm estimates to be below average.