Catastrophe bond and insurance-linked security (ILS) rates-on-line retreated during the third-quarter of 2020, as the expected effects of seasonality hit one of the market benchmarks, the synthetic ILS rate-on-line Index calculated by Lane Financial.

Despite the clear retreat in rates, as they tumbled by almost 18% during the quarter, ILS focused consultancy Lane Financial LLC remains bullish on the prospects for the hard market in catastrophe bond pricing to persist into 2021.

Rates had been rising persistently through recent quarters, aside from the regular seasonal blips. But this year the retreat seen in the third-quarter is more significant than in most recent years, perhaps simply a reflection of the very strong run cat bond and ILS rates have had of late. 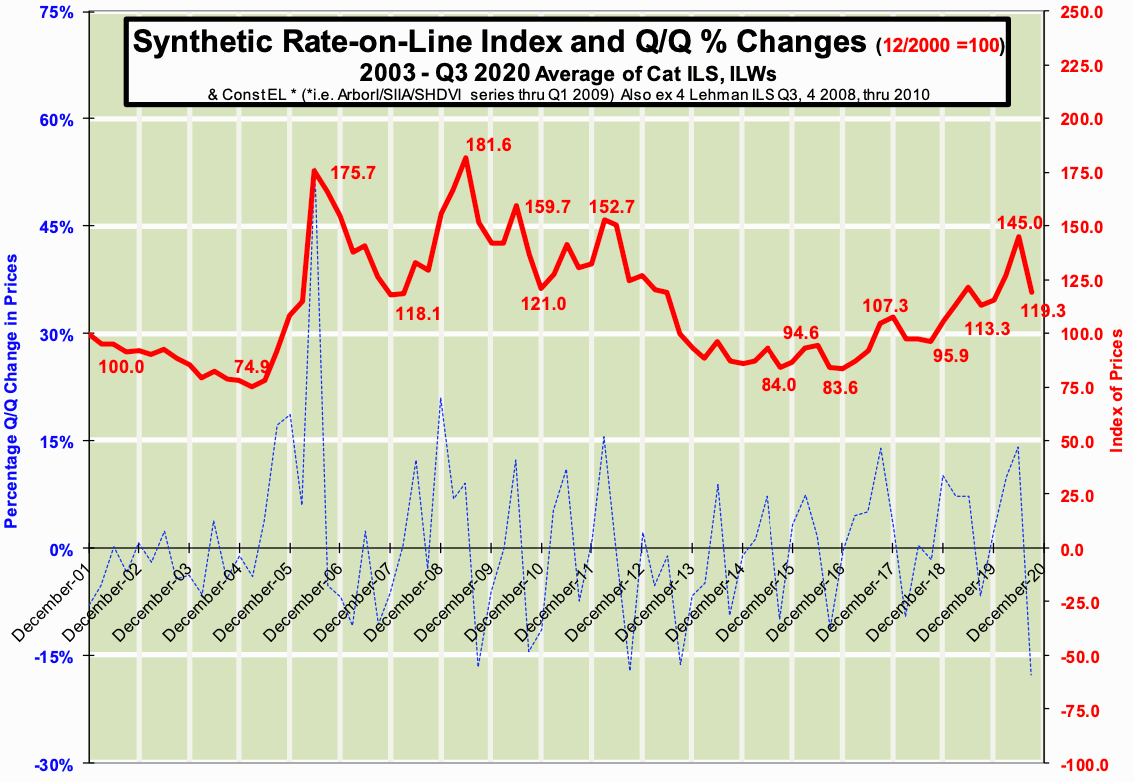 Looking at the chart above, the decline in rates of almost 18% is actually the sharpest quarterly decline seen in the record.

Lane Financial muses why this could be in its recent report.

Prices rose in the second-quarter as investors demanded better returns for staying on-risk through the hurricane season, given the forecasts for a particularly active year.

But as the third-quarter unwound, it became clear that so far losses had not impacted the catastrophe bond market and as Lane Financial explained, “Investors took advantage of the high yields and bid up prices aggressively as the season of threat began to melt away. Falling prices prior to the hurricane season and rising prices after or towards the end of the season happens every year – see seasonality shift tables. These moves were perhaps more dramatic this year because of higher, hard market, absolute levels of yield but they are not uncommon.”

Investors entering the market might also have been responsible for some of the rise in prices, Lane Financial muses, as ILS and reinsurance in general remain particularly attractive at this time versus similar securities.

Another factor affecting the quarter has been the subrogation payments related to wildfire losses, which have helped in particular some recoveries in value of USAA’s catastrophe bonds, as we explained previously here.

All of this has an effect on the returns of the market, prices and as a result the synthetic rate-on-line index that Lane Financial calculates.

“Traces of these various effects can be seen in each of the tables and graphs of this report including our Synthetic Rate-on-Line Index,” the consultancy explained. “It has retreated, as is its seasonal pattern.”

But overall, the catastrophe bond market remains influenced by the firming of reinsurance and retrocession rates and Lane Financial says, “We are still in a hard market and may be so for at least the first half of next year; longer if events cause major losses before that.”

Again, this is partly seasonal, due to the mix of issuance that tends to come to market in the third-quarter being quite different given the hurricane season is at its peak.

The excess return of the catastrophe bonds and other reinsurance focused ILS instruments tracked by Lane Financial showed that annualised based on 2020 to-date, the year currently looks set to be one of the strongest five for cat bond market returns.

That’s as long as losses remain scarce and Lane Financial rightly warns that, “That will depend on what happens in the 4th Quarter – winds may yet blow (Delta?) and the earth may yet shake in the last part of the year.”

It will be interesting to see how the Lane Financial synthetic rate-on-line Index behaves after the fourth-quarter, being a key issuance point of the year with the reinsurance renewals approaching.

With a chance that cat bond fund managers raise new capital to support new issuance, there is a likelihood the Index may be a little suppressed. But any kind of return to increases will further signify the persistent nature of the current ILS hard market, it seems.

Lane Financial’s synthetic rate-on-line Index makes use of data from catastrophe bond, insurance-linked security (ILS) and industry-loss warranty (ILW) markets, offering an approximation of premiums being paid (or rate-on-line) for ILS and cat bond backed reinsurance and retrocession. It is considered one of the ILS sectors bellweather benchmarks.