A magnitude 5.7 earthquake has struck the Salt Lake City area of Utah, U.S., the largest quake to hit the area in 28 years and big enough to cause some damage to buildings in Magna, West Valley City and Salt Lake City itself. 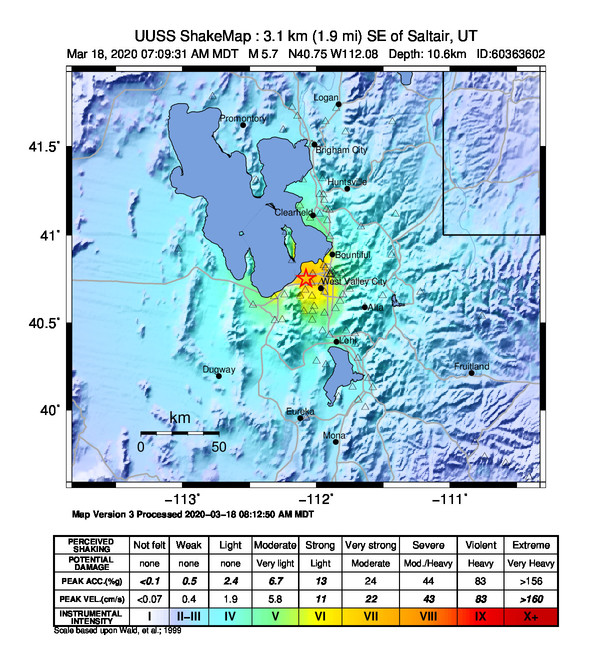 The state of Utah is not a region that has significant coverage provided to insurers from the catastrophe bond market, although there are a number of transactions covering quake risk in the State.

So there is more potential exposure in the ILS market to reinsurance contract claims as a result of the quake, should damages prove to be sufficient to trigger any programs.

Under that circumstance, there could be a chance of some claims leakage into the insurance-linked securities (ILS) market through collateralised reinsurance or retrocession arrangements, although right not it appears unlikely.

At the moment information on damage is limited, but reinsurance broker TigerRisk Partners was quick to report on the event and had the following to say:

– The cities of Magna and West Valley City experienced the strongest shaking from the quake this morning at MMI VII. Areas that experience MMI VII shaking will exhibit considerable damage in poorly built or badly designed structures.

– Ordinary structures might be slightly to moderately damaged. Engineered structures are not expected to show damage.

The USGS has said that there is a 32% chance of economic losses exceeding $100 million and a 14% chance they exceed $1 billion.

At this time it looks like damage won’t be particularly severe except for in the localised area of the epicentre.

But as claims come in, it is possible some insurers could find the claims burden sufficient to enable them to claim on quota share reinsurance protection, with that being the most likely source of any impact to the reinsurance market we’d imagine.

Aftershocks of around M3.0 to as intense as M4.4 continue to hit the area at this time.