The Texas Windstorm Insurance Association’s (TWIA) mid-year 2020 reinsurance and catastrophe bond renewal looks set to depend on pricing this year, as the insurer is aware of challenges faced in both marketplaces and will look to maximise on coverage at the best possible and most efficient pricing as it builds its 2020 reinsurance tower.

Speaking yesterday during a TWIA Board meeting, Jerry Fadden, the Chief Financial Officer (CFO) of TWIA, explained that while $200 million is the target for a new Alamo Re II catastrophe bond issuance for 2020, that won’t be at any cost.

As we explained yesterday, TWIA is set to return to the catastrophe bond market in the coming weeks with a new Alamo Re II Ltd. catastrophe bond issue, as it cements the role of the capital markets within its reinsurance arrangements.

While the targeted size remains at $200 million, this is subject to change and as ever is dependent on pricing across traditional reinsurance and insurance-linked securities (ILS) markets, which TWIA is aware has changed since its last renewal.

Speaking to the TWIA Board today, CFO Fadden said, “We intend to have in place $4.2bn in coverage for the 2020 hurricane season.”

That will be made up of the $2.1 billion of funding from the Catastrophe Reserve Trust Fund, member assessments and pre or post-event debt funding sources.

TWIA will look to add $200 million of new cat bonds through an Alamo Re II 2020-1 issuance, alongside $1.3 billion of traditional reinsurance, bringing total funding to a target of $4.2 billion.

Discussing the state of the reinsurance and ILS market, Fadden highlighted the disruption caused by the Covid-19 pandemic.

“The overall reinsurance industry has had some disruption to it, like other industries in terms of the impact of the Covid-19 pandemic. While this is not relevant to TWIA’s portfolio, many reinsurers are anticipating significant losses from business interruption and other commercial coverages as a result of Covid-19.

“That plus the general investment losses that may have occurred in the first-quarter, has resulted in a general increase in the cost-of-capital,” he explained.

Adding, “So we’re hearing the drumbeats of reinsurers seeking higher returns on their exposure.”

This is perhaps an opportunity for the catastrophe bond market to grow its share of the TWIA reinsurance program back to where it sat previously, as last year cat bonds made up $1.1 billion of the program.

He continued, “We’re in the middle of those discussions and we’ve so far had some favourable responses from our reinsurers who’ve been big supporters of ours.

“So while it’s a difficult market, I remain optimistic that we will successfully place the reinsurance and that we will have relatively good pricing despite an overall challenging market.”

On reinsurance and catastrophe bond pricing he added, “We expect it to be not as good as we’ve achieved in the past, but remains to be seen exactly where it comes in.”

You can see the proposed TWIA 2020 reinsurance and funding tower below. We’ll update you when the planned Alamo Re II Ltd. (Series 2020-1) catastrophe bond is launched to the market. 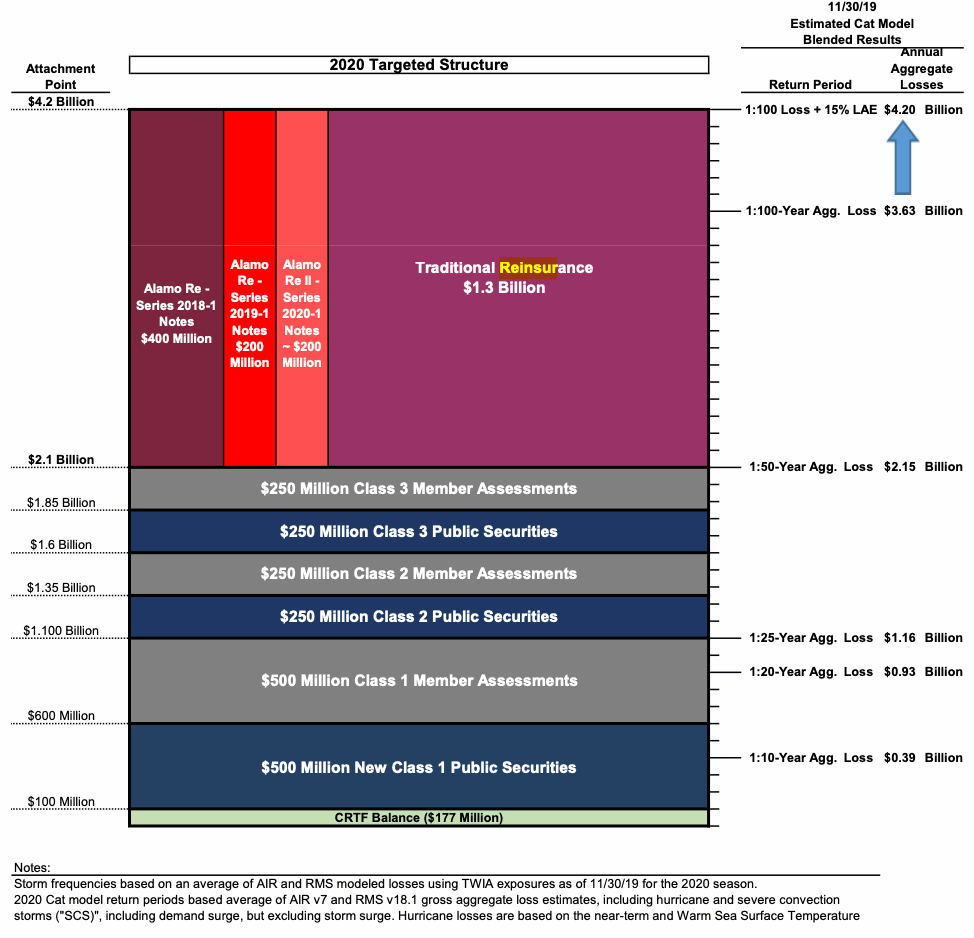 As ever, TWIA will mix its sources of reinsurance capital depending on availability, price and efficiency, as it looks to secure its reinsurance tower in the most effective manner possible.