Mt. Logan Re Ltd., the collateralized reinsurance, sidecar-like investment vehicle of global reinsurer Everest Re, grew by 18% over the year to January 1st 2018, reaching $1.028 billion of assets in time for the key renewals.

At January 1st 2017 Mt. Logan Re had assets for collateralized reinsurance deployment of $869 million, but by 1/1 2018 that had increased dramatically, despite having been through the heavy hurricane and other losses of last year.

The Mt. Logan Re vehicle had been hit by the major catastrophe losses of 2017, which saw its assets under management decline from $949 million at the beginning of July, to $833 million at the 1st October 2017.

But strong capital raising and likely an element of reserve collateral releases meant that the vehicle grew significantly to $1.028 billion, according to an investor presentation from parent Everest Re.

Mt. Logan Re is now the largest the vehicle has been since its launch for 2013.

This is the largest that the Mt. Logan Re vehicle has been, which is likely due to the fact rate rises following the catastrophes have given the management team the opportunity to accept more investor inflows.

Everest Re counts Mt. Logan Re as one of the reinsurers sources of capacity, with the collateralized vehicle alongside the company’s catastrophe bond issuances both bringing efficient capital from institutional markets within the reinsurers capital structure.

As of January 1st 2018, Everest Re has $2.825 bilion of catastrophe bond protection outstanding, placing the company at the top of our cat bond sponsors leaderboard.

Mt. Logan Re is a growing piece of the third-party capital puzzle for Everest Re now as well, having passed the billion dollar mark it looks set to become increasingly important to the company, as both a source of retrocession to support its own growth, as well as a source of fee income.

Everest Re is fast approaching $4 billion of support from alternative capital and ILS investors, through its catastrophe bond transactions and the Mt. Logan Re vehicle. 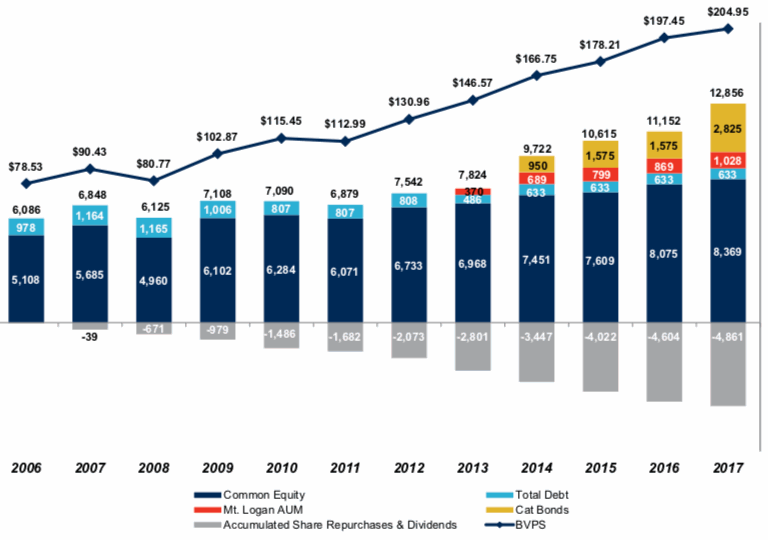 The two prongs of this strategy support its own front-end underwriting growth, enabling it to share risks that do not sit as well on its balance-sheet with third-party investors, recouping fee income and retrocession benefits at the same time.

Interestingly, at the same time as the use of alternative capital has increased at Everest Re, its use of debt has declined somewhat, then remaining static across the last four years.

Alternative capital can provide an alternative funding source, in some cases as or more efficient than debt issuances, particularly when there are hedging benefits and fee income to benefit from as well.

The capital markets continue to help to propel Everest Re’s overall growth, with the combined pool of capacity offered by Mt. Logan Re and the catastrophe bonds outpacing the reinsurance firms own balance-sheet for growth.

These activities help Everest Re to add efficiency to its underwriting capacity through partnerships with the capital markets, while providing income that helps it to maintain returns to shareholders at a time when the reinsurance market has been challenging.