Southern Mexico was struck by a significant Magnitude 7.4 earthquake on Tuesday at around 15.30 UTC, but while the location of the earthquake appears to have fallen within a box relevant to the parametric trigger of the World Bank supported IBRD / FONDEN 2020 catastrophe bond, it does not look strong enough to have triggered any of the notes. 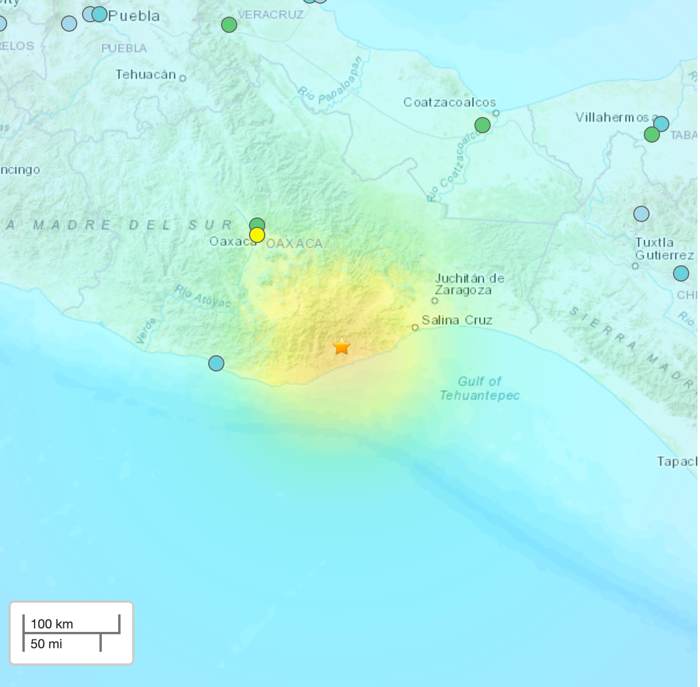 This catastrophe bond was Mexico’s sixth transaction and the $485 million issuance provides the country with a four-year source of parametric earthquake and hurricane insurance protection.

The parametric triggers are constructed using boxes, to represent different location zones, with different magnitudes of earthquake needed to occur within a specific box in order to determine how much of a payout that would equate to.

Yesterday’s earthquake struck near Mexico’s souther Pacific coastline, causing damage largely in the state of Oaxaca, but with buildings also experiencing some minor damage in Mexico City, the capital that is hundreds of miles away.

The M7.4 earthquake epicentre appears to have fallen within the parametric trigger area, but the specific location appears to require a higher magnitude of quake to occur in order for any payout or loss of principal to be triggered.

As a result, in this case it looks like the Mexico catastrophe bond transaction will be safe from any loss.

Specialist insurance-linked securities (ILS) and reinsurance investment manager Twelve Capital said in an announcement to its investors that it also believes the World Bank issued FONDEN cat bond will be safe from loss..

“Within the Cat Bond market, two “Fonden” transactions sponsored by the IBRD are exposed to earthquake risk in Mexico. These transactions feature a parametric trigger requiring certain earthquake magnitudes within pre-defined GPS locations.

“With a magnitude of 7.4, yesterday’s earthquake does not meet the required parameters to trigger these bonds and hence Twelve Capital does not expect any impact on Cat Bond portfolios at this point,” the investment manager explained.

The quake has caused widespread damage in the local area, as well as some damage further afield, with a number of deaths also reported. However it does not appear likely to become a particularly significant event for the insurance or reinsurance market at this time.

We will update you should any further information become available that suggests the IBRD / FONDEN 2020 catastrophe bond faces any threat.