The Lloyd’s of London market needs to “reset the way in which insurance and reinsurance is transacted globally” according to its Chief Executive John Neal, who suggested yesterday that the way Lloyd’s has engaged with new capital is just one of its failings. 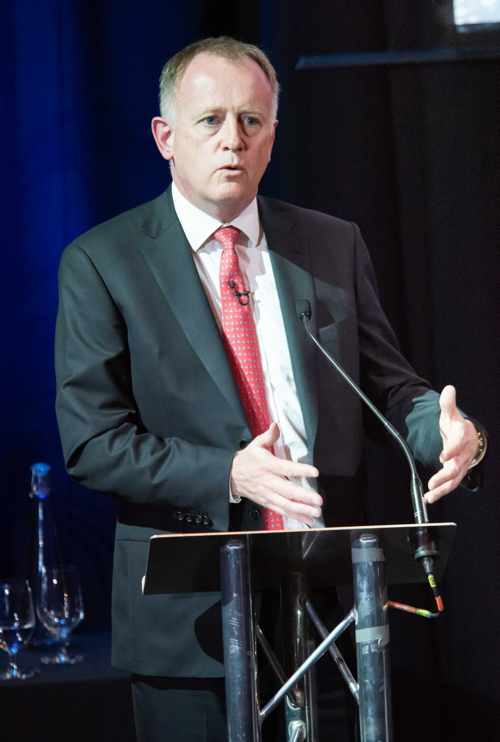 Speaking at the Marsh & McLennan Companies Rising Professionals’ Global Forum 2019 in London yesterday, Neal admitted that the Lloyd’s market is perhaps not fit for purpose in the current era of rapid technology driven innovation and even faster capital flows.

Neal was discussing the opportunity for the Lloyd’s market to embrace digital transformation, but his comments were as ever telling and highlight a CEO of Lloyd’s who recognises that the oldest insurance and reinsurance market in the world needs to tear down the barriers to participation, particularly for capital providers.

Evolution has to be on the agenda for Lloyd’s, Neal explained, as otherwise it risks driving itself into irrelevance.

“We’re facing quite challenging headwinds,” he explained. “Our products simply aren’t keeping up with the changing landscape of risks and we’re not harnessing all of the new capital that’s knocking on the door.”

That inability to harness the capital has been a failing of the Lloyd’s market at a time when investors around the world are keen to access insurance and reinsurance linked returns.

The fact Neal acknowledges this is key, as in the past it’s not been explicitly admitted that Lloyd’s has dropped the ball on its approaches to the insurance-linked securities (ILS) market over recent years.

Neal further explained that the cost of doing business at Lloyd’s is too high, saying, “For every $100 the customer pays us, the best value they get back is $60. I can’t think of an industry outside of our own where that would be tolerated.”

In order to address that Neal said that Lloyd’s can, “reset the way in which insurance and reinsurance is transacted globally.”

A bold vision. But whether this is really possible in a business so mired in history and legacy as Lloyd’s, remains to be seen.

He said, “Lloyd’s has always been a platform – a marketplace where brokers, underwriters and capital have come together to create and exchange value by exchanging risk, ultimately for the benefit of our customers. The building blocks are in place. Now we have the challenge of unlocking and evolving a 330-year-old platform.”

“We want a collaborative expert community that improves underwriting and provides consistently excellent products and services,” he continued.

Explaining that, “For capital, it means making it easier and less expensive to attach to risk. For brokers, it means the value proposition of being part of the Lloyd’s ecosystem creates accelerated growth opportunities and that ultimately creates true and unique value for customers.”

Cutting the cost for capital to access risk within Lloyd’s is one thing, but it cannot be expected that capital is just a following pool of retrocession for a Lloyd’s market that is continually trying to improve its performance.

The recently published prospectus plan suggests that investors would be more of a supporting capital source, following the underwriting fortunes of the market, rather than as a fully aligned capital partner.

While at the same time, some of the leading Lloyd’s businesses already have aligned ILS and third-party reinsurance capital vehicles established outside of Lloyd’s, often offshore, which suggests Lloyd’s will need to make it very competitive to attract that capital and the ceding of business to it, to happen closer to its core.

Neal pointed out that speed and agility has not been one of Lloyd’s traits, but that led him to say that, “Our survival hasn’t yet been threatened in the way it has been in some other industries, such as retail, and when the platform isn’t burning, proactive change is just more difficult.”

We’d suggest the fire’s already been lit and is definitely smouldering away at Lloyd’s. The threat is clear and new ways of doing business in risk transfer and risk placement are right now posing an existential threat to the Lloyd’s market business model.

Not to everyone operating there of course, but in general to the old way’s of doing business and the market construct that is Lloyd’s, the threat should really be abundantly clear to everyone by now. After all it’s been discussed for more than two decades.

“As a sector, our choice is to continue with business as usual and become irrelevant or change and realise an enormous opportunity in the world of risk,” Neal said.

“We have a once in a generation opportunity to lead the marketplace in delivering innovative services and solutions. We can do that by leveraging and seizing the spirit of innovation that’s always been at the centre of the market and the trusted partnership and relationship between the customer, broker and insurer.”

Neal has a very big job to do and it is encouraging that he recognises the issues so fully.

But Lloyd’s does need to be more open to change driven from and helped by those on the outside, rather than always looking to create and internalise solutions within its own confines that may only become a future legacy drag on the market.

Case in point the development by Lloyd’s of a risk exchange for standardised exposures, which Neal said is underway and hopes to be delivered in 2020, when there are technologies already in use by the reinsurance market that could fulfill some (perhaps all) of this role for Lloyd’s players as well.

In addition, Neal said that a “next generation claims service powered by artificial intelligence,” is also being developed at Lloyd’s, another service that could well already be available from an external provider.

“Our expectation is that all the components of change agenda will be operational in some capacity by 2020,” Neal said. “We’ve got to build at speed with solutions that are adaptable and scalable.”

Is Lloyd’s itself the best owner of these technologies, which it will then ask corporate participants in its market to use, alongside all the other solutions they are already using as well?

Corporate change programs of the kind Lloyd’s is undergoing can result in sticking plasters that fall short of the visionary evolution required. Or just the development of what will become future technical debt. It’s going to be fascinating to see if Lloyd’s can buck those trend this time around.

If it can’t, then this round of change really could be one of the last chances for the oldest insurance market in the world to secure its position for the future.

It’s now or never it seems. Brave and forward-thinking strategic decisions are needed, with an open mind as to the source of the solutions.