Fitch Ratings has made an interesting observation related to the Jamaica’s first catastrophe bond, the $185 million IBRD CAR 130 transaction that came to market in July. It represents the largest World Bank facilitated cat bond, relative to the sponsor government’s GDP.

That’s important as it shows a catastrophe bond that could play a particularly significant role in aiding a countries recovery after a major natural catastrophe event.

The size of the cat bond, at US $185 million, represents around 1.3% of Jamaica’s gross domestic product (GDP), which Fitch Ratings believes “significantly strengthens the country’s natural disaster risk-mitigation strategy.”

The cat bond provides Jamaica’s government with a responsive source of parametric insurance against named storms and hurricanes and is also the first issuance to directly benefit a small island nation, Fitch explained.

Jamaica can access part or the full amount depending on the severity of the natural disaster, as measured by the parametric trigger.

Also important to note, Fitch said, is that this cat bond does not add to the national debt of Jamaica.

Major catastrophe events can result in countries having to increase their debt burden to pay for response, recovery and rebuilding, or they can drive a country to seek debt forgiveness, which often results in current national debt repayments being prolonged over longer than planned terms.

Securing responsive post-disaster risk financing, using parametric insurance and catastrophe bonds, is another way of ensuring funding is available, without having to increase the debt burden.

Fitch said that by its estimate, on average the government of Jamaica will experience an annual loss of US $125 million, or 0.9% of GDP, due to hurricanes and flooding.

Fitch also highlights the 2017 case of Puerto Rico, which after hurricane Maria struck suffered a hit that equated to the destruction of some 78% of 2016 GDP.

That really drives home the potential impact and shows how contingent sources of risk capital can help to buffer the GDP shock when disasters strike.

Hurricane Sandy in 2012 resulted in a 0.8% hit to GDP when it struck Jamaica, but 2004’s hurricane Ivan drove a much larger hit, as the below chart from Fitch Ratings shows. 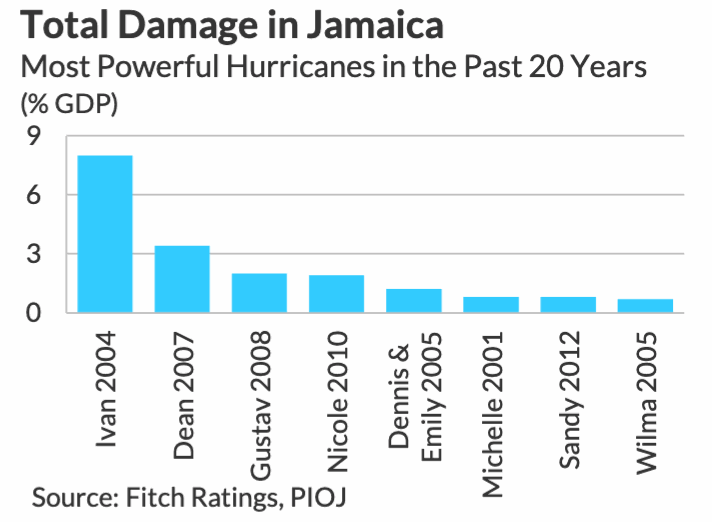 Fitch then explained that, “This cat bond is the largest issued by the World Bank relative to the size of the beneficiary economy,” which implies that the positive effects after a storm triggers it can be even more beneficial to Jamaica.

The chart below shows how this compares to other World Bank issued catastrophe bonds and clearly demonstrates that relative size of coverage, to GDP, could matter more than pure size of the cat bond issuance itself, in providing societal benefits after disasters for Jamaica. 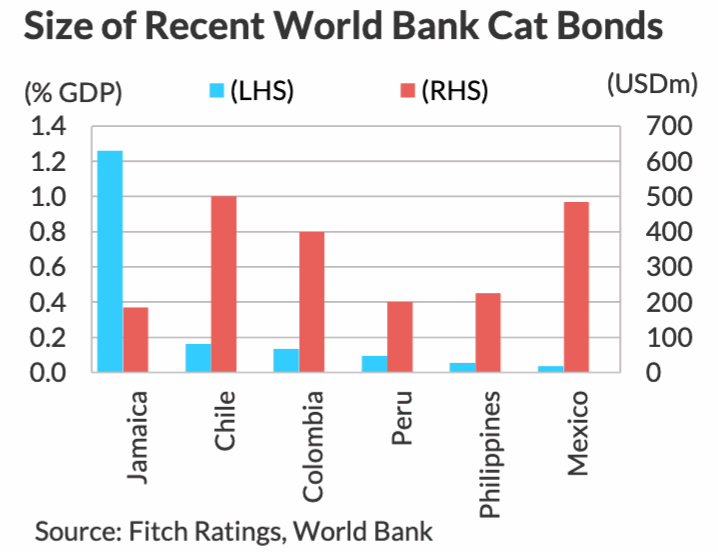 Fitch also noted the fact that Jamaica’s government hopes to be able to pay the cat bond premium coupons itself after the deal renews. It matures at the end of 2023.

As we explained recently, Jamaica’s finance minister said that the fact foreign donors paid for the premiums associated with Jamaica’s first catastrophe bond does not mean it was a “handout”.

Importantly, the minister said that the cat bond is designed to help protect economic progress that Jamaica has been making over recent years and hopes that once the country has paid down more of its debt it will be able to renew the cat bond using its own finances.

Fitch Ratings believes this should be possible, saying that, “Fitch expects that after the Covid-19 pandemic shock,
debt will continue to fall so the coupon payments could start coming from the Jamaican budget in 2024.”

You can read all about the IBRD CAR 130, Jamaica cat bond issuance in our comprehensive catastrophe bond Deal Directory.