The Artemis Catastrophe Bond and Insurance-linked Securities Deal Directory aims to provide a one-stop resource for information on every cat bond and ILS transaction we hold information on. The content of this Deal Directory is provided as is and there will be some omissions. Help us to keep these cat bond and ILS transaction summaries up to date by contacting us if you see an error or omission that you can correct.

This is the awaited first catastrophe bond to benefit the Government of Jamaica with a source of multi-year disaster risk financing.

The World Bank is set to issue the catastrophe bond on behalf of the Caribbean country, through the International Bank for Reconstruction and Development’s (IBRD) Global Debt Issuance Facility.

The issuance is taking place under the World Bank’s IBRD Capital-At-Risk Notes program, with a single class of notes set to be issued and sold to ILS investors, in order to collateralize an underlying swap agreement that provides the risk transfer and resulting disaster insurance protection to the Government of Jamaica.

As a result, the World Bank’s IBRD is the issuer of the catastrophe bonds, while the Government of Jamaica will be the beneficiary of an underlying catastrophe swap like structure agreement between it and the Bank that facilitates the protection.

The currently $175 million of catastrophe bonds will provide the Government of Jamaica with a multi-year source of disaster risk financing and insurance against tropical storm and hurricane impacts, on a parametric trigger and per-occurrence basis.

The series 130 Capital-At-Risk notes set to be issued and sold to investors will cover losses from named storms, so tropical storms and hurricanes, that have a sufficiently low minimum central pressure and breach a parametric box structure, we understand.

So the trigger for Jamaica’s first catastrophe bond is parametric, as we’d anticipated, while the protection will be on a per-occurrence basis.

We understand the named storm and hurricane protection will run across almost three hurricane seasons, with the notes maturity set for December 2023.

The currently $175 million of IBRD CAR 130 Class A notes will have an initial expected loss of 1.52% we’re told and the notes are being offered to investors with coupon price guidance in a range from 3.75% to 4.5%.

We understand that the first catastrophe bond for Jamaica could upsize slightly to $185 million in size, while the price guidance for the risk margin (coupon equivalent) being offered to investors has tightened towards the upper-end of guidance, at 4.4% to 4.5%.

Jamaica’s first catastrophe bond has now been priced at the upper target of $185 million in size, with pricing at the 4.4% risk margin, so the low end of the raised guidance range.

The World Bank shared information on the mix of investors that allocated to this transaction, with dedicated ILS funds taking 66% of the notes. The rest of the investor breakdown can be seen below. 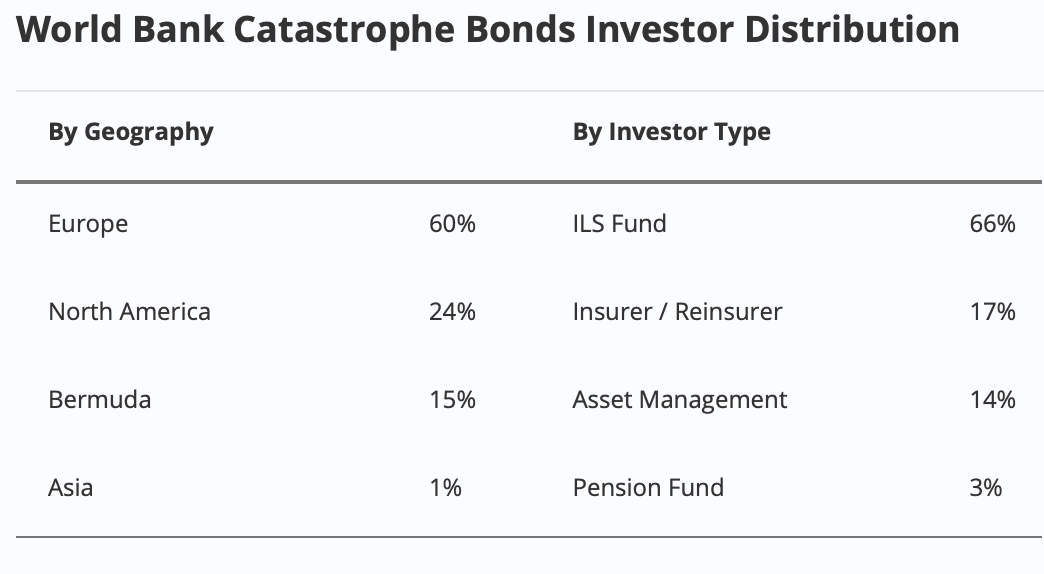 « Go back to the Catastrophe Bond Deal Directory

Help us keep this valuable resource up to date. If you have information on a catastrophe bond or insurance-linked security deal we have not covered or can see something that we should change, please contact us to let us know.

The Artemis Catastrophe Bond & Insurance-Linked Securities Deal Directory is copyright © Steve Evans Ltd. Reproduction or publication without permission is not permitted. Use of this information within a commercial product, or for profit, without a license is strictly prohibited. Contact us if you would like to use this content or to discuss licensing.