Demonstrating the significant lack of earthquake insurance in Italy the first insurance industry loss estimate from PERILS AG for the event suggests an insured loss of just EUR34m, which is a paltry amount of property insurance loss for such a damaging event.

The devastating M6.2 earthquake which struck in August in Italy, near the Umbrian town of Norcia, caused almost 300 deaths and damaged homes and businesses across a wide area. Many towns saw a large proportion of homes and structures badly damaged or destroyed in the quake, but with insurance coverage so lacking the insurance and reinsurance industry will pay very little to help the region recover.

It’s a prime example of the insurance protection gap in an advanced economy, so often thought to only exist in developing regions of the world. Earthquake insurance penetration is extremely low in Italy despite the high exposure to such events.

PERILS AG, the independent Zurich-based provider of industry-wide catastrophe insurance data, industry loss estimates and data for use in reinsurance or catastrophe bond triggers, has now disclosed its first loss estimate for the earthquake which hit Central Italy on 24th August 2016.

PERILS puts the insured property market loss for the damage caused by the earthquake at just EUR34m.

Eduard Held, Head of Products, added; “PERILS’ detailed market exposure and loss data allow a precise evaluation not only of the market-wide insured exposure to natural catastrophes but also of related loss vulnerabilities and insurance penetration levels. Regarding the variations in these levels across Italy, our market data also enable the quantification of insurance penetration per province and therefore help to quantify insurance gaps.”

The Italian Civil Protection Department said that it believed the total cost of the earthquake in Italy to the national and regional economy, including reconstruction, loss of business and tourism etc, would be around $11 billion.

Data on such losses is valuable as it will hopefully stimulate the government in Italy to do more to increase penetration of earthquake coverage, and also show insurers what the opportunity to increase awareness could do for them.

A second loss estimate report will be published on 24th February 2017 and will contain loss data by CRESTA zone, and by the property sub-lines Residential and Commercial, PERILS said. 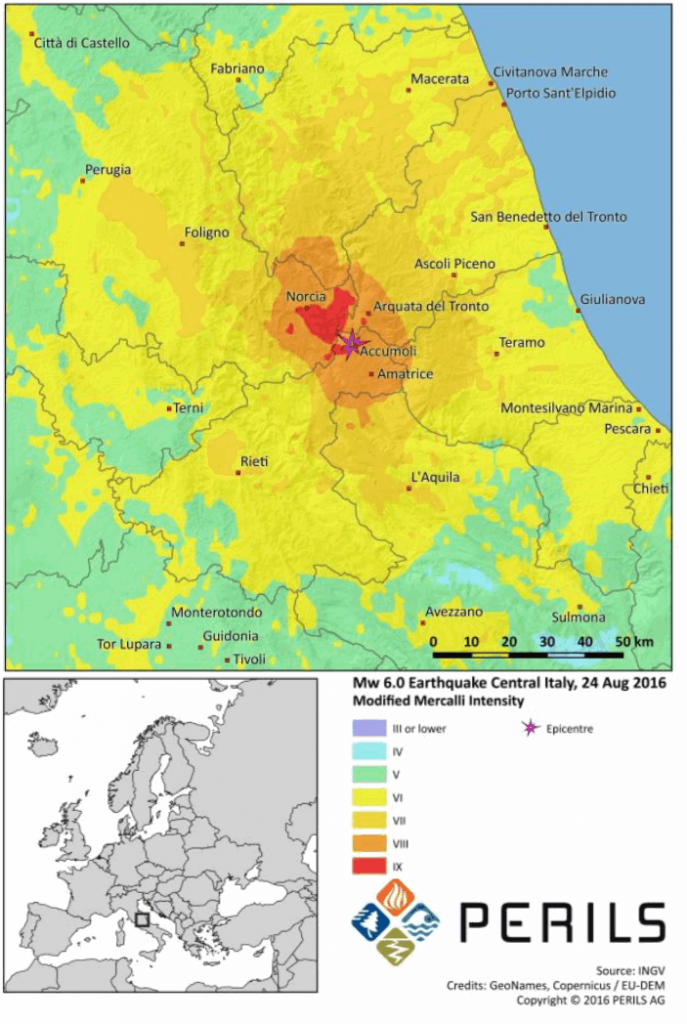