Helping to boost reinsurance returns on equity (RoE), insured catastrophe losses have fallen to their lowest level seen since 2006 in the first-half of this year, according to broker Aon.

Only $20 billion of insured losses were sustained by the public and private insurance and reinsurance market during the first-half of 2019, meaning that all major regions are now well below average, in terms of half-year cat losses, Aon said.

Economic losses came in at $73 billion for the same period, which is actually higher than last year 2017 and 2014, showing that in 2019 the insured portion of the loss is much lower than would typically be seen.

The 10-year average for first-half catastrophe insured losses is around $36 billion, while the median is $28 billion. 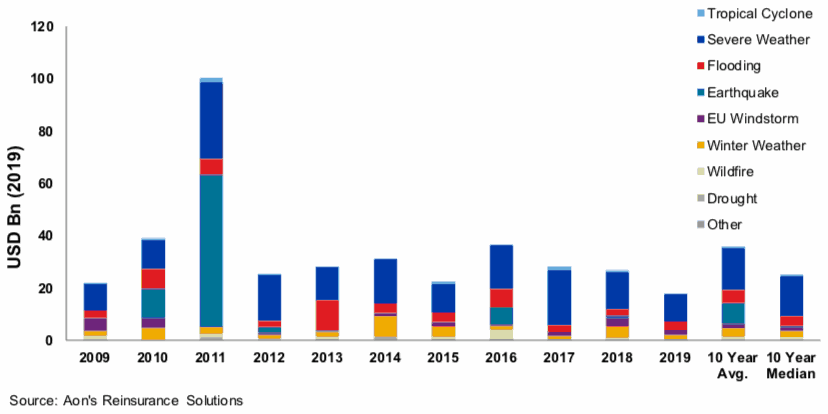 So far in 2019, only four $1 billion plus insured catastrophe loss events have been recorded, three of which were related to severe convective storm activity in the United States and one from European windstorm Eberhard in March.

The majority of losses were incurred in the U.S., Europe and Australia during the period, Aon explains.

Severe storms which includes convective weather was the main driver of the loss, at just under $12 billion of the insured total for the first-half of the year. See the below image that was tweeted by Impact Forecasting’s Steve Bowen today.

The $20 billion tally remains preliminary and Aon does expect it to rise, but right now it still sits as the lowest since 2006.

The data does not include crop losses in the United States from the flooding that is ongoing, which could raise the total further, the broker said. In addition crop losses in Europe could also add to the total.

The costliest catastrophe event in the period was a late May outbreak of severe convective weather, characterised by tornadoes and hail, which cost the insurance sector roughly $2 billion.

Almost two-thirds of the losses were suffered in the U.S. (around 66%), with the convective storm peril driving the majority of this.

However, all regions losses in the first-half of 2019 fell below the average and the median, as shown below. 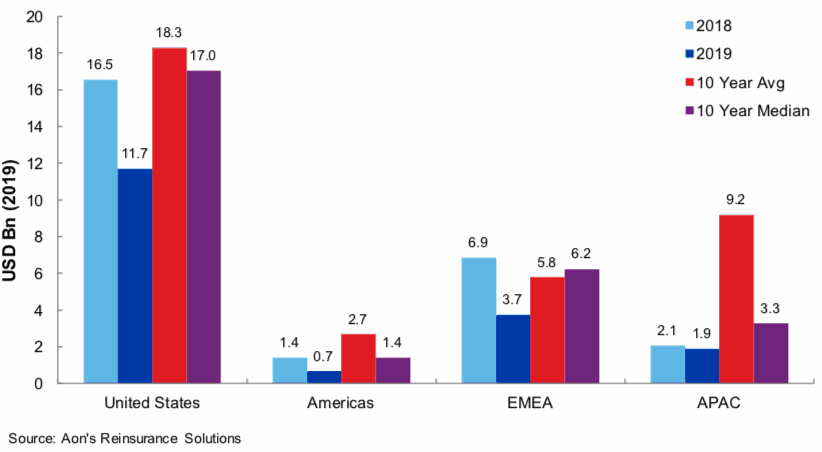 “If current trends from the first half of the year continue, 2019 is on pace to be below normal for the entire year,” insurance and reinsurance broker Aon explained.

However, with the hurricane season just getting underway and plenty of the year to run, it’s important to remember that it only takes a single major catastrophe loss to wipe out insurance and reinsurance market earnings.