Hurricane Willa has intensified on approach to the Pacific coastline of Mexico with its winds reaching Category 5 strength at 160 mph and the central pressure dropping further to 925 mb, increasing its threat to trigger a $110 million Class C tranche of notes from the World Bank supported IBRD / FONDEN 2017 catastrophe bond when it makes landfall.

Update October 23rd: The minimum central pressure of hurricane Willa has now risen to 942 mb, putting the Fonden 2017 Mexican catastrophe bond in the clear and investors safe from losses.

Hurricane Willa currently has sustained winds of 160 mph, with higher gusts and a minimum central pressure that has declined to 925 mb, positioning the storm as sufficiently intense to activate the parametric trigger for the Fonden 2017 catastrophe bond and cause a payout. 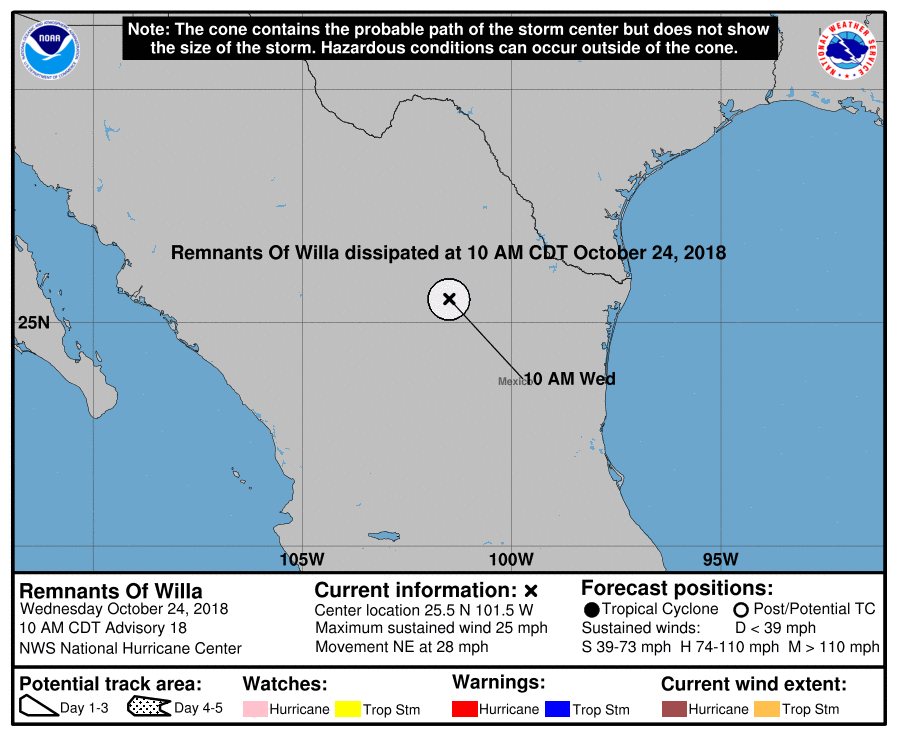 The $110 million tranche of Class C notes, issued through this latest incarnation of the MultiCat Mexico catastrophe bond that was distributed as IBRD catastrophe-linked Capital At Risk notes by the World Bank, provides the country with a source of insurance and reinsurance protection against Pacific named storm or hurricane impacts.

The notes are structured with a parametric trigger, meaning it is the location, intensity and any other payout factors related to a Pacific hurricane that can trigger a payment and ultimately loss of principal for the investors and ILS funds backing the catastrophe bond deal.

In order for a payout to be triggered and due, the central pressure of a hurricane has to be calculated as low enough when it enters or crosses into a named storm parametric box or area.

When we wrote about this storm earlier today the central pressure was reported by the NHC as 931 mb, but with the intensification that was suggested having now happened and hurricane Willa reaching Category 5 strength, the pressure has dropped further to 925 mb.

For hurricane Willa, based on where the storm is likely to make landfall, a 25% payout of principal could occur if the central pressure drops to between 935 mb and 933 mb. Central pressure of 932 mb down to 921 mb can trigger a 50% payout. While a central pressure that falls to 920 mb or below can cause a 100% payout of the principal associated with this catastrophe bond tranche.

With hurricane Willa currently a very intense storm, whose central pressure has continued to drop and now sits at 925 mb as of the latest National Hurricane Center update, this storm is capable of causing a 50% payout of this tranche (based on the parametric trigger details), should it maintain sufficient intensity all the way to its landfall tomorrow.

With winds now put at 160 mph and higher gusts hurricane Willa is likely to have a devastating impact on the coastal populations of Mexico where it makes landfall.

The NHC says that some further strengthening is forecast through the rest of today, meaning hurricane Willa may remain Category 5 intensity through today and perhaps into tomorrow.

Hurricane Willa is forecast to accelerate forwards towards the Mexican coastline, but the NHC continues to warn that some weakening is possible prior to landfall, which makes forecasting its potential to trigger this cat bond fraught with difficulty.

Any weakening prior to landfall will result in the minimum central pressure rising, making the threat to the Fonden 2017 cat bond very uncertain.

Adding to the uncertainty is the fact the parametric gate for the trigger sits offshore of Mexico and it is the central pressure at the time the eye of the hurricane crosses that gate that matters, in defining whether a payout will be due.

Hurricane Willa’s landfall is expected late on Tuesday night or in the early hours of Wednesday and with the pressure having dropped the coming 36 hours or so will give holders of this catastrophe bond an uncomfortable wait, as they look to see how intense the hurricane is at the time it crosses the parametric trigger zone and whether the $110 million of Fonden 2017 Class C cat bond notes could be triggered.

Note, the latest intensity forecasts suggest that when hurricane Willa does begin to weaken it will do so relatively rapidly.

The question is where will the central pressure sit by the time the hurricane crosses the parametric box, which lies just offshore of Mexico?

The expectation is that hurricane Willa will sustain its major status, but the pressure is the deciding factor for this storm and its potential to trigger the catastrophe bond, as landfall in the parametric zone looks assured.

These World Bank supported parametric catastrophe bonds provide Mexico with an efficient way to utilise the capital markets as a source of reinsurance protection for its Fonden natural disaster fund.

The Class A tranche of notes from this Fonden 2017 catastrophe bond paid out in full following the magnitude 8.1 earthquake that struck off the coast of Chiapas, Mexico, which triggered the parametric cat bond notes and as a result Mexico benefited from an efficient and quick paying source of reinsurance protection that aided disaster relief.

A major category hurricane Willa landfall will also cause wider insurance and reinsurance market losses, beyond just this catastrophe bond. Exposure for the ILS market, beyond this cat bond, is likely to be relatively limited though.