The forecast models have been updated again and once more major hurricane Ian’s forecast path has shifted east a little further, bringing the landfall on Florida’s west coast slightly earlier and just slightly south of Tampa Bay, near to Sarasota.

The updates haven’t really lessened the outlook for a major insurance and reinsurance market’s industry loss either, with the forecast models suggesting hurricane Ian will slow on approach to Florida and confidence growing in the landfall location as well.

The NHC’s latest update suggests hurricane Ian will be at or near to major Category 4 status when it is just offshore of Florida, so that could be 130 mph plus sustained wind speeds. Hurricane Ian is expected to grow in size as well and could be a much larger storm by the time it draws up alongside Cape Coral, Fort Myers, Port Charlotte, Sarasota and Tampa Bay.

The slowing movement of a major hurricane just offshore this region of Florida could drive a really significant surge event over quite a wide area of coastline, forecasters suggest.

At close to Category 4 strength, as it approaches landfall later this week, hurricane Ian could be a significant loss threatening storm and the slowing movement as it nears land could exacerbate the time duration when the strongest wind gusts are onshore, the time a large surge is pushed onto the coast, as well as the duration of flooding rains.

As per this morning’s update, here is Tomer Burg’s forecast map for hurricane Ian, which now shows the wind speed at landfall as close to 125 mph and south of Tampa: 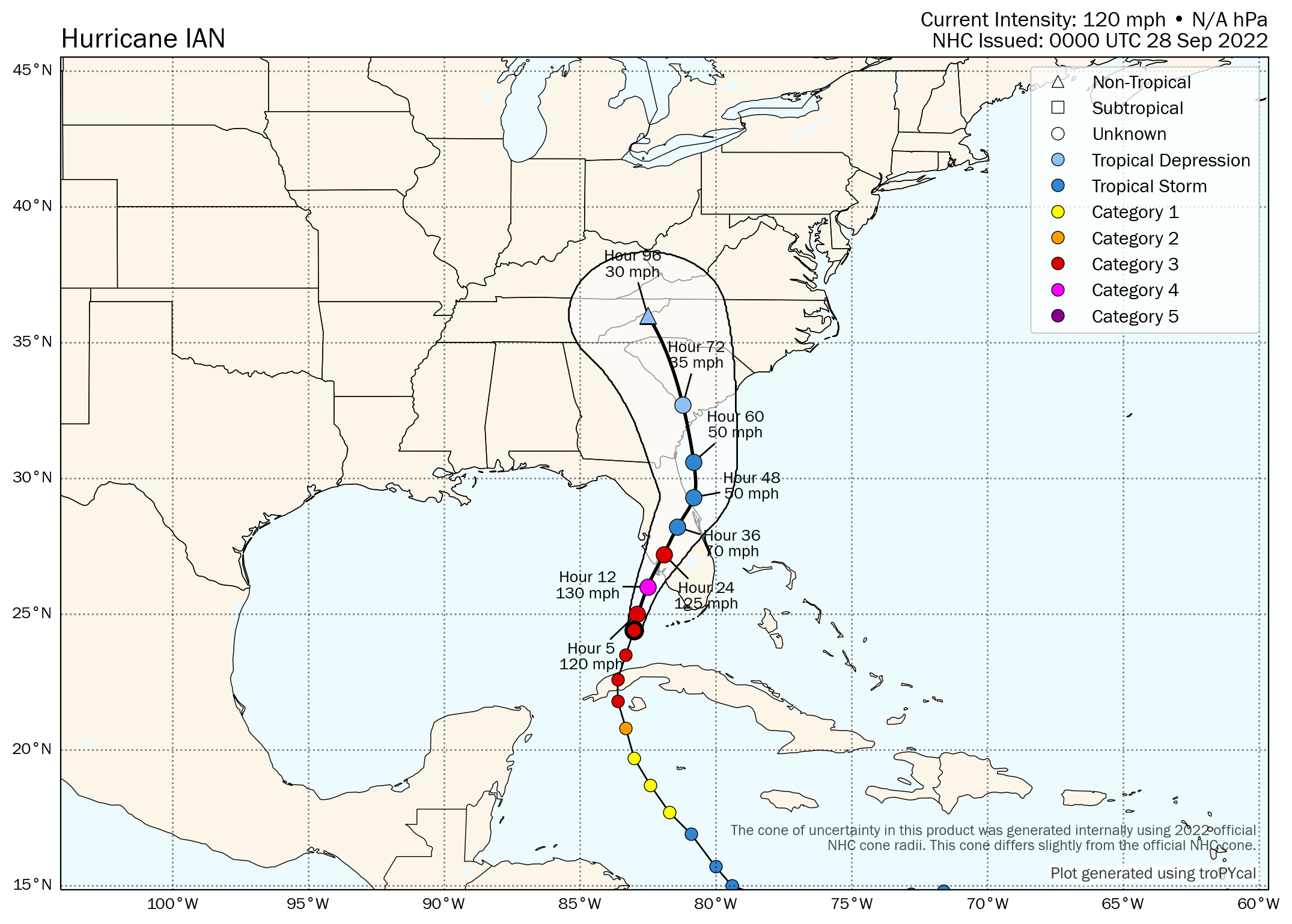 For reference, here also is the latest peak storm surge graphic from the NHC, which now shows a surge of up to 12 foot as possible and widely above 5 foot on the central west coast of Florida’s Peninsula. The storm surge values for Tampa Bay have dropped slightly, as they were previously shown as between 8 and 10 feet.

But it’s important to now watch out for any further wobbles in hurricane Ian’s path.

The changes in the forecast have come about after a slight wobble east as hurricane Ian passed over Cuba. Now over the warm Glf of Mexico, Ian will likely intensify further and could deviate back slightly west, bringing Tampa Bay back into its targets.

The NHC warns that, “Ian is forecast to approach the west coast of Florida as an extremely dangerous major hurricane.”

While the sustained wind speeds of hurricane Ian have currently declined to 115 mph, it’s expected to rapidly strengthen back towards Category 4 winds as it nears Florida, which we understand is leading to loss scenarios to increase.

As we’ve been explaining, insurance and reinsurance market modelled industry loss scenarios had been ranging from up to $1 billion to as much as $40 billion or so.

Broker Guy Carpenter had previously said it was looking at scenarios between $15 billion and $35 billion, in terms of the analog storms it likened to hurricane Ian.

Which suggests the broker still feels that’s a decent ballpark to be looking at, in terms of the eventual insurance, reinsurance and of course insurance-linked securities (ILS) market impact from hurricane Ian.

At that level, above $15 billion, there will be losses in the insurance-linked securities (ILS) space, particularly to private ILS, collateralized reinsurance and quota share instruments.

It’s harder to say whether catastrophe bonds would face any losses, although there would definitely be some erosion of deductibles for aggregate cat bonds that carry Florida wind exposure.

The chances of hurricane Ian moving further north towards the Panhandle and so resulting in a much lower industry loss event, seem to be reducing with each model run update now.

The storm seems to be getting fixed on the stretch of coastline between Fort Myers and Tampa Bay, which is a region of high-value, low elevation property development, as well as coastal commercial property.

Wobbles in the track now really matter, as these will define how much of an impact comes from wind versus water, as too will the exact track hurricane Ian takes as it moves ashore, with major cities like Orlando potentially set to feel the storms effects far from the coast. Landfall is expected Wednesday evening local time.

We’ll update you again tomorrow, when even greater certainty in the eventual path hurricane Ian takes should be available.