Hurricane Earl made landfall close to Belize City as a Category 1 hurricane with sustained winds of 80mph, the fifth named storm of the 2016 Atlantic Tropical Storm & Hurricane Season is likely to cause widespread impacts from torrential, flooding rains expected widely throughout Central America.

Earl developed into a named storm as a tropical wave that emerged off the coast of Africa a week ago passed into the western Caribbean and intensified over the warmer water. That intensification has continued and tropical storm Earl was classified as a category 1 hurricane as it neared Belize.

Hurricane Earl came ashore around 5 miles southwest from Belize City around 07:00 BST on Thursday. The hurricane is moving west at around 14mph. Hurricane Earl is expected to begin to weaken as it moves inland across Belize and then over the southern Yucatan peninsula of Mexico or northern Guatemala later on Thursday.

Wind shear has in fact prevented Earl from becoming a more major hurricane according to some meteorologists, as the storms development and intensification has been slowed by shearing that prevented the eye from becoming well-formed earlier on.

The main threats from hurricane Earl will be hurricane force wind gusts, some further strengthening is likely before it makes landfall, widespread tropical storm force winds and torrential rainfall which is expected to cause widespread flooding in the region.

Earl is expected to make landfall in Belize and could threaten Belize City, the most populous and developed city in the region, before moving inland over Belize and Honduras and eventually passing into Mexico.

Higher elevations in Belize and Honduras are expected to cause weakening of hurricane Earl’s winds and Earl will likely be downgraded to a tropical storm soon after landfall.

However the rainfall threat will persist and the NHC expects Earl to cause rainfall accumulations of 8
to 12 inches over areas of Belize, Honduras, Guatemala and the Yucatan Peninsula of mexico through Thursday night.

As Earl moves inland the rainfall threat will shift to the Mexican states of Tabasco and Veracruz from Thursday night to Saturday morning, where totals of as much as 18 inches are possible in localised areas of Belize and Mexico. Rainfall totals this high could of course result in life-threatening flash floods and mud slides.

Storm surge is also an issue, with as much as 6 foot expected along the immediate coastline and to the north of where the center of hurricane Earl makes landfall. Combined with high seas from the near hurricane force winds coastal damage is possible. 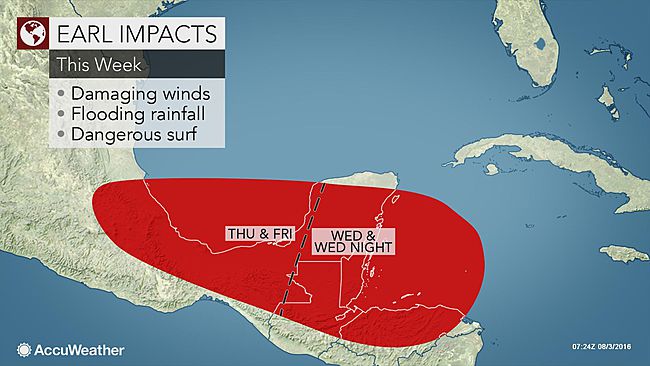 Hurricanes and tropical storms moving into this region are often overlooked, but can cause widespread damage and loss of life due to heavy rains, as well as wind damage. With Belize City potentially in the bulls-eye losses at least affecting the local insurance and potentially reinsurance sector cannot be discounted.

However, despite the fact losses in Central America typically do not bother global re/insurance markets, Earl does deserve at least some attention from the global reinsurance and also ILS sector, as some forecasters are calling for the storm to cross the Yucatan and re-emerge over the Gulf of Mexico, where strengthening could again be possible.

That could result in a double-hit scenario, which can elevate loss potential from a hurricane. It also means there is a slight chance of the storm emerging back over the Gulf and if the first landfall adjusts its track to the right, curving further northwards.

There is a minimal chance that if this happened it could put southern Texas into the frame. It should be noted that the forecasts do not call for this currently, however we’ve seen it happen before, in previous storm seasons and it’s certainly a scenario to be aware of.

CURRENT WATCHES AND WARNINGS
A Hurricane Warning is in effect from Puerto Costa Maya, Mexico southward to the Belize/Guatemala border

A Tropical Storm Warning is in effect from north of Puerto Costa Maya to Punta Allen, Mexico

DISCUSSION
Hurricane Earl, located approximately 40 miles (65 kilometers) east of Belize City, Belize, is currently tracking west at 15 mph (24 kph). Earl has been under close surveillance by Air Force and NOAA Hurricane Hunter planes and the Belize Meteorological Service radar this evening. The Air Force Hurricane Hunters found peak flight-level winds that convert to a surface wind of 75 mph (120 kph), and this was used for the NHC advisory intensity. Belize Doppler radar imagery shows that the eyewall has been fluctuating between an open and closed structure during the past several hours. There is little time left for Earl to strengthen as the center is imminently about to reach the coast. No significant intensification is anticipated before landfall. A steady weakening trend will commence after the system moves inland. Based on the latest computer model track guidance, the center is forecast to barely emerge into the extreme southern Bay of Campeche on Thursday, and this should limit reintensification at that time. Earl is expected to become a remnant low and dissipate over the high mountains of south-central Mexico by the weekend, if not sooner.

Earl continues to move slightly north of due west. The cyclone remains embedded in a well-defined steering flow to the south of a large and slow-moving mid-level ridge of high pressure. The NHC has made little change from the previous official forecast track.

After landfall, the biggest concern with Earl will be rainfall. Forecast models depict the system becoming enveloped within a much larger-scale cyclonic complex that will cover much of southern Mexico in a couple of days. This weather pattern will likely lead to substantial rainfall, with isolated precipitation totals of 18 inches possible.

Earl is expected to produce total rainfall accumulations of 8 to 12 inches over portions of Belize, Honduras, Guatemala, and the Yucatan peninsula of Mexico through Thursday night. Very heavy rain will reach the Mexican states of Tabasco and Veracruz between Thursday night and Saturday morning. Isolated maximum amounts of 18 inches are possible in Mexico and Belize. These rains could result in life-threatening flash floods and mudslides.

A storm surge will raise water levels by as much as 4 to 6 feet above normal tide levels along the immediate coast of Belize and the eastern Yucatan peninsula near and to the north of where the center makes landfall. Near the coast, the surge will be accompanied by large and damaging waves.

You can track hurricane Earl and every other storm of the season over on our 2016 Atlantic Tropical Storm & Hurricane Season page.