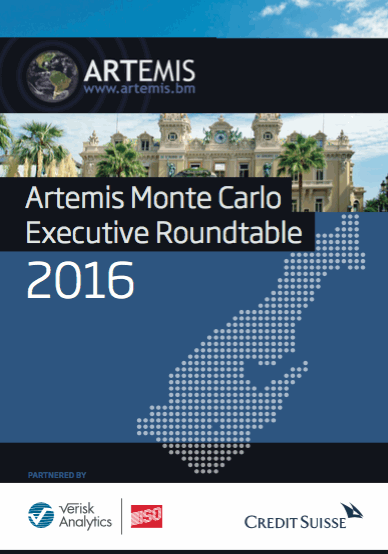 “I think the economic benefits of fully privatising risk are huge. They probably dwarf, quite frankly, terrorism and cyber in terms of opportunity,” said Richardson, in a discussion at the 2016 Artemis Monte Carlo Executive Roundtable.

Both cyber and terrorism risks are regarded as a huge challenge and opportunity for the global insurance, reinsurance, and also insurance-linked securities (ILS) markets. But a lack of deep understanding and limitations with modelling capabilities, owing to the highly complex and unpredictable nature of such attacks, has hindered the development of affordable, effective, and adequate solutions.

With the industry searching for ways to address issues like cyber and terror, with a view of doing good for society but also developing new revenue streams in new perils and regions, Richardson highlights the great opportunity for the sector to fully privatise risks that currently sit on government balance sheets, such as flood, wind, and earthquake, for example.

A number of roundtable participants stated that too much risk remains on government balance sheets, underlining the potential for insurers, reinsurers, and the ILS space to assume such exposures, which, will ultimately help to close the global protection gap (difference between economic and insured losses post-event).

Governments, explained Richardson, are certainly an element of under-insurance in parts of the world. The fact that the majority of insurance that is purchased around the world is because it’s mandatory, which is often implemented by governments, highlights the important role the public sector has to play in promoting and developing insurance solutions.

But the skills and knowledge of the private sector shouldn’t be ignored, and are willing and able to be utilised to the benefit of societies and economies across the world in the face of both emerging and more established exposures.

As discussed in the roundtable, certain behavioural inertias in some regions also influence insurance penetration levels. As an example, Richardson explained that it’s possible to get a mortgage in California, which is extremely vulnerable to earthquakes, without purchasing earthquake protection.

The impact of hurricane Matthew recently, while far less damaging than initial forecasts predicted, shows how even in mature markets insurance penetration remains lower than what is desirable, suggesting that too much risk is still sat on government balance sheets, which ultimately ends up costing the taxpayer.

Artemis discussed recently how Impact Forecasting, the catastrophe risk modelling unit of reinsurance brokerage Aon Benfield, estimated that roughly 50%, or $5 billion of the $10 billion U.S. economic loss from Matthew would be covered by insurance or reinsurance.

Furthermore, and highlighting the disparity in insurance penetration rates in all parts of the world, roundtable participants noted the recent earthquake in Italy, and the low level of earthquake protection purchased in the region. Which in part is down to the belief that the state will pay for reconstruction costs, which rarely happens, explained one roundtable participant.

In both advanced and emerging markets there is clearly an opportunity for the public and private sector to work together to create solutions that protect against natural catastrophe events. Where insurance penetration is lacking the financial burden falls on the government, and ultimately the taxpayer, so the benefits for societies and economies in all parts of the world are apparent.

For many of the exposures, particularly in mature markets but increasingly in emerging markets as well, the modelling capacity is sufficient to create a solution that utilises insurance, reinsurance, or ILS capital and skill sets to develop effective solutions. The challenge, it seems, is getting people to buy the products.

But this is where the public sector can play an important role, whether this is as far as making protection mandatory in places like California for earthquake risk, or more of an education and awareness of potential solutions type role, is something that should be discussed between the relevant public and private sector entities.

But it seems that Richardson raises a very good point; that insurers, reinsurers, and the ILS world has a real opportunity to increase profits and diversification while doing good for society as a whole, by taking on more of the risk that remains on government balance sheets around the world, ultimately fully privatising risk.

Join Artemis in New York on February 3rd 2017 for ILS NYC.
Early bird tickets will run out soon, so reserve your space today.

« Older article Cost-of-capital to be a struggle in reinsurance: S&P