The tropical disturbance known as 98L (update, now known as tropical depression 9), continues to make progress through the southern Caribbean and forecast models continue to show a relatively significant consensus for a hurricane landfall in the United States, somewhere on the Gulf Coast or Florida Peninsula around the middle of next week.

Update: More recent information on this storm can be found in this article.

98L is still anticipated to become tropical storm Hermine and then hurricane Hermine within the next day or two, although there is still a chance a tropical wave in the eastern Atlantic beats it in development terms, in which case it could be tropical storm Ian or hurricane Ian instead.

Either way, the forecast models continue to show a good deal of consensus about the potential for a tropical storm Hermine or Ian to form in the deep Caribbean, then rapid intensification is seen as possible as it heads north towards the Gulf of Mexico, after which a landfall on the United States coastline is currently the model consensus.

98L has now been upgraded to tropical depression 9, and the NHC warns, “Slow intensification is forecast over the next day or so, followed by more significant intensification over the weekend and early next week.”

Here’s a GFS ensemble model image showing the tracks of 98L, so future hurricane Hermine (or Ian) from TropicalTidbits.com:

Below you can see the latest modelled intensity guidance for 98L (Hermine or Ian), also from TropicalTidbits.com:

There is still strong agreement between the models over the chance for an intensifying hurricane, from Category 1 right the way up to major Category 4, to approach the US coastline around the middle of next week.

One of the main factors in supporting a hurricane to intensify is the warmth of the sea or ocean surface waters, which right now is ample hot enough to support rapid intensification, should all the other variables fall into place.

The Caribbean and Gulf of Mexico waters are very warm, plenty warm enough to support a major hurricane, if any storm resulting from 98L can enter the Gulf.

At the same time, the wind shear forecasts suggest this should be low enough for it to really feed off the sea temperatures as 98L / Hermine / Ian moves towards the United States.

In fact, the Gulf of Mexico looks to be widely 28 degrees C or warmer, so SST’s could be extremely supportive of an intensifying hurricane, should Hermine or Ian (whichever it is named), follow the models current forecast path. 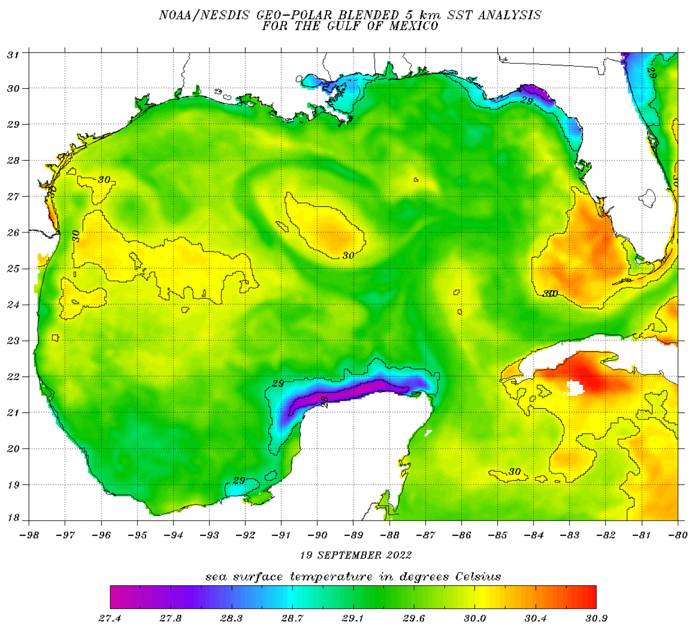 Right now, two of the main forecast models are opting for a Florida Peninsula landfall.

Below you can see the GFS model: 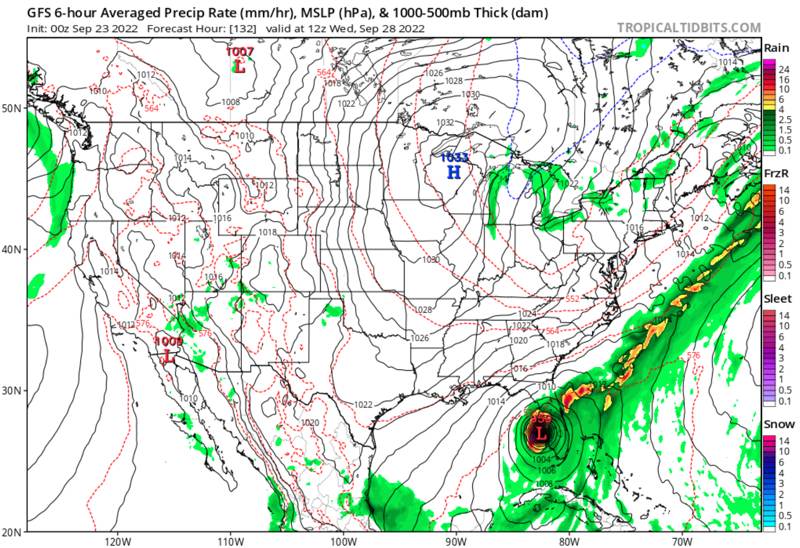 Followed by the ECMWF model: 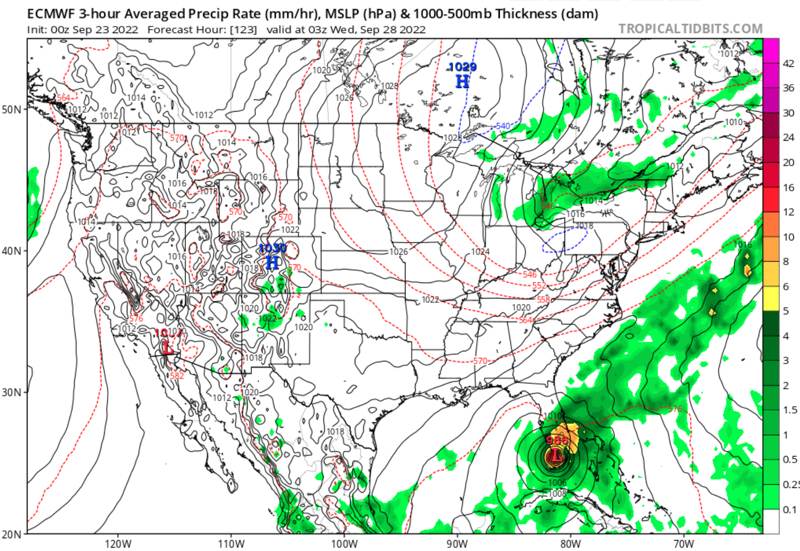 Right now, the CMC, NAVGEM, EC-Fast and ICON models are all opting for a more easterly track for 98L as it develops into hurricane Hermine or Ian.

The storm is forecast to track over western Cuba, before making an approach to southern Florida, with landfall on the western side of the Peninsula.

But there is still some uncertainty and 98L could track further west before becoming a storm, which might favour a more northerly track into the mid-Gulf of Mexico and then a track as a rapidly intensifying hurricane towards the more central Gulf Coast.

At this time it seems the Gulf of Mexico and Gulf Coast hurricane landfall solution could actually be the more impactful, for insurance, reinsurance and ILS market interests.

This is because a storm tracking directly into the Gulf and missing Cuba may have more chance to intensify and also spend longer over the open Gulf of Mexico waters, with much more fuel to intensify off the warm sea surface temperatures there.

Where as the models favourite track over western Cuba would mean the hurricane has less time over the eastern Gulf before hitting Florida.

While the insurance, reinsurance and ILS market always hates to see a Florida hurricane, in this scenario it could be the lesser of two potentially major loss scenarios.

We should add, that there remains significant uncertainty in this forecast, despite the model consensus. We could even see the storm heading further west and impacting Yucatan or Mexico, saving or weakening the blow for the United States.

But, as each day passes, the scenario of a major hurricane in the Gulf, or near to it, continues to be a possible outcome, so insurance, reinsurance and ILS interests will need to watch closely as 98L develops over the next couple of days.

Whether it’s a hurricane barrelling into Florida or the Gulf Coast, or some other scenario that saves the US from a major impact, the potential is there for the first relatively significant US hurricane season industry loss event.

As ever, BMS’ Senior Meteorologist Andrew Siffert has provided some excellent insights into the coming storm in a blog post.

Currently, the tropical wave looks pathetic, but there are two reasons why this should have the attention of the insurance industry. The first is the overall environment that Invest 98L will move into the western Caribbean late this weekend and early next week is much more favorable for development. As Invest 98L likely passes somewhere between Jamaica and Honduras, shear will drop below 10 knots, mid-level moisture will increase, and the disturbance will be crossing waters with some of the highest oceanic heat content in the Atlantic basin.

The second very concerning factor is that an anti-cyclone will develop at the upper parts of the atmosphere above the tropical convection. Developing storms feed off this type of upper airflow as it aids the storm’s outflow, often providing that fan shape one might see on a satellite image of a powerful hurricane. This upper-air pattern, along with the very warm water and low wind shear, sets up the potential rapid intensification in the western Caribbean.

Besides the uncertainty of how fast Invest 98L develops, there is a bit of uncertainty in the overall steering wind later next week. Model guidance suggests a deep dip in the jet stream over the eastern U.S. The uncertainty of this trough of low pressure depends on what happens with Fiona; but, this means that steering winds over the northwestern Caribbean in 5 to 7 days will turn more south-to-north rather than east-to-west. If Invest 98L is far enough north to feel the influence of the trough, which again has a lot of uncertainty, it would get sucked north into the Gulf of Mexico or Straits of Florida later next week.

The next named storm on the North Atlantic named storm list is Hermine. It is unclear if the system off the African Coast or Invest 98L will get the name, Hermine. The next name after that is Ian. The concerning aspect of this is that the “I” storm has been retired 12 times since 1954, most recently with Ida in 2021. “I” storms do not treat the insurance industry well. What happens if Hermine gets named out of Invest 98L? Do you remember the last time hurricane Hermine came around in 2016 and caused the insurance industry a $250M loss? Hermine caused a good amount of damage when it made landfall as a Category 1 in the Apalachee Bay area. Given the current forecast from some models, one has to wonder if history will repeat itself – but this time having a run at possible retirement once and for all.

There are all types of possible scenarios on the table for Invest 98L. Still, the environmental conditions and bathtub water look suitable for some Invest 98L to become a named storm. There is a concern that any development will be rapid and a major hurricane could result. The question if this occurs is, where will it go? The super ensemble below provides some early hits. Right now, the entire gulf coast is under watch, and of course, the intensity will be determined by track and other land interactions, so it is too early to detail specific impacts. If you are a model watcher, watch the ensemble mean. Remember, Invest 98L is not even a storm and looks horrible currently on the satellite image, so it is a guessing game with little skill.