El Niño and NAO drive climate in 2015, but not losses: Guy Carpenter

According to reinsurance broker Guy Carpenter the twin effects of El Niño and the North Atlantic Oscillation were key drivers of climate in 2015, but even with these effects the insurance and reinsurance industry only suffered $30.5 billion of industry losses.

Guy Carpenter has published its Global Catastrophe Review – 2015 report today, which explains that despite these important drivers of our climate impacting global weather patterns during last year, they did not translate into exceptional insurance or reinsurance impacts.

El Niño and the North Atlantic Oscillation were associated with an exceptional tropical season in the Pacific and the spate of severe windstorms and flooding suffered in Europe, but overall Guy Carpenter notes that 2015 was a quiet year in terms of global losses hitting the insurance or reinsurance industry.

The total insurance industry loss of around $30.5 billion was below both the 10-year and 5-year moving averages of $49.7 billion and $62.6 billion, respectively. 2015 also marked the lowest total insured catastrophe losses since 2009 and well below the $126 billion seen in 2011.

So while the climate looked ripe for losses in 2015 it has not transpired to be so, with another below average year of insurance and reinsurance industry losses. But that’s not to say the effects of El Niño and the North Atlantic Oscillation were not widely felt and damaging, the droughts in Africa being just one example of impacts which are largely uninsured still.

However, as the graphic below from Guy Carpenter’s report shows, while losses have been low over the last couple of years, the spikes in the chart demonstrate the potential for significant impact to insurance, reinsurance and ILS interests. 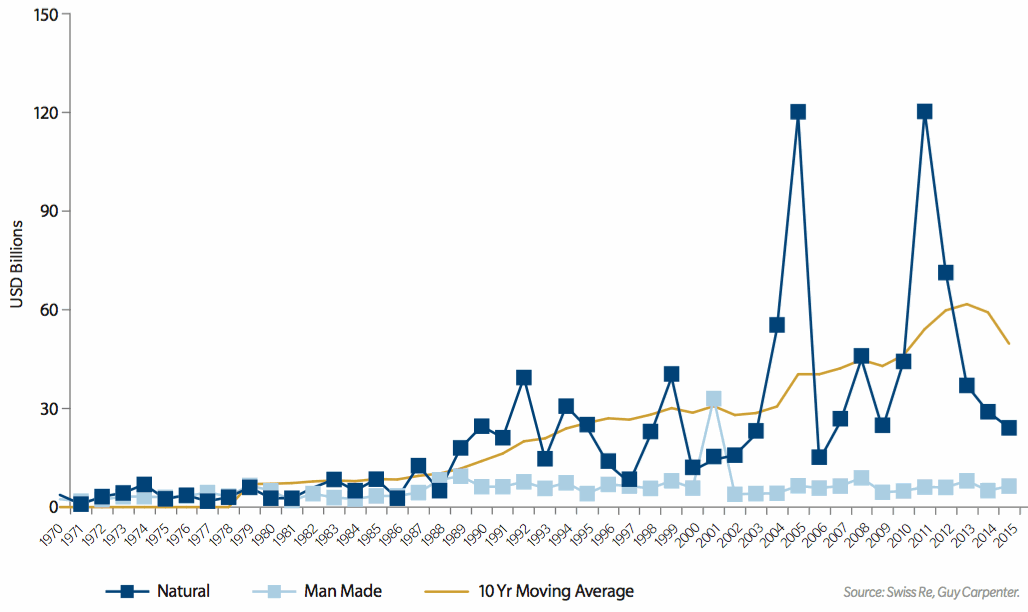 The most impactful event for the insurance industry wasn’t caused by these climate drivers, in fact it wasn’t even a natural event. The port of Tianjin explosions remain the largest estimated insurance and reinsurance loss of 2015, with Guy Carpenter estimating a toll of up to $3.3 billion.

Winter storms and recent cold in the U.S. is estimated to have caused $2.1 billion of insurance and reinsurance losses, while European windstorms Desmond, Eva and Frank in December 2015 are expected to result in an industry loss of around $1.6 billion.

A series of other events are estimated to have caused losses to insurance and reinsurance interests of over $1 billion, including the damaging wildfires in the western United States, severe flood events in the Southern Plains and Carolinas and Typhoon Goni affecting Japan, the Philippines and the Korea Peninsula.

The El Niño and the North Atlantic Oscillation is responsible for attritional aggregations of losses that will hit insurance and some reinsurance interest though, with an exceptional North Pacific basin typhoon season, flooding in North Chile and monsoon flooding in Chennai all adding to the annual tally.

Similarly the European winter storm season driven by the North Atlantic Oscillation, according to Guy Carpenter, with storms Elon and Felix affecting Northern Europe in early January, while significant flood events affected Central Italy in early March and then windstorms Mike and Niklas affecting Europe at the end of March 2015. Niklas became the largest insured loss at around $1 billion, Guy Carpenter said.