Our latest quarterly report on the catastrophe bond and insurance-linked securities (ILS) market is now available to download. The report, ‘Q2 2018 – Sponsors and investors show commitment to ILS’, analyses a bumper second-quarter featuring $5.15 billion of issuance, which drove the outstanding market to a new high at $35.3 billion. 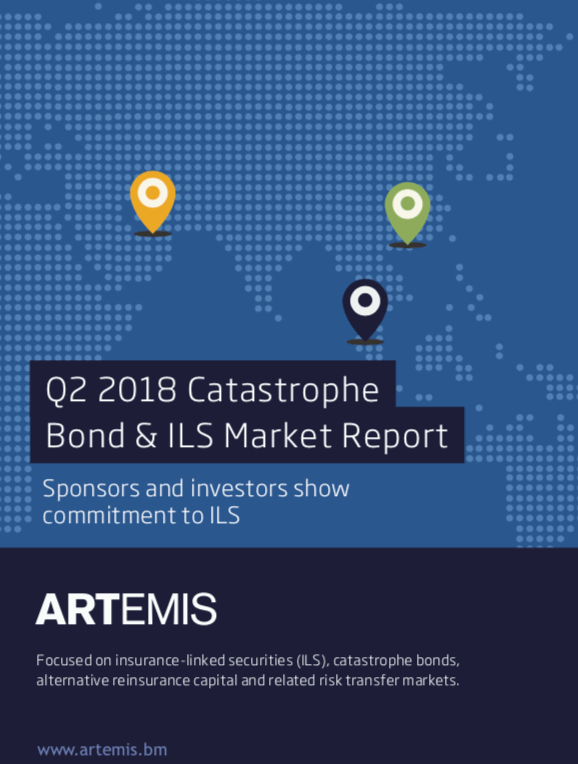 This report reviews the catastrophe bond and insurance-linked securities (ILS) market at the end of the second-quarter of 2018, looking at new risk capital issued and the composition of transactions completed during a year which has already become second busiest year on record thanks to high levels of ILS market activity.

Following on from the first-quarter which broke records, Q2 2018 didn’t, but it has become the second busiest Q2 on record and saw the trend of ILS sponsors and investors demonstrating their commitment to the market following the losses of 2017 continue.

Catastrophe bond and ILS issuance in the second-quarter of 2018 was the second highest ever recorded, at $5.15 billion from 26 deals, made up of 46 tranches of notes. As shown by the Artemis Deal Directory, the strong level of issuance in Q2 combined with the record-breaking Q1, takes H1 2018 issuance to $9.4 billion, making this already the second most active full-year ever recorded.

Continuing the trend of Q1 and despite the impacts of 2017’s catastrophe losses, both new and returning sponsors were a feature of the second-quarter, which also included some unknown sponsors of private deals. In fact, 14 tranches, or roughly $500 million of notes issued in the second-quarter were privately placed transactions.

While Q2 2018 issuance was roughly $1.8 billion less than last year, the impressive, record-breaking level of activity witnessed in 2018 so far resulted in the outstanding catastrophe bond and ILS market ending H1 at a huge $35.3 billion, which represents growth of roughly $2.4 billion in three months.

Even more impressive is that this represents year-on-year growth of outstanding cat bonds and related ILS of $6 billion, according to Artemis’ data, and growth of $4.3 billion since the end of 2017.

With H1 2018 issuance standing at an impressive $9.4 billion which, although $372 million less than the same period last year, this is already the second most active full-year on record, as shown by Artemis’ data.

With only $1.6 billion of maturities scheduled for the second-half of 2018, it’s now extremely likely that the catastrophe bond and ILS market will achieve more outright growth and that annual issuance will exceed $10 billion for the second year running.

The market appears to be going from strength to strength, and it will be interesting to see if full-year 2018 issuance can break last year’s record.

Stay tuned to Artemis and we’ll keep you updated as the catastrophe bond market continues to evolve and expand.

For full details of the second-quarter of 2018, including a breakdown of cat bond issuance by factors such as perils, triggers, expected loss, and pricing, as well as analysis of the issuance trends by month and year, download your free copy of Artemis’ Q2 2018 Cat Bond & ILS Market Report here.

For copies of all our reports, visit our archive page and download them all.