Hurricane Irma’s threat to Florida saw the catastrophe bond market drop 16% yesterday, their biggest single days decline on record, as the ILS market and its investors recognised the severe threat the major hurricane poses to their investments.

According to Bloomberg data the Swiss Re Cat Bond Price Return index dropped by a huge 16% on Friday, the steepest decline in the history of the index which tracks the value of the catastrophe bond market. 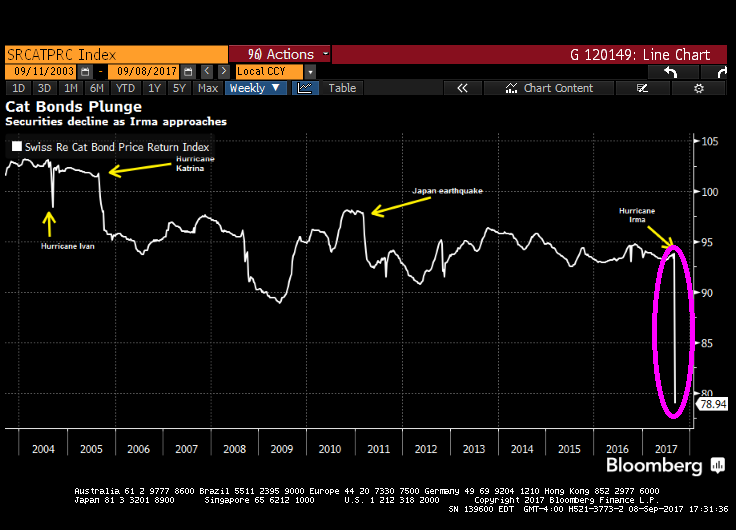 It’s a very sharp decline reflecting the cat bond investment space acknowledging the threat hurricane Irma poses and the fact that insurance and reinsurance market losses will be considerable.

Yesterday the forecast looked much worse, with the track aiming for some of the most densely concentrated insured values in the United States. This morning (Saturday 9th Sept) the track has shifted west a little further, so whether a 16% haircut to the cat bond market is accurate is impossible to say.

The Casablanca Re Ltd. (Series 2017-1) Class C notes took an even bigger haircut, with brokers pricing them from 20 to 25.

Other notables are some Galilei Re tranches, sponsored by XL, priced down in the 40’s and 50’s, the Integrity Re Ltd. (Series 2017-1) tranches all discounted by 25%, some Kilimanjaro Re tranches (sponsored by Everest Re) priced down around the 60’s to 70’s.

Many other bonds are discounted by just a few points, reflecting the market taking a haircut as a major event unfolds.

At this stage these are all just mark-to-market reductions and whatever the outcome from hurricane Irma’s impact on Florida, many of these would be expected to recover some of their value at least by Monday.

Some catastrophe bond funds may have to mark down their NAV’s based on the pricing sheets, but again some recovery is likely as it does look like the market has priced in a worst case scenario at this stage.

Investment managers at Plenum Investments in Zurich said that the scenario they foresaw for Irma yesterday could have resulted in a loss of approximately 13% of their cat bond funds NAV (+/-5% of NAV), which aligns closely with the 16% cat bond market decline.

The scenario Plenum Investments looked at yesterday, of the strongest winds tracking over Miami as the storm ran up the spine of Florida, had a potential loss attached of $106 billion. With hurricane Irma’s shift further west this morning, this may now be too extreme.

Plenum said; “We expect a massive reduction of the secondary market prices for all exposed bonds, which will be reflected in the next NAV,” which has clearly occurred.

However they highlighted that; “The range of uncertainties is still very broad and, in principle, all tracks within the cone of uncertainty are still possible.”

All now rests on the impact of hurricane Irma and where precisely it strikes southern Florida, as that will drive the losses  to the insurance and reinsurance industry that could trigger and default catastrophe bonds.

The market will now just have to wait and, like the residents of Florida, hope for the best.